Integrating cancer treatment technology that’s as yet unavailable in the UK is the challenge for architects working on the £30 million transformation of a health care centre in Newport, Wales.

Celtic Springs Cancer Centre is to be the first place in the UK where cancer sufferers will be treated using proton beam equipment. This specialised form of radiotherapy hit the headlines in 2014 when Brett and Naghmeh King took their son Ashya from a hospital against doctors’ wishes so that he could get the treatment overseas.

Atkins are the architects tasked with the design of a building that used to be a clinic aimed at weight-loss and aesthetic plastic surgery but which will become a state-of-the-art proton beam facility by 2017.

That will be achieved through internal refurbishment and modification of the existing building and two new specialist extensions – one to house a vault for the proton beam equipment, the other to accommodate a vault for a ‘traditional’ radiotherapy linear accelerator.

Mike Bool, the lead architect for Atkins on the project, says:

“The biggest challenge at the outset was working out with the client the best route to go down in terms of the proton beam and linear accelerator vault construction.

“There are several ways of doing it, including using precast high-density blocks or solid, in situ-poured concrete. The option we have decided to go with is an outer and inner precast concrete panel with a compressed aggregate infill. This forms overall radiation shielding that is up to three metres thick. We decided to go down this route because it is quick, not as weather dependent as in situ concrete and it allows you to lay cable ducts for services as the infill is being built up.”

These special measures are necessary to absorb the radiation that is generated during radiotherapy treatment. Another element of design to tackle this hazard is the layout of the entrance to the vault. Mike explains:

“It’s a bit like a maze with an indirect shielded path you have to walk to get inside so that radiation can never escape directly. With a traditional square room with a door you would have to rely upon very heavy lead doors for shielding.”

While patients are of course exposed to radiation on the treatment gantry, further protection measures include the fact that medical staff who are operating the radiotherapy equipment do so from another room that is 10m away.

Atkins is working with German company Pravida Bau, which specialises in the manufacture of the vault system that will be installed at the Celtic Springs centre. The aggregate infill method they use is known as Forster Sandwich construction®. Pravida Bau has in turn been working with medical supplier IBA, which has developed the proton beam equipment.

Atkins’ primary job, says Mike, is to integrate the new technology into the architecture as a whole but, he adds, the company is well positioned to do so with experience over the past decade of working on a series of standard radiotherapy suites across the UK.

“Proton beam technology has been around in other parts of Europe for decades so the technology is not new in a broader sense and has been widely tested. It is new to us here in the UK so it’s a learning curve but the principles of shielding and vault design are the same as standard radiotherapy.”

It is worth noting at this point that under existing regulations for radiotherapy equipment a radiation protection advisor has to be appointed for the project to give guidance on required levels of protection, and the government body National Resources Wales is also monitoring the project.

Work on the existing two-storey building is a different kind of architectural challenge. Mike says:

“We’re trying to create an open and friendly atmosphere that is not intimidating for patients and visitors.”

“People may just pop in for an hour to have a scan or they may be coming for chemotherapy in a different part of the building – whatever it is, what we’re trying to do is both create clear pathways through the building and a relaxing environment so the visit is as comfortable as possible.”

For much of the ground floor, the spaces there will be taken back to base structure before refurbishment creates “more of a spa or hotel feel, rather than that of a hospital”, according to Mike.

Nevertheless, there are special requirements: for instance, the CT and PET CT scanner areas require lead-lined walls. Mike says: “The existing structure wasn’t set up to

A review has also been carried out to make sure all the new spaces created follow Health Technical Memorandum guidelines – these are published by the NHS to set out minimums for space, ventilation and other environmental parameters. The rules also cover other aspects of service provision, including the appropriate sinks, floor and wall surfaces to be used to meet hygiene standards. Mike says:

“All these issues need to be signed off by the Healthcare Inspectorate Wales if you want to treat NHS patients. It does take some consideration to get everything compliant.”

With a project like this, another key architectural challenge is ensuring the new extensions work with the existing building – that they are “sensitive to the aesthetic of the existing building” as Mike puts it. That existing structure is steel framed with an engineering brick plinth at the base, composite metal panelling on the walls and roof, and aluminium windows and doors.

The two extensions – single storey for the linear accelerator facilities and three storey for the proton beam facilities – will increase the overall construction footprint by 40-50 per cent so how they fit in with the surrounding context needs consideration. Mike says:

“We’re looking to use similar materials in the cladding of the extensions and the proton extension is three-storey like the existing building, which helps to tie in the building lines in terms of massing.”

However, he adds: “We are looking to put in some feature elements, like perforated panels on the outside of the proton vault, that are a bit more exciting than a standard commercial building, creating a vibrant, interesting facade rather than just a solid block.”

The company that will run the Celtic Springs Cancer Centre, and two other proton beam centres that will open soon after it in Northumberland and London, is Proton Partners International Limited (PPI). The company’s Chief Executive Mike Moran draws on personal experience in his determination to do something special with the interior design at Celtic Springs. He says:

“My brother had breast cancer 18 months ago and it wasn’t the best experience sitting in the waiting room while he had treatment. I want to avoid that and make sure we have a better patient experience.”

There was a strategy behind the choice of building too. He reveals:

“We made a very deliberate decision to take a building constructed for another purpose but which already had the appropriate planning consent for clinic or health centre use. Much of the power and water services are already present so we can provide the standard radiotherapy and chemotherapy in the refurbished parts of the centre earlier as a result – before the end of 2016. The proton beam therapy takes longer to bring into commission, but that should be operational by 2017.”

“We’ve always wanted a collaborative approach to the design of the building. This project brings together technical partners like IBA, among others, Pravida Bau and our UK-based main contractor John Weaver. We’re also linking in with the University of Cardiff and the University of Liverpool on a research project.

“Throughout the design process, we’ve been benchmarking what’s available, both through the NHS and privately, to establish what’s best practice and what we need to do to have excellence throughout, which is what we’re striving for.”

Final word on the project goes to Mike Bool:

“At Atkins we thrive on anything technical and challenging so a cutting-edge project like this is very much where we sit as a company – but, at the same time, on a personal level, it’s rewarding to be involved in helping to provide facilities that we hope will save lives.” 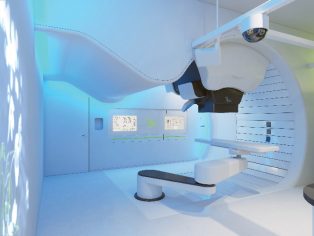