Sir Richard Rogers’ innovative offsite housing concept has been held up as a potential solution to the housing crisis, providing compact and affordable flats for sites not normally suitable for development. Stephen Cousins reports.

The UK housing crisis, that so dominated the headlines during 2015, has shown few signs of abating as we move into 2016, and younger low-to-middle income workers remain some of the hardest hit.

Average house prices rose by nearly 10 per cent in 2015, compared to a year earlier, according to a report by the Halifax, and in London and the South East graduates and young professionals find themselves increasingly priced out of the property market, forced to either stay at home and live with parents, house share, or move into expensive private rented accommodation.

The housing development concept Y:Cube, developed by the YMCA in collaboration with award-winning architects Rogers, Stirk, Harbour + Partners (RSHP), project managers Aecom and manufacturer SIG, aims to improve the situation by providing younger workers with an affordable rented stop gap before they join the housing ladder.

Y:Cube is a factory-built construction system, designed for installation on temporary or disused sites, comprising demountable volumetric “cubes” that are stacked together to form blocks of studio apartments.

The first scheme, piloted in the London borough of Merton, comprises 36 units and was handed over in September for a build cost of just £52,000 per apartment, in less than half the time required for the equivalent traditional build.

Each Y:Cube apartment comes complete with its own en-suite bedroom, living room, galley kitchen and, crucially, a front door, giving residents a sense of having their own home.

“The YMCA’s view is that to give an individual two rooms and a bathroom and their own front door is a significant move forward from a room in a house or a hostel. There is a very clear ethos around the concept of it being a non-lifetime home. The constraints of building lifetime homes in London and the South East have had a major effect on peoples’ ability to get into housing and then progressing up the housing ladder.”

The cost-saving in construction has enabled Merton Council to rent out units for as little as £148 per week, or just 65 per cent of the average market rate, well below the 80 per cent model applied to most affordable housing. This makes them suitable for younger people on low-to-middle-income, frequently those in hostel accommodation or council housing lists who have little chance of going into social housing, says YMCA.

The units operate on short-term leases, of between three and five years, giving occupants time to skill up and save for a deposit towards their own home.

Y:Cube is Sir Richard Rogers’ third foray into the realm of the prefab. His Zip-Up House, built in 1968, conveyed a futuristic vision of a pink modular home raised up on on stilts. Then, in 2007, his practice made its first move into mass produced housing with the Oxley Woods estate in Milton Keynes. The series of brightly clad, energy efficient angular terraces was initially showered with plaudits, winning the 2008 Manser medal for the best new house or housing. But, the scheme subsequently suffered problems when water seeped through cladding panels and windows, resulting in legal claims.

Is Rogers’ third attempt to sidestep the mud and mess of traditional house building his most mature and technically accomplished?

“There have been many ideas in the industry around building offsite in modular complete units, which tend to be defined and constrained by the construction technology …What we have with Y:Cube is a much more straightforward technology, comprising an engineered timber structure, built into panels and assembled volumetrically in a factory, whose simplicity and lightness make it very easy to move around.”

On the Merton scheme, each apartment was built under controlled conditions in a factory in Derbyshire, complete with installed services, internal and external finishes and insulation, then craned into position on site. This increased precision and quality (homes are very airtight and energy efficient) minimised waste and resulted in a construction cost of around £1,400 per sq m, compared to the typical £2,000 for local authority new builds.

The units are “plug and play” and can be fixed together in almost any configuration, up to three storeys high. Each is fully demountable, a feature designed to prompt councils to change they way they think about land and bring into use sites that might otherwise have remained dormant.

“One of issues in the South East is land cost and Y:Cube enables you to install units on brownfield land, land earmarked for future regeneration, or where there’s a temporary situation where land is lying idle. Schemes can be sited on such land for a period and then redeployed somewhere else in the future. It could become part of a whole concept of regeneration of ownership that has been missing up to now.”

One compromise resulting from reduced construction cost is limited space: each self-contained one-bed apartment measures just 26 sq m in size, significantly below the 37 sq m minimum permitted for single person dwelling under the Greater London Authority Housing Design Guide. The reduced size was made possible because Y:Cube is classified as temporary accommodation and therefore falls outside of the normal rules.

The YMCA claims this is size is a ‘small’ sacrifice to make for its targeted renters, many of whom live in hostel accommodation or are on waiting lists for social housing and would relish the chance of getting to live in a property with its own bathroom and front door.

This view is supported by recent research, published by property consultancy Knight Frank, showing that first-time buyers in London are increasingly ready to sacrifice space for a home near their workplace. Its 2014 study found that 45 per cent of 18-to-24-year-olds and 37 per cent of 35-to-44-year-olds would consider living in a small studio flat of around 27 sq m if it was in a central location.

Since it opened in September, the flagship scheme in Merton has attracted significant interest. Capacity studies are now underway for the five new projects, in Essex, South West London and the south coast of England, ranging in size from 15 to 36 apartments. The studies will present a detailed business plan for each of the proposed sites, including most of the information required to develop a pre-planning application.

If they go forward, the projects will be delivered by The Y:Cube Venture, a new joint venture set up by the YMCA London South West, RSHP, Aecom and SIG to provide a consolidated design and delivery service for Y:Cube developments.

Other modifications being considered include larger bathrooms and more floor-to-ceiling storage.

“Build costs at Merton were just over £52,000 per flat; we’re aiming to reduce that to sub £50,000,” said Simon Tanner, head of Y-Cube Development at YMCA London South West. “If we are building more and running more units through the factory production line, economies of scale should bring down costs further.”

The schemes might include the first example of Y:Space, a large prefabricated demountable block built using the same method of offsite volumetric construction and intended for use as either a community or youth centre.

Meanwhile, the JV is developing the brand to include Y:Home units, two- and three-bed Y:Cube units designed for couples and families.

“This would pursue the same model, aiming for high quality design and affordability, but how affordable they are will depend on where the market is when we launch,” said Tanner, who adds that the venture is in the process of applying for revolving Greater London Authority funding, which could make schemes even more affordable.

If it takes off, Y:Cube could play a key role in tackling the housing crisis, opening up new sites for development and providing a stop gap for people wanting a home but struggling to come up with a deposit. Given that 53 per cent of private tenants are finding it hard to pay their rent, according to a recent YouGov poll, it could also become an attractive alternative to rented accommodation. In other words, the numbers could be “stacking” up in its favour. 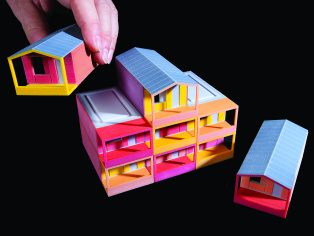