Anish Kapoor’s Cloud Gate is a highly polished bean-shaped sculpture at the centre of AT&T Plaza at Millennium Park in Chicago. The sculpture by the Indian-born British artist was an unlikely inspiration for HOK when the London office of the US architectural practice came up with exterior design ideas for a long-running new hospital.

Papworth Hospital has long had a reputation as one of the country’s top specialist heart and lung hospitals and HOK first became involved in plans to redevelop the site back in 2010, when consortia were invited to bid.

HOK teamed up with the UK arm of Swedish giant Skanska. The practice has a track record on major healthcare projects such as the Royal National Orthopaedic Hospital and the redevelopment of the home of Barts & The London NHS Trust, which was also built by Skanska.

The project was procured as a Public Private Partnership (PPP) deal and as competition hotted up, just two consortia were left in the running: the HOK/Skanska grouping and a team comprising the UK arm of French titan Bouygues and Nightingale (now known as IBI).

In June 2014, HOK’s holistic design for Skanska won the day.

“The trust told us that we won the project on our clinical design,” says Allison Wagner, an HOK vice president and healthcare regional leader Ms Wagner continues: “Our main brief was to provide a state-of-the-art hospital for the 21st Century, where they can practice medicine that is in line with the top hospitals in the world. Technically, they are a top hospital, but they didn’t have the facilities.”

The original cardiothoracic unit is situated in a bucolic site that is a 30-minute drive from where the new Papworth Hospital is being developed on the existing Cambridge Biomedical Campus.

Across the road from the new 310-bed Papworth Hospital – and connected via an underground tunnel – will be Addenbrooke’s Hospital. The proximity of the two buildings was key to the relocation.

“A lot of their patients are ill with rianmultiple problems but because the heart is the main engine they are there. They are constantly transferring patients to Addenbrooke’s and that’s where the idea came from to have the two next door to each other.”

Shifting sites will also have other benefits.

“Moving to Cambridge will help them get the top physicians in the country. Then they will be able to get the research dollars.”

The new Papworth Hospital will be a six-storey building as part of a holistic design concept that aims to reflect the park-like setting of the original unit. Features of the new design are the extensive gardens, a pond and meeting places for patients, family and staff in the main atrium, gardens and restaurant to enhance communication and collaboration across the campus.

“We want to replicate the nature and feeling of the old Papworth but to bring it into the 21st Century,’ says Mr Herbert. “The planners didn’t want to lose the green element of the site.”

Due to the nature of the hospital’s specialism, many patients are very acute and this had serious implications for HOK’s design with each of the rooms including external windows and internal full glass double doors known as breakaway doors. The treatment rooms are also in a circular area to make circulation easier.

The insistence on external windows on every coronary care unit (CCU) room is part of HOK’s ethos to combat sundown syndrome, which typically affects patients with cognitive disorders such as dementia and strikes around sundown. In rooms with no exterior windows, patients cannot determine the time of day.

“They don’t know if it’s night or day. One thing we will not do is design a CCU unit without natural daylight.”

HOK’s overall layout of the new hospital supports the Trust’s care model of creating what are described as ‘discrete zones’ for ambulatory or outpatient care, emergency services, and diagnostic and treatment functions.

Each inpatient floor has two nursing units in an innovative double corridor design that results in a compact, accessible layout. This is aimed at reducing travel distances and direct sightlines to all patients from the nurses’ stations.

“The vision that the trust had was that the patients are always visible to staff. There are four multi-bed wards but its predominantly single rooms.

“Infection control is important. What is driving it is the ability for staff to monitor patients because if they go into cardiac arrest, they need to be treated immediately.”

Each of the rooms are also the same to help circulation, flexibility and ease of treatment.

“If all the rooms are different, that is where you get medical error,” says Ms Wagner.

Fire safety was an important design issue for the client, as was the need for high quality air-conditioning. This could not be placed on the roof as if often common. Instead, at Papworth the air conditioning units are on the second floor beneath four more storeys.

“They have very high air change requirements. All that equipment could not go on the roof, as all the other floors would change to the ducts. That’s why we needed it close to the first floor.”

The first floor is the main treatment area, while the third to fifth floors are all inpatient acute care wards. Mr Herbert explains:

“What we brought to the table was flexibility for the outpatient. Like the inpatients, we made it all the same. A lot of old hospitals have a very departmental layout.

“The key driver has been to make it a simple building. There are two entrances when you arrive and only two places to go when you get inside.”

On completion, the seven-storey building will measure 33,000 square foot and include seven operating theatres and five catheterisation labs.

The structural design uses high-performance engineering systems and strategic placement of flexible support spaces that means the hospital can accommodate future growth of up to 118,000 square feet. To support this longer-term flexibility and maximise energy efficiency, building information modelling (BIM) is being used.

Sustainability is at the heart of the design with carbon emissions reduced through the specification of a large-scale ground-source heat pump system.

The proposals for the hospital also include a green travel plan for site to reduce reliance on car travel and encourage the use of public transport. As part of this element, secure cycle racks, changing facilities and showers will be provided for hospital employees.

The building is designed to achieve an EPC ‘B’ energy rating. If this is successful, Papworth will be the first hospital in the UK to achieve this measure.

Externally, HOK has specified curtain walling and this is where the influence of Cloud Gate comes in.

Ms Wagner takes up the story:

“The medical director here Steve Tsui is very excited about the design. He’s also very taken with Anish Kapoor’s Bean in Chicago. He wanted the exterior to reflect the change in elements and the change in healthcare.”

With the client’s wishes upper-most in their mind, HOK has created an external design that will do just that once construction is complete. Richard Spencer, Skanska’s project director on Papworth Hospital, says:

“The stunning architecture of the new hospital will showcase a confident civic presence that will help to attract the very best staff and clinicians, and will make Papworth a treatment centre of choice, both within the UK and internationally.”

The construction contract is valued at around £140 million but the overall PPP deal includes design, build, finance and hard and soft facilities management.

Skanska has a 50 per cent stake in the equity investment of the project with Equitix committed to providing the remaining 50 per cent. On completion, Skanska will also provide hard facilities management services at the hospital for the next 30 years.

Work is scheduled for completion in December 2017 but the Bean-inspiration is not the only extra touch that HOK have brought. The practice is recruiting artists to produce art-work for the exterior, such as Adam Ball. A graphic artist is also being selected to help with the signage, while there will also be a resident artist on campus.

Papworth Hospital might not be Cloud Gate, but it should still reflect a step change in medical design. 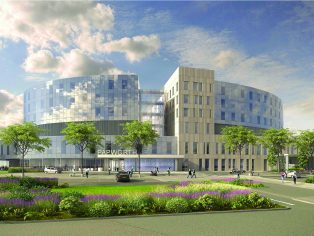 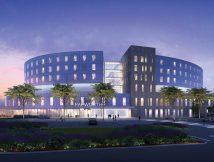 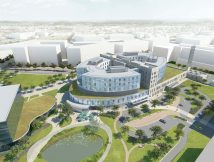 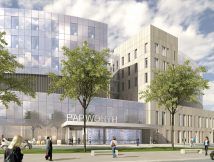 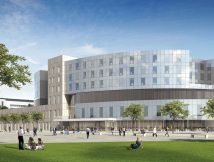