Jess Unwin learns how the special requirements of the University of Surrey’s School of Veterinary Medicine led to three separate state-of-the-art buildings – each with different design challenges to be overcome.

A new £45 million School of Veterinary Medicine at the University of Surrey has posed twin challenges for the .design team behind its creation.

The requirements of the school – only the eighth of its kind in the country and the first in the South East outside London – has meant specific functions being separated in three very different state-of-the-art buildings.

And as the first academic buildings on the university’s new Manor Park campus to the west of Guildford, the school also needs to set the right architectural benchmark for future development.

Officially opened in October by the Queen and the Duke of Edinburgh, the School of Veterinary Medicine is a part of the University of Surrey’s plans to further enhance its leading profile in teaching and research.

Since 2000, the university, which has been voted the Times newspaper’s university of the year for 2016, has invested more than £400 million in the transformation of its buildings and facilities. Most recently, the university opened its £70 million 5G Innovation Centre at its Stag Hill campus. Looking ahead, it has also obtained planning permission for a new Science, Technology, Engineering and Maths building at Stag Hill.

The expansion at Manor Park is key to the university’s ambitions and in autumn 2012 PM Devereux’s designs helped it win a competitive process to become the architects on the new School of Veterinary Medicine project.

It was clear from the outset that the school, which will have an overall training emphasis on larger animals like cows, horses and sheep, needed different types of learning environments, ranging from classrooms and lecture theatres to laboratories, clinical spaces, dissection rooms and somewhere for practical animal handling. In addition, some of these environments require a physical separation of at least 30m due to safety regulations.

A spokesman for PM Devereux says:

“Functions such as large animal practical handling are best suited to a farm- type environment and would not work well in the middle of the campus. To achieve the required facilities in a way that is suited to the campus masterplan and to deliver the vision for the new school the brief was organised into three distinct buildings.”

The approximately 6,600m2 Academic Building is the largest of those three buildings. It comprises four floors plus plant and is dedicated to classroom and laboratory learning but also contains faculty offices. Clinical skills taught here will focus on smaller animals like cats and dogs and there is a mock-up veterinary surgery to that end.

A central atrium space, which features a node-glazed roofing system, links the building’s different zones, providing circulation and social spaces plus natural ventilation for some parts of the building. The atrium and main entrance has been arranged to open up onto a new pond and along the main pedestrian route.

PM Devereux says the building has been rotated to create “the best relationship” between the sweeping central green of the Manor Park campus, bus route and other external spaces. Sited more towards the centre of the new campus, the highest portion of the building has been placed on the north side, facing land that will be occupied by future university development, to “reduce its visual impact at the edge of the campus”.

“The Academic Building will be the first of maybe four or five big new university buildings which will continue the same architectural themes and designs. So, it was important we got this design right because it’s not just a one-off but something of a template for others to come.”

Three storeys high, the Pathology Centre contains state-of-the-art facilities for ante-mortem and post-mortem examination of all animal species. A complex hoist arrangement has been installed to transport animals within the building and large viewing galleries are provided for student interaction.

Its layout is primarily driven, says PM Devereux, by “highly technical requirements”, including research and anatomy study laboratories – some of which are classified as Containment Level 3 areas and allow work with diseased or contaminated animals. The containment labs feature sophisticated effluent treatment plant, and are designed to be under negative pressure, which prevents airborne particles generated in the lab from escaping. Professor Baker adds:

“This makes our school unique – other schools don’t have this sort of facility.”

Paul Rogers, of planning consultant Terence O’Rourke, which has helped the University of Surrey draw up its masterplan for the Manor Park campus, explains:

“The nature of the activities in the Pathology Centre means it can’t sit right next to academic buildings.” As a result it’s setting is deliberately more peripheral on the campus.

“The building has to be separate and secure – you can’t just allow people to wander around in the way you might expect in other academic buildings.”

It is fronted by a modest entry and social area, while to the south, and deliberately more discreetly placed, a service yard provides the necessary space for good animal welfare and vehicular access.

On the western fringe of the campus and with a woodland backdrop, the Clinical Skills Centre is an intriguing design mix of the new and the old. A single-storey and circular structure its inspiration is clearly something like a traditional farm stable block but with a very modern twist.

The large farm animals housed in stalls here will be used for teaching best practice animal handling and clinical examination skills. In other words, as Paul says:

“This is where students will learn how to handle animals, do injections and how to be around animals without scaring them. It’s on the edge of the campus and has a paddock next to it and woodland. In that setting more of a traditional farm building look works. As for the circular nature: I believe the experts will tell you animals are calmer if they can see each other.”

Use of timber for some of the external treatments hints at a traditional farm design but the frame is steel and the building is clad in composite metal and polished blockwork. To complete the dominant contemporary feel, the building is topped off with a pre-patinated zinc standing seam roofing system.

This palette of modern materials is key to how the school’s three physically separated buildings are still united in visual identity. The similarly steel-framed Academic Building and Pathology Centre are also clad with composite metal panels and polished blockwork. Both also have pre-patinated zinc roofing.

All the school buildings are designed to achieve BREEAM Very Good rating. Materials were selected accordingly and where possible they are A+ or A rated under the BRE Green Guide to Specification.

Each building employs a heat recovery system and natural ventilation where appropriate. The latter is controlled by a building management system where practicable but manual windows are provided to give additional control over internal environment.

All glazing is high performance to reduce heat loss in winter and solar gain in summer. A brise soleil feature provides external solar shading for the Academic Building.

“It’s been a very successful project, and both I and the university are delighted with these buildings.”

He praised the work of everyone involved with their design, which has included not only the university’s own academics but also input from partner organisations including the Animal and Plant Health Agency, the Pirbright Institute, the Veterinary Medicines Directorate, Fitzpatrick Referrals, Liphook Equine Hospital and Westpoint Farm Vets.

“The School of Veterinary Medicine, only the second vet school to open in the UK since 1965, embraces the ‘One Health’ philosophy that human and animal health is intrinsically linked. The custom-built buildings are integral to the school’s innovative approach to veterinary education, which puts veterinary professionals, government agencies and industry at the heart of its teaching and research.”

As the UK’s newest school of veterinary medicine, there’s no doubt that this is not only a place of cutting-edge teaching methods but also the only school for vets with architecture that is so thoroughly 21st century. 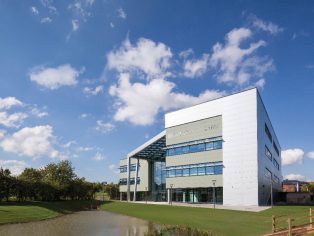 The School of Veterinary Medicine's Academic Building is an architectural benchmark for further development on the new Manor Park campus. © University of Surrey

As the UK’s only new school of veterinary medicine since 1965, its architecture, as seen here in the Academic Building, is throughly 21st century. © Nic Allen, PM Devereux