James Parker uncovers how the predictable quality offered by off-site construction using timber is being seen as a key part of solving the housing crisis.

Modular construction is the hot topic currently, against the backdrop of the need to increase levels of building to tackle the housing crisis.

It’s widely held that traditional methods are alone unlikely to deliver on the 200,000 homes a year the Government has promised. Housing Minister Gavin Barwell put his weight behind the benefits of using off-site ‘modern methods of construction’ in September last year, when he visited a development of concise homes by Pocket in Lambeth, saying it was a “great example” and he “hoped that more developers would follow their lead.”

The world of CLT (cross laminated timber) however has been making inroads into new approaches to housing for some time, with its unprecedented ability to create multi-storey buildings chiefly of timber thanks to the material’s dimensional stability and lack of shrinkage or movement post-construction. Finished in November 2010, Bridport House in Hackney is a social housing scheme that was a major coup for the advancement of CLT, as the UK’s tallest timber building at eight storeys. Designed by Karakusevic Carson Architects, it was built in 12 weeks by Wilmott Dixon using a timber system from Scandinavian firm Stora Enso.

And as architect Rory Bergin of HTA recently reported in ADF following a visit to Legal & General’s new £50m factory in Yorkshire, that company is an example of a major player in the housing market investing heavily in CLT as an alternative solution to delivering the huge numbers of homes that are needed.

However, it’s not just about the speed of assembly which is possible – further helped by factories’ ability to assemble panels for houses in all weather conditions, 24 hours a day. Off-site modular construction can, many believe, also deliver higher levels of consistent quality than is commonly seen across the volume housebuilding sector.

With increased density requirements meaning that multi-storey is the only sensible answer in urban areas, CLT is now being seen as a realistic solution. Not least because of the thermal and acoustic insulation benefits it can bring, in addition to its low carbon credentials, factory-made precision, and design flexibility.

Innovators in CLT include Carbon Dynamic, whose breathable system of rigid wood fibre boards and continuous CLT panels is produced to exacting standards in the company’s factory in Scotland. The firm claims to offer a very straightforward, collaborative approach to clients, and provided vapour barrier benefits as well as avoidance of thermal bridging at Scotland’s first modular affordable housing scheme, Kendall Court in Alness.

At the end of 2016 CLT producer Stora Enso launched its Modular Building System at an event in London, as a free resource following on from its earlier residential-specific Multi-Storey system launched in April. This was a clear sign the company believes that there is sufficient interest in CLT to justify investment in a full-blown system – and accompanying manual – including structural calculations, design and installation considerations, and country-specific regulations compliance.

The firm’s business development manager Gareth Mason spoke at the event, placing the potential offered by CLT as well as thinner-layered LVL (laminated veneer lumber) in the context of last year’s Farmer Report which challenged the construction industry to “modernise or die.”

He pointed out that Mark Farmer’s report, for the Construction Leadership Council (CLC) recommended that the Government “should act to provide stimulus to innovation in the housing sector by promoting the use of pre-manufactured (offsite, modular and volumetric) solutions through policy measures.”

Mason also held that CLT was the “quietest form of construction” making it particularly useful on sensitive sites, but showed that overseas projects are leading the way. In Vancouver a 53 metre, 18-storey CLT block for the University of Columbia has completed four months ahead of schedule, and Lend Lease’s International House in Sydney is Australia’s first engineered timber office building – a stunning glass and timber showpiece. Mason concluded by saying that the “advantages of the material are known; it is now a question of how to design and plan using it, and doing the feasibility.”

Nordic countries have seen strong innovation in modular timber across a range of building typologies. Finnish architectural practice OOPEAA designed the Puukuokka social housing building in the west of the country as Finland’s tallest residential timber construction, thanks to the qualities of CLT. The larch and spruce-clad scheme for housing association Lakea won the Finlandia architectural award in 2015, and has been shortlisted for this year’s Mies van der Rohe Award. Each apartment is composed of two modules, one housing the living room, balcony and bedroom, the other – the bathroom, kitchen and foyer, and thanks to the Stora Enso CLT modules being the primary structure, no columns are needed.

OOPEAA’s Anssi Lassila is firmly wedded to using CLT and LVL timber in a wide range of sectors, particularly with acoustics standards being tighter in Finland compared to the UK as well as sustainability being a key requirement for many projects. He told attendees at Stora Enso’s launch event: “It works as a construction material not just as decoration. But it helps create a better atmosphere that feels like home.

Lassila also emphasised the benefits of modular and volumetric construction as a way of quickly alleviating housing shortages: “The modular process is very short – it took only six months to build 70 apartments at Puukuokka, and it is faster to take down than any other building solution” he said. “This means it is possible to transport these buildings and reinstall them in a different location in the future if they are no longer needed for their present use.” He also alluded to some of the key requirements for constructing with CLT to optimise its benefits, such as having “separate wet and dry elements.”

He explained that the project’s energy efficiency is benefitted as the separation that the timber modular elements provide means “a hallway can be colder without making the apartments cold – different temperatures can be maintained.”

Lassila said that while the acoustic qualities of the material in use at Puukuokka had been borne out,  with some “very good feedback from residents,” the possibility exists to develop “even more flexible and diverse modular systems in the future.” Concluding, he said “Now is the time for timber.”

It is not just happening in enlightened pockets of the world however. The UK is beginning to catch on more widely, for example social housing provider Swan Homes has taken up the gauntlet and decided to build its own CLT factory to produce family houses in Basildon, Essex. Paul Williamson, managing director of modular construction at Swan Homes, spoke at Stora Enso’s event at the end of last year, hinting that the organisation has ambitions to go higher.

He told attendees: “We started looking at modular construction in 2014 to help us meet growing demand for homes in the south east and decided on volumetric CLT because we wanted a system that could deliver homes from one storey all the way up to 12 storeys.”

Williamson added: “With CLT we can, relatively easily, produce thermally and acoustically efficient homes. Also, the fact the material is sustainable and able to be recycled is key to our sustainability agenda. He said that with Brexit “likely to make labour shortages worse, certainly in London,” the ability to produce homes in a factory was even more important.

He admitted that CLT “does have constraints, like other materials, you just don’t think about it with them as we’ve been using them from day one.” He concluded: “One of the major benefits for us is that CLT is easily machinable and that allows us a great deal of flexibility in the manufacturing process. We were always keen not to have the tail wag the dog, we want an architectural solution that has an engineering solution worked around it.”

There may remain a number of cultural challenges to address before CLT timber buildings are widely accepted in the UK, particularly for medium-rise developments, but major forces are mobilising to increase its presence in the market. While QS’ may still be reluctant to exchange steel and concrete for timber, when the cost benefits in the construction phrase – alongside the quality benefits – become more widely demonstrated they will have to sit up and pay attention. 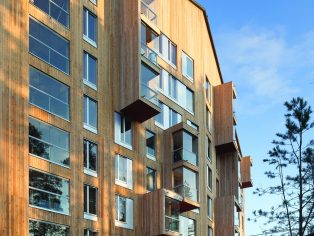 Puukuokka, an eight-storey modular CLT apartment building in Finland by architects OOPEAA, has been shortlisted for the Mies Van der Rohe Award