Michael Willoughby ventures into Soho House’s new eatery to discover how its in-house design team worked against the clock to turn a former dance club into a cosy Art Deco retreat with a Jazz Age feel.

One of London’s most sophisticated new dining rooms, Soho House’s brasserie Cafe Monico, is, at least in part, a work of improvisatory elan. Mere weeks before construction commenced, the leading hospitality group’s in-house design and construction team were still reworking plans for the Shaftesbury Avenue property’s ground floor to fit in new customer washrooms, kitchen and off-duty staff area. The colours of the panelling, the bespoke furniture and the location of the staircase were also chosen onsite.

From the first concept meetings with the landlord (theatre impresario Cameron Mackintosh) in June 2015, the firm worked against the clock to ensure Cafe Monico was open for business 10 months later, in April 2016.

“In an ideal world, everything would have been done before,” says Soho House design director, James Waterworth. “But we wanted to gut the building and see how things would sit on site.”

Waterworth’s team comprises 60 interior and architectural professionals but also a construction team, so there’s no delay in implementing design ideas.

“We have a certain way of working,” explains the design director. “We work alongside them, right next door to them. There is a lot of back and forth. All this means that it would take a long time for an external design company to get their heads around it.” He adds: “There is not a huge amount of time to have things signed off”.

Such time constraints are a result of Soho House & Co’s frenetic recent activity: Waterworth reckons about 20 other projects are currently underway, but there’s a reason why Cafe Monico, sitting cosily in the heart of the West End, is special. “It’s the first stand-alone brand we have created in a while,” he says.

After setting up the Soho House brand, soon the darling of the global metropolitan smart set, the company founder wanted to create a classic European brasserie. Founded in London in 1995 as a private members’ club for people in the creative industries, Soho House & Co has since opened clubs across Europe and North America, as well as restaurants, cinemas, workspaces, spas and bedrooms. Cafe Monico is the group’s latest venture.

When the designer tells you the former occupant of the property was another club, you automatically think ‘fine dining,’ but that’s surprisingly far from the truth.

“It was a proper dance club,” Waterworth says. “It was pretty grimy.” So the place needed a narrative to give it character and integrity. “We wanted to make the place feel like it had been there for 70 years,” explains the designer.

Inspiration was taken from the name of an 1870s restaurant which had been run by two Italian brothers. Soho House researched the menu of the old place and discovered the brothers used recipes sourced from across the continent. The now-defunct brasserie also catered for theatre goers.

To broaden the search, the team looked at European examples from the same era, focusing on Paris, Vienna and Milan, and was inspired by art deco references. This type of hard modernism is classy, but not always that cosy. To soften the space, the Cafe Monico designers added textured fabrics.

As a result of the pan-European influences, not least the food, the feel of the space is a French-Italian mix. The eatery is split into two areas, one on the ground floor, the other in the mezzanine. The Soho House team re-designed the ground and first floors and expanded the mezzanine.

The key idea for the brasserie was to allow theatre goers to pop in for a pre-show meal in a less formal environment. The quicker pace at street-level is underlined with hexagonal tiles, and the open kitchen keeps the pace going.

Diners who want to take their time will feel at home upstairs: the level features a softer floor of reclaimed wood in a geometric pattern while a 3 metre antique glass and brass chandelier dominates the centre.

Green leather banquettes designed by Waterworth’s colleagues and created by the in-house joiner are placed throughout, and the lighting was also designed by Soho House.

The main highlight however is the staircase. Waterworth muses:

“It really holds the atmosphere, it’s the hub of the space leading to the mezzanine where you can see what’s going on, and there’s a particularly good view of the open kitchen.”

While the staircase structure it replaced may have had its merits, it was in the wrong place, eating into the room. The mezzanine structure was extended to create the new opening, and tie in the mezzanine to the facade as it was re-clad.

Harder to create was a sense of instant longevity to the place, an attempt to achieve this has been made through art. A skilled painter was hired to create a patina on the ceiling with individual brush strokes.

“It’s like trompe l’oeil with a huge amount of detail involved,” explains Waterworth. “One of the tricks is to put more paintwork in the corners to create depth.”

The structural works had the added benefit of creating more storage space. The design director adds:

“We wanted to make sure the kitchen was of a sufficient size with enough cupboards and surfaces. At the same time, we think it’s important that staff have a decent sized area in which to relax.”

“Finally,” he adds, “the bathrooms need to be big.”

The space constraints meant a compromise had to be made if all elements were to fit in.

“Luckily, the ceilings in the building are large,” Waterworth continues, “so we were able to store the less-used kitchen items higher up and create more space for the other areas.”

The building’s facade was also vital to the look and feel of the Cafe, with improvements and additions to signage, the inclusion of planters and pavers within the site boundary. Planning was most critical for the facade design, where the whole frontage had to be re-integrated into the overall building design.

A swift planning process was required with such a limited time frame, and Soho House’s previous experience working alongside Westminster Council gave the firm a key advantage.

“We know how they work,” confirms Waterworth. “It was mostly making sure it was keeping with what they had in mind and that the facade remained in keeping with the rest of the building.”

Thanks to some inspired improvisation, the cafe’s Jazz Age feel was successfully realised ­– the team has achieved a very smooth result. 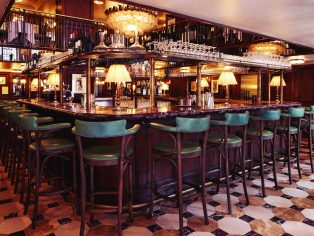