Canny architectural design should be able to help meet both the UK’s desperate need for more affordable homes and ease the qualms of those with reservations about change in their neighbourhood.

Those are the goals architects are committed to achieving on a £5.25 million project to build 34 one- and two-bed flats for rent at a site owned by Riversmead Housing Association (part of Network Housing Group) on the eastern boundary of east Hertfordshire town Ware.

Architectural, property and construction consultancy Pellings was originally set the task of looking at the housing association’s numerous properties for possible redevelopment. Against a backdrop of lengthening waiting lists for houses and flats to rent, Riversmead wants to build 500 more affordable homes for local people in Hertfordshire and the surrounding Home Counties.

With the price of land at a premium, it and other such organisations are re-examining their existing housing stock that was built in the ’50s, ’60s and ’70s. Many are concluding that associated garage blocks, many of which are no longer being used for cars, are not the optimal use of land in the 21st century.

One Riversmead site that was identified was a block of 27 garages in Cozens Road in Ware, but it was soon recognised that there could be an opportunity to expand the development. Neal Penfold, urban designer with Pellings, explains:

“With a typical garage site you’d achieve maybe 4-6 homes, and this site would have been the same.” He continues: “Next to the garages were 12 maisonettes – three blocks each containing 4 homes – with very big back gardens. We put it to Riversmead that we would have the opportunity to create a more substantial development by incorporating those properties into the site.”

Riversmead agreed with the new idea, which would involve buying out leaseholders and rehousing tenants at the existing maisonettes. However, while the housing association’s wider building programme elsewhere in the town got under way, the Cozens Road proposals proved more difficult to realise.

Consultation with planners and local residents continued after concerns were raised about the number of proposed flats, extra vehicles entering and exiting the site and visual impact on the street as a whole. The plans were adapted to accommodate one road onto the site instead of two and to resolve access issues for residents neighbouring the development. Neal says:

“We’ve also adjusted the number of parking spaces as we’ve progressed with the proposals. We started with a one-to-one ratio (one space for each flat) but through consultation with planners and residents that provision has steadily increased to address concerns about street parking. The final total is 52 parking spaces.”

Criticism over visual impact centred on one section of the development: the two flat-roofed and three-storey blocks of flats, known as blocks A and B, which front onto Cozens Road. Neal says:

“The planning authority felt that our three-storey plans for blocks A and B would be overly dominant in the street scene so we moved to a design where the top storey was recessed, reducing the mass and impact of building on street scene. This means the top floor is set back between 2–4 metres from the front and sides of the building, producing an inset floor.”

The willingness to accommodate all these design changes reduced the original proposed number of flats from 38 to 34, with blocks A and B providing 13 flats each, and blocks C and D – which are two-storey and feature pitched roofs – providing four flats each at the rear of the development.

Riversmead’s proposals were approved on appeal earlier this year. The planning inspector’s appeal decision noted that affordable flats were acknowledged by the local council as being of the “highest level of need in Ware”. It continues: “…residents, along with the council, have raised concerns relating to the flat roof design for block A and B and I acknowledge they would introduce a new design feature not found elsewhere along Cozens Road. However, I consider that due to the third-storey set-back it would be a relatively muted feature in the context of the two lower projecting storeys. At street level, these front elevations, rather than the flat roof elements, would be the focal point and principal attracting features in drawing the eye…”

Construction work in Cozens Road should now get under way this autumn. Ahead of that, Neal says:

“Our brief was to provide modern homes and not be too constrained by any architectural influences close by. However, we’ve obviously referenced materials so, for example, we’re using traditional brickwork, but we are using the materials in a modern way. We talked about this with planners and the principle of adopting a modern approach was what was agreed.” He adds: “The building’s street facades are broken up into distinct sections so they’re residential in appearance and scale and the contrasting materials, yellow and grey brick and also the lightweight metallic panels for the recessed floor, create a depth and interest in the street scene.”

It’s an approach praised in the planning inspector’s appeal decision. It says that with “…use of yellow brick, glazing and grey panels to punctuate the principal frontages…the proposed development would add to local distinctiveness and complement the character and appearance of the area”.

Structurally, the four new buildings will feature load- bearing masonry, precast concrete floors and trussed rafters. Photovoltaic solar panels and green sedum roofs are planned for blocks A and B. To meet environment and sustainability building regulations, the development will follow a ‘fabric first’ approach: energy efficiency through how the flats are constructed rather than bolting on extra features. It’s planned that the homes will also have mechanically ventilated heat recovery, which recycles heat within the residence. Conditions for the approval of the development also include sustainable surface water drainage and an inspection to check if bats use the site for roosting.

Neal is pleased with the landscaping plans for the development:

“We’re introducing significant tree-planting and as much green as possible throughout. We’ve certainly made a big improvement to the space in front of blocks A and B in terms of public realm. There will be an attractive planted area in front of these blocks that’s not dominated by cars.

“Each flat has its own balcony or dedicated private terrace for the ground-floor units. We’ve introduced planting as a buffer between the terraces and parking and pathways.”

Inside, the flats will be compliant with guidelines set out by the Homes & Communities Agency, the UK government’s housing, land and regeneration agency, which is also the regulator of social housing providers in England.

Neal explains that the internal designs also need to be lifetime homes-compliant – a set of design criteria intended to make homes more easily adaptable over time.

“It’s future-proofing them. For example, providing the drainage for a wet room in bathrooms instead of bath.” He continues: “While these homes won’t be set up for people with disabilities, the aim is to make them flexible enough for design changes to accommodate changing needs because of age or health.”

When the flats are completed, Riversmead, which is a not-for-profit organisation that owns and manages over 4,300 homes across Hertfordshire, Bedfordshire and Buckinghamshire, will work with the local council and the Housing Needs Register to find tenants.

“With the huge demand for affordable rented property, we needed to look creatively at providing local solutions. The Cozens Road development is a great example of us working well with architects and development partners to consider the local landscape and people’s need for good quality affordable homes. We’re passionate about providing the homes that people really want in this part of the South East.”

Neal says the Cozens Road project is one he’s enjoyed working on:

“The garage sites in general are quite challenging design-wise. They’re often leftover spaces that weren’t originally intended to have houses on them so from that point of view it is interesting to find ways to make them work.

“In many cases these garage sites are just not being used for the purpose they were designed for. A lot is said about the extent of displaced cars that will be parked on the street but the reality is that 80 per cent of these garages blocks don’t have cars in – they’re too small for modern cars and are just used as storage areas.

“What we’re doing is recycling space and structures and getting much better use out of them. I feel this is effective use of brownfield land, creating much-needed new homes. It’s an understandable and common strategy among housing associations because land values are so high. This represents much better use of their existing resources.” 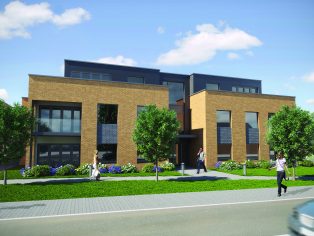