Architects, contractors and suppliers to the brick industry gathered at Arup’s UK head office recently to hear how the quintessential British building material was seeing a resurgence in a range of urban regeneration projects in London and across the UK. The audience invited by the Brick Development Association heard how brick’s aesthetic possibilities are increasingly being exploited, although there are supply challenges.

Architects are relishing the opportunity to harness the qualities of brick facades from traditional urban terraces to high-rise commercial and mixed-use schemes. Increasing numbers of projects show designers combining brick’s familiarity and longevity with clean modern lines of urban design which it facilitates.

Alexis Harrison, associate at Arup gave a fascinating presentation on design in ceramics ranging from brick’s abilities to create smart and innovative commercial brick facades to the possibilities of 3D printing extruded clay buildings in global areas of need. He said that when he entered the industry as a designer at manufacturer Ibstock in 2001, brick was “deeply uncool” but “the world is now a different place – two of the last three Stirling Prize winners were brick buildings; in 2001 no brick buildings were anywhere near the shortlist.”

Harrison told the audience that “we are in a paradoxical time where architects want to mix high tech with craft – the tectonics of architecture” and brick is being used to achieve this.  He gave credit to manufacturers who were creating artistic bricks which were “crafted with love and care.”

Peter Murray, chairman of New London Architecture, claimed a New London Vernacular was being seen across the capital with leading architects employing brick facades within residential designs influenced by years spent working in urban housing in the Netherlands.

Murray said that the resulting buildings were emulating the traditional Georgian London Terrace, including residential buildings by David Chipperfield and Martin Richardson which were delivering “highly considered plans” with a keen focus on materiality driving their choice of brick elevations. Harrison agreed that modern Dutch design including big brick soffits has “found its way into the New London Vernacular.”

The new chief executive of the Brick Development Association, Andrew Eagles, told the audience 93 per cent of people surveyed across the UK preferred masonry-built houses. He added that the brick industry had made significant investment in tackling post-recession supply challenges to meet demand: “We recognise there have been issues but the industry has stepped up to deliver.”

Speakers addressed the housing crisis and the need to build faster as well as better to solve the problems. Eagles said: “The unaffordability of London housing is starting to impact on UK competitiveness. If we are going to reach the challenging targets on housebuilding, we need to go beyond the 10 per cent rise in completions we achieved in April.”

Peter Murray said that London needed to provide 60,000-70,000 new homes per year to keep up with demand, and it was currently building 18,000. He joked: “The problem is that every time we start building more the price of bricks goes up.” There was some discussion on solutions for delivering the demand needed including the merits of brick slips versus traditional solutions.

Murray’s information-packed talk included key current examples of brick projects in and around London including Rainham Library (Maccreanor Lavington Architects) whose “crisp form used punched brick to give a clean, contemporary line,” as well as Lifschutz Davidson Sandilands’ designs for the first phase of Berkeley Homes’ 4,000 home Kidbrooke Village development and a playful residential block at Brentford Lock West by Duggan & Morris and contractor Wilmott Dixon. However it was the high-rise planned by Allies and Morrison for Nine Elms in London which was the real eye-opener among his selection– rising over 20 stories to provide a Manhattan-style brick monolith.

Murray revealed that while at 2008 Venice Bienalle influential British architects including Tony Fretton had caused controversy by championing brick design with traditional influences it was now bearing fruit with a plethora of successful schemes in the capital. He said this was also driven by the GLA’s most recent London Plan, which “discouraged iconic architecture, instead looking to create great background buildings that weathered well and had longevity.”

Murray celebrated the “clarity of detailing” in many resulting low-rise London brick-skinned buildings, but pondered with brick supply still an issue, “who knows what will happen if we actually started building the 60,000 homes we need per year, whether in brick or brick slips?”

Lee Marley, MD of Lee Marley Brickwork said the firm’s current job list of 40 live projects (mainly in London) was a clear demonstration that “brick is back in fashion.” However, he added this was not without its challenges – “schemes are getting bigger, people want it done quicker but to the same high quality standard.”

He discussed logistical challenges on urban sites and also gave examples of how brick craftsmanship was still being demanded and unusual aesthetic briefs were common such as the seemingly random gradated elevations on the Trafalgar Place development at London’s Elephant & Castle.

Alex Gordon, associate director at architect Jestico+Whiles, presented a major regeneration project in Leeds showcasing brick’s relevance to provide a link to the past as well as provide crisp modern architecture. The Homes and Communities Agency scheme is turning the Victorian industrial area of Holbeck in the city centre into an “urban village” where new commercial and residential buildings mingle with listed buildings creating a dynamic quarter with new public squares planned around three historic brick towers. Gordon said the project “used brick in a muscular and simple way” and showed how it exploited the potential of brick detailing to express and reinforce visual elements within the elevations. 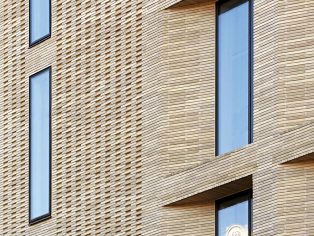