A practice run by two sisters, T Sakhi is embracing the challenges as well as potential of their home city, Beirut, in order to make architectural interventions which help improve urban living in a difficult context

Based in Beirut and Milan, T Sakhi is an architecture and design studio co-founded by Lebanese-Polish sisters Tessa and Tara Sakhi, whose stated aim is to produce “designs that provoke new modes of human interaction, questioning our contemporary understandings of identity and living.”

The manifestations of this intriguing – and artistically interpreted – proposition have recently included a “series of urban interventions” across the formerly war-torn city the firm calls home. The project, called ‘Holidays in the Sun’ saw the firm making a similarly empowered stance to the ironic Sex Pistols song it alludes to, turning the metal security barriers seen all over Beirut into stools and housings for greenery.

The project was an attempt to bring some respite to the citizens of a city not only rife with political instability, but also unfinished construction projects. The practice notes: “The only real public spaces in Beirut are the streets; the city is over-constructed, congested with buildings and construction sites. There is barely any greenery for the citizens to enjoy or to feel free in their own city.”

T Sakhi’s work gives the local community a chance to engage with what public space there is.

Origins
The firm’s genesis occurred “very organically,” says Tessa Sakhi. From their time studying for their degrees together, they have enjoyed collaborating on projects. “When our first client came to us (for an interior project), it was only natural to start working on it together. We haven’t stopped since then,” Tessa explains.

A couple of projects later, in 2016, the sisters decided to set up their own studio, “while maintaining a flexibility for our common and separate interests.” Tara admits that their diverse range of skills – centred around architecture but extending into a myriad of creative endeavours – could be a double-edged sword: “In the beginning, people often asked us whether we were architects, designers or artists. Our response was we simply do what we love and what moves us. We are curious to intersect our different interests and watch the results.”

T Sakhi puts the emphasis not on different ‘disciplines’ but rather on “ways of thinking,” says Tara, expressed in architecture, product design, installations or even film. Her sister Tessa adds that they enjoy working with craftsmen, designers, musicians, sculptures, writers, and filmmakers, to “enrich the experience of each project,” and asserts that they are “fascinated by imperfections, and traces of time on materials, as a benefit.”

Clients from a range of sectors have bought into their vision, from pop-up nightclubs to high end restaurants, to private residential projects. Further examples include a glass-blowing workshop in Murano, Italy, and an ‘ecstatic experimental dancing space’ in Tulum, Mexico. Further raising its international profile, the practice has created its first Lebanese pavilion for the fifth edition of Dubai Design Week’s Abwab’s architectural exhibit, taking place this month. Tara explains that it will consist of an “interactive wall portraying the socio-political barriers in our society,” which will mean a “psychological and physiological journey for visitors.”

Sisterhood
Tessa admits that in their early months as a duo, despite their close relationship, “it was challenging to work together, because there were no obstacles or boundaries established between us as sisters.” She adds: “It took us a couple of years to understand and calibrate the dynamics of our working duo and to establish healthy boundaries to be inspired and productive.”

However, she says that their shared upbringing “helped us acquire a similar way of thinking and adapting to certain situations, as we lived through the same experiences.” The studio benefits from integrating their distinct interests outside building design – Tara’s passion being films and photography,” Tessa’s being “social and humanitarian practices.”

When defining a concept for projects, they brainstorm separately, then present the ideas to each other. They then interrogate these collaboratively, and “bounce back and forth our inspirations and drawings until we are both ready to present it to our clients,” says Tessa. Tara adds: “It is interesting to observe how two different inspirations can merge into one solid idea.”

They are both constantly travelling, whether separately or together, “experiencing diverse surroundings and getting inspired,” says Tara. Their familial mixture of Polish and Lebanese cultures, as well as the mix of western and Arabic culture in their home city of Beirut, helps them be “conscious of hybridity” – they say these notions are “at the core of each project we undertake.”

The pair say that creating their recent street ‘interventions’ in Beirut raised interesting issues, in terms of how such projects need to accept how people may want to use designs, but their experience of the city gave them resilience. “People are constantly surprising us with new ways of using our designs,” says Tessa. “It is fascinating for us to observe them appropriate the objects according to their understandings, identities and ways of living.”

She says that despite encountering “various difficulties” in the installation, “growing up in a country in constant resilience, we learned how to acknowledge any obstacle and transform it to our advantage.” The best reward, Tessa adds, was “seeing how different people interact diversely with the installations, bringing them to life and giving more meaning to them. It’s all about creating designs that trigger citizens with a feeling of joy, freedom and playfulness.”

Recent works
The practice’s latest project is a small restaurant and grocery called Adar in the historic Passage de Panoramas located in Paris’ 2nd arrondisement. The sisters “looked to demonstrate new and evolved ways of expressing culture in a Middle Eastern restaurant without falling into clichés of orientalism and grandiosity,” instead representing it through “scents, colours, touch, filtered light, and taste.”

They were inspired by the “raw colours of the landscape,” and key features included a central corrugated mesh chandelier containing dried spices, vegetables and flowers, evoking a souk, and a terracotta open kitchen which turns cooking into a “performance.”

Another representative project is ‘Lost in Transition,’ a “fictional sculpture” inviting Beirut’s citizens to use constructions comprising metal seats connected by an arch. Together with stools these can be used in various configurations, from eating lunch to reading alone, and are accompanied by a film directed by Ely Dagher (nominated for an Architectural Film Award at this year’s Milano Design Film Festival). The practice also created a ‘temporary nightclub’ which can be mounted and dismantled in two hours, which was featured in another film, by Mounia Akl.

Product design is the final piece in the jigsaw that makes up this highly creative firm’s work, and provides avenues to explore new materials and ways of using them. It has seen the duo collaborating with materials firms from Murano in Venice, to stone makers in Cairo, to macramé and bejuco in Cancun.

As to the future, Tessa Sakhi gets the last word: “Our future goals will be more focused on creating sustainable structures that use innovative, recuperated and biodegradable materials.” The firm’s doing this already however, such as in its pavilion currently on show in Dubai, and is delivering the practical, diverse designs that enact its strong ethos. 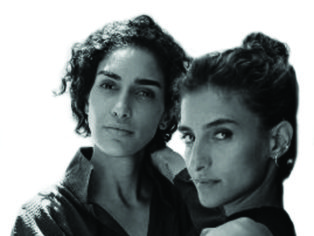