Emerging from a desire to ‘do things better’, over their 30-year lifespan Colman Architects have produced a wealth of diverse projects from sleek gallery spaces to colossal Chinese masterplans. Sébastien Reed investigates.

The project is the all-important thing – Colman Architects’ mantra for delivering projects places the achievement of transformative solutions to a client’s brief as a top priority. The practice, whose roots are firmly in commercial architecture, differentiates itself from others through its strict client-oriented approach, and steering projects away from “self-indulgent” design choices and towards the best course of action that fits a particular need.

When ADF challenges senior partner Trevor Colman on whether the level of design freedom his team enjoys is limited by such an approach, he responds: “a lot of architectural practices do as they’re told, and perhaps their customers and clients get a service that they ask for, but not necessarily what they actually want.” By contrast Colman Architects put their weight behind moving beyond straight-forward implementation of a pre-proposed solution, towards reimagining the solution altogether for the client, be it a bank, funding institution, developer or individual investor. Colman states simply: “What we’re about is getting the very best quality of design, so that the client is left feeling a sense of joy.”

The practice was born in the late 80s as three architects at McColl Architects, a go-ahead London firm at the time, saw the opportunity to develop a more comprehensive, service-focused offering, and left to found a new practice together. Nearly three decades later, Colman Architects has grown in size and contracted through peaks and troughs in demand, eventually finding a balance with 20- 35 architects distributed among two UK offices and a China-based satellite practice harbouring much of its East Asian work.

Colmans’ preoccupation with commercial projects is a direct product of its origins. With McColl being heavily involved in retail, it provided the current firm’s founding three with the expertise to broaden its horizons to office and leisure schemes like hotels, cinemas, and restaurants. However, after the resurgence of mixed-use developments in the 1990s, the practice’s portfolio has diversified yet further, encompassing everything from town-scale masterplanning to relatively modest private residences.

Leading from the top

The current team relies heavily on the influence and expertise of its directors, as Colman explains: “I’ve got two directors who’ve been with me for 28 years, that’s a long time.” Describing the practice’s working methods, he says the directors are the first port of call for any crucial design decisions, “because that’s where the experience is, and then it filters down through the practice.”

Colman Architects’ significant lifespan has allowed for considerable experimentation, the firm having established offices in Dublin, Ireland and Chengdu, China, and growing its workforce of design- ers to over 50 (before later slimming it down again). Colman also notes the double-edged sword of running a larger practice with increasingly international commitments: “The directors end up running a company rather than doing the projects.”

The Dublin office has closed and the Chinese bureau now functions largely self-sufficiently, and this has brought efficiencies. Limiting the size and breadth of the practice, says Colman, “gives the opportunity for the directors to be involved in every project, and the ability to do the biggest projects, as well as giving a lot of time to smaller projects as well.”

Colman Architects now focuses on its UK offices, of which one is based in London, and the other, newly established in Chichester, Sussex. While the practice has a large array of international projects under its belt, it is currently putting a lot of resources into a vast mixed-use scheme, a makeover of the well-known Lewis’s retail store in Liverpool into the Circus retail and leisure project. Deploying all of Colman’s commercial sector expertise, it will combine “cinemas, clubs, bars, as well as retail, linking into probably the busiest transport hub in Liverpool.”

He says the scheme is a good example of Colman Architects’ client-centred philosophy, “The developer is really keen on the way we do the service and we’re very pleased.”

‘Cost-effective’ and ‘elegant’ are the two traits claimed by the practice to encapsulate the results of their designs. These traits are perhaps best illustrated in their adaptation and refurbishment of the Grade II Listed former Tate Library into the Mascolo Space studio and gallery in Battersea, London, which plays host to a wide variety of events. The project, which features stained-glass windows and oak panelled walls, was elegantly frugal, totalling only £400,000 – its cost-effectiveness, Colman explains, coming from “producing all the right systems and squeezing them into the building.”

In terms of their approach to creating aesthetically elegant solutions particularly in a retail development context, Colman notes how slight adjustments in the presentation of main circulation spaces, tweaking lighting systems and colour schemes for instance, can “influence the way you feel about the whole environment.”

Moor House School & College in Oxted, Surrey, is an example of one of the practice’s masterplanning successes. The specialist school for children and young people with speech and language difficulties was seeking ways to increase accessibility and independence for its students, so it hosted a competition for a new sixth form college design. Instead of providing an architectural design for a new building, Colman Architects’ careful landscaping and use of spatial circulation gave rise to a completely new ‘student village’ concept.

“What they were trying to do was give students that independence within the school environment,” explains Trevor Colman, before going on to say how the design helped the spaces not look unduly different from ‘normal’ homes; “if you design this student village as a series of large houses with bedrooms and kitchens, so that they look and feel like houses or domestic properties, then the students will instantly feel at home.” He continues: “That holistic view of the whole problem meant that we could actually give them probably something they didn’t realise they wanted.”

At the other end of the spectrum, Colmans’ Chinese office is currently facing the challenge of developing the strategic master-plan for a new neighbourhood 30 miles from Chengdu, which is set to accommodate 20,000 inhabitants.

The development is intended to reference elements of traditional Chinese villages, while diverging from the overtly urban tendencies of large-scale East Asian schemes, creating a sustainable, empathic, and again, holistic solution to planned urbanisation.

The practice has embraced technological advances in a number of areas, from utilising the latest software to produce renderings for clients, to specifying glue-laminated timber for a swimming pool in Belgium. Colman is quick to add, however, that pursuing such cutting-edge technologies should be done with a healthy dose of scepticism.

On BIM, Colman posits that given the huge investments of time and effort necessary to generate models, there is still a very long way to go before it becomes a practical solution and a staple tool for Colman Architects, saying: “It feels very much like the early stages of when practices were computerising.” And on new materials, he expresses concern around “experimenting with clients’ money,” adding “we tend to not go for materials just for the sake of it, we’re always looking for the appropriate material for the situation we’re in.”

Like many UK architectural practices, Colman Architects boasts a largely international workforce – “at one point the practice collectively had the ability to speak 25 different languages!” exclaims Colman. With it having benefitted greatly from the expertise of EU nationals among its staff over the years, he does have concerns around Brexit. He wonders whether the industry will be able to meet spikes in demand in future – likely to occur due to the cyclic nature of the construction industry. Whether future demand can be satisfied by UK architects alone, without any supplementation from the EU, is unknown, he says: “The thing that concerns me is whether we’ll be able to access that resource in the future.”

Despite these ambiguities, the future continues to look bright for Colman Architects. The practice has weathered a slew of outside forces over three decades in the form of financial crises, and is still going strong. The eagerness to deliver exactly what is needed for projects, driven from the top, has gained the firm strong trust among clients and allowed it to put its best foot forward for the future. 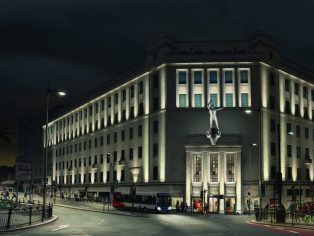