After graduating with a Bachelors and Master’s degree in architecture from Tulane University, New Orleans in 1991, founder and principal of Assembledge+ David Thompson spent his first years as a graduate focusing on furniture design. Interested in the reduced scale of design, he used the craft to continue developing his skills as a young architect until 1997, when Assembledge+ was born.

After a number of small architectural commissions, a furniture line and a short stint working in New York City, David decided to refocus. “I decided to return Assembledge+ back to my roots in Los Angeles,” he says, “to help transform the city where I grew up and that I love so dearly.”

“The name Assembledge+ was born out of the genuine belief in the art of collaboration,” says David, at “a late-night charette with a friend in which we decided that we could no longer continue until we agreed on a name for the firm.”

The budding architect saw it as vital to choose a name that communicated his enthusiasm for putting together the different sequences of design process to produce a precise and considered architectural whole – one that sits firmly on the leading edge of contemporary discourse. The additional ‘+’ symbol provides further nuance, signifying the practice’s holistic approach that strives for “better, more efficient, and innovative ways to construct modern living and working environments.”

Since its foundation, the practice has grown strategically to its current 14 staff; comprising 12 designers, a marketing and communications specialist, and office manager tasked with the smooth running of the firm’s premises, which is located on LA’s famous Sunset Boulevard.

David credits the neighbourhood and its unique buzz as a core influence for the practice: “I believe that Hollywood has embodied a pioneering spirit that is different than anywhere else in the world. I am excited to see what that spirit has in store for future generations, and I wanted my practice to be at the centre of that energy.”

On the challenges of growing, David prioritises creative interest over an uncontrolled amassing of projects: “When we discuss growth, one fundamental objective is to maintain a connection to the work and the process.” In 2011, an important appointment to the firm cemented another close connection within the practice that was much closer to home.

David’s father Richard is an award-winning architect in his own right, and was looking to leave the corporate architectural world and found a consulting practice focused on urban planning. David however suggested that he bring his expertise to the team and open an Urban Planning division at Assembledge+. “Our story is not your typical father-son partnership,” says David. Richard continues: “Most father-son architectural practices begin with the son joining the father’s practice. We did the opposite.”

Richard’s experience in urban design and planning along with David’s residential, hospitality and design portfolio meant that the scope of solutions offered by Assembledge+ was broadened. More profoundly, Richard hoped that recruiting his own flesh and blood would “enrich the dialogue and views of how architecture and planning co-exist and are mutually reinforcing.”

As the most senior member of the practice as joint principal, Richard contributes a wealth of knowledge of the architectural profession amassed over his 45 year-long career, as well as watercolour painting classes for what he calls his “young computer genius” colleagues. Nonetheless, he is mindful that Assembledge+ is his son’s creation, and he sees his role as to make David as successful as possible.

Both David and Richard are agreed that being good listeners is core to their profession and approach in practice. They are very conscious that two-way communication is key to balancing clients’ comfort with their desires, and ensuring their inclusion in the thought process and their understanding of how Assembledge+ and the mechanisms of design work.

Richard remarks how sensitive larger-scale design and urban planning can be due to projects’ complexity, and what it means for the designer: “They have the ability to affect whole communities, businesses, campuses and urban districts, and therefore come with huge responsibility, the first of which you might say would be to ‘do no harm.’” As well as emulating the Hippocratic Oath, Richard advocates giving all parties a voice in the process, listening, and “crafting strategies for meaningful dialogue towards consensus.”

This democratic approach has not resulted in any particular signature style, but more – at least across the practice’s architectural remit – certain “modernist sensibilities.” David pinpoints Californian modernism as a central theme; including close attention to indoor-outdoor living, open plans, extensive use of glass and taking full advantage of the favourable southern Californian climate.

To tease out the fruits of lateral thinking on residential projects, the architects often like to kickstart the design process not by focusing on the size of the house, but instead the size of the site. “This facilitates an approach that allows us to investigate how the living spaces can integrate with the natural surroundings, extending the users’ experience into the landscape,” says David. In short, paying careful attention to the context that a project inhabits is vital to the practice’s design approach.

No detail is too small

Both David and Richard acknowledge the importance of getting the details right, for which they rely on high quality from contractors and tradespeople. “We believe that the greatest idea can fall flat on its face if it is not executed properly,” says David. “We generally take a collaborative approach with the builders that we work with in order to have those trades that are touching and executing the details a part of the design process.”

According to Richard, the practice’s embrace of quality workmanship and craft is best exemplified across the numerous Cactus Club restaurants that they have worked on. Using warm woods, handcrafted tiles, articulated ceilings with focused lighting, audiovisual and air handling equipment together with world-class fine art, Assembledge+ has crafted environments that have become synonymous with the Cactus Club brand.

Currently, Assembledge+’s project pipeline is brimming with a broad set of design typologies; several high-end residential projects in various stages of development dotted around the US, a restaurant concept in British Columbia, Canada, a campus master plan for the University of Hawaii community college in Hilo on the Island of Hawaii, and a planning project for the University of Southern California.

The growth of their portfolio is, in part, down to the numerous awards which have brought attention to the firm, including a special mention at the Architizer awards for a temporary installation called The Lost Orchard, and an American Institute of Architects award for their residential scheme the Oakdell Residence in Studio City, LA.

Defined by its goals and challenges, Assembledge+’s future strategy will consist of implementing the right systems to take on yet more complex projects and typologies while doubling down on marketing efforts to locate new revenue sources. David concludes: “While our primary goal is to produce great architecture, it is also my goal to build a business that is achieving success in all the other facets that gauge business prosperity.” 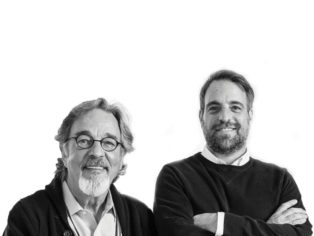 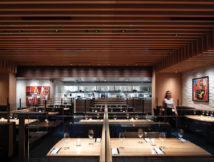 One of several restaurants for the Cactus Club chain that Assembledge+ worked on is at Station Square in Vancouver, Canada © Ema Peter 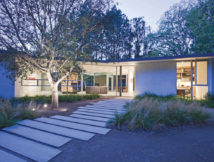 The Oakdell Residence, Studio City, Los Angeles, won Assembledge+ an award from the American Institute of Architects in 2017 © Michael Weschler