There’s something new on the menu in Liverpool city centre in the shape of a bar and restaurant that’s inspired by an iconic seaside resort for America’s wealthy elite. Jess Unwin investigates.

Anew bar and restaurant that’s inspired by the idea of a beachfront summer retreat with New England-style architectural influences is a unique new addition to Liverpool’s city centre.

The Club House, located in the city’s Chavasse Park and a part of the Liverpool ONE shopping and leisure complex, recently opened its doors to the public for the first time. Built from scratch for around £2.5 million, the 7,446sqft venue operates over two floors, including a first-floor terrace, and offers seating for 200. In addition, a landscaped outdoor area can cater for another 400 people.

Its striking design allows visitors to imagine they could be somewhere in the Hamptons – the iconic seaside resort for America’s wealthy elite in Long Island, New York. In reality, they are drinking or dining within a stone’s throw of the Albert Dock – one of Liverpool’s own famous landmarks on the Mersey river.

Their daydreams of white sandy beaches are only possible after some very real-world construction challenges had first been overcome. That’s because Chavasse Park is an elevated grassy area that actually sits atop a 2,000-space underground car park and also some of the shops along one side of nearby South John Street.

Concerns about the potential for damage to the car park, retail units and a membrane designed to protect those structures from rainwater had to be addressed before Liverpool’s planning authorities would give the go-ahead to The Club House.

“It was a sensitive construction project from the point of view of not perforating the membrane. There was also concern about the load from The Club House bearing down on the concrete-frame car park.

“So the engineers designed a huge lattice work of steel underground to ensure that the load is spread over the footprint of the building. The result is The Club House sits on that steel frame, with a concrete slab that goes on top of it, then it’s all waterproofed. That work cost around £250,000 before we even got out of the ground.”

With this vital preparation completed, work could get under way on The Club House itself – a design concept that Paul came up with in its entirety. “I wanted
to develop a building firstly that would be a strong stand-alone design statement and secondly a destination landmark for the city of Liverpool. Not just another chain roll-out!

“I thought about a building which had a connection to the close proximity of the site to the sea without designing yet another yacht club, which the UK is littered with in various shapes and styles, yet something romantic and themed with a great history and strong story line.’’

“The way I design, there always has to be a story. My idea with this was that it’s a building in the Hamptons facing a white sandy beach that perhaps used to be a boathouse, water sports club or something like that but which has been a family home for the past 30 years. The latest chapter of the story is that it’s now been bought and converted into a stylish bar and restaurant.”

Turning Paul’s vision into reality began with the steel frame:

“Unlike some other buildings, you could actually see the whole form of the house even at the steel frame stage,” he says.

Progress was rapid and continued with the installation of a Metsec wall system – lightweight steel frames with cement board panels in between.

With sections put together offsite before being lifted into position, the Metsec approach helped to keep the loading force down by avoiding the use of blockwork. Steel is again used as decking to form the first-storey floor.

“I sourced the timber from suppliers I know in Ireland. I particularly wanted old timber with paint on it. We repainted it without rubbing it down so that it looks like it has been painted many, many times over the years and been aged and weather-beaten by the sea – remember that’s part of the story of this building.”

At ground-floor level, the exterior cladding to windowsill height is textured block stonework that creates what looks like a stone plinth to the building and maintains the look of an American beach house.

Doors and windows were designed and manufactured by Liverpool-based company Charles Evans and were again inspired by Paul’s research into the Hamptons look. On the first floor, strips of new oak cladding, vertically aligned, sit between the vertically aligned reclaimed timber and the eye-catching roofing.

Divided into two curved sections, the roofing is another of the signature design elements that help The Club House conjure up images of beach and waterside buildings. It is put together using a Kalzip roof system, comprising a powder-coated aluminium. Paul says:

“We chose that because of the curvature that we needed. It’s quite a sharp curve that’s important to the Hamptons beach look. It has an organic feel and is both key to the overall design and to softening the edges too.”

Between the two main roof sections, at the centre of the building, is a structure that’s part conning tower, part watchtower at a yacht club or harbour. Paul says:

“The tower is part of the theatre of the building and adds to the mystery of its purpose – it has something of the lifeguard station about it but it also wouldn’t look out of place on a US airfield.”

Customers can’t ascend the tower and instead the space has been used to display a spectacular chandelier.

Yet another thematic feature is the first-floor terrace, which is an extension of the overall steel framework of the building. Despite the convincingly authentic look, the boards are an example of the increasingly popular Millboard decking system. This British-made self-maintaining and wood-free product is made from a polyurethane resin blend with a resilient surface coating that’s anti-slip even when wet. The terrace railing is of course adorned with several life belts.

Finally, granite paving, astroturf and small trees in Versaille tub planters set the landscaped scene for the outdoor eating area. Unusually, the main kitchen is also located outside in a stand-alone structure that is clad in whitewashed tongue and groove timber so that it fits in perfectly with the exterior ambiance.

Inside, Paul has let his imagination off the leash. The former TV set designer (he worked on Brideshead Revisited and The Adventures Of Sherlock Holmes) also created sets for pop stars Lisa Stansfield and Kid Creole in the 1980s and has travelled the world working on projects that included a Star Trek attraction for Paramount film studios in Las Vegas.

Odd artefacts and pieces of interest hang from the walls and ceilings. There’s a letter from St James’s Palace, a picture of the Titanic passenger list, a stag’s head, a stuffed crocodile and a chandelier made from champagne flutes. There is outdoor sports, hunting and fishing paraphernalia, there are beach posters painted onto the walls and also miscellaneous items meant to remind visitors this is a venue that’s supposed to feel like it was once a family home.

The Club House is owned by pub group New World Trading Company, which is also responsible for the Smugglers Cove in Liverpool’s Albert Dock and the Oast House in Manchester. Paul Danson was the project architect for both those bars.

“There was a great deal to consider approaching a project of this scale but above all we set out to really make a statement for Liverpool with the design of the building and creating a destination landmark for the city.

“After two years in the planning the wait is over and we’ve been unbelievably excited to reveal the concept. The feedback following the launch has been phenomenal, our customers have really engaged in the romance of the building and it’s a great addition to what’s already on offer in Liverpool ONE.” 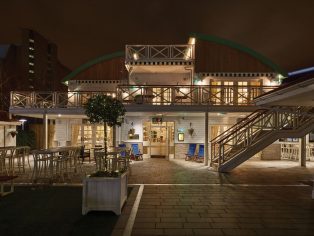 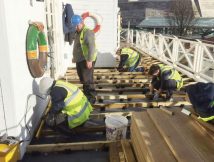 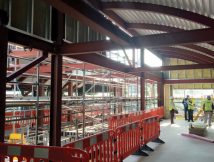 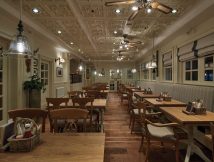 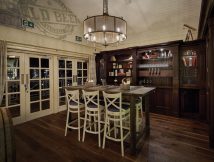 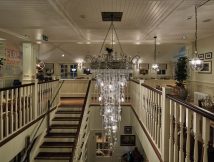 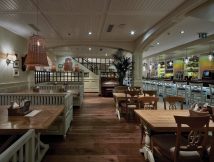 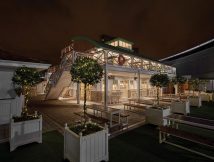