Students and staff at the Institute for Computational Cosmology, at the University of Durham, take questions about the nature of existence and reality very seriously. Their pioneering research aims to bring clarity to such rarefied subjects as how galaxies form, the identity of the first objects in the Universe, the nature of dark matter and dark energy, and the ultimate fate of the Universe.

The institute’s charismatic director, Professor Carlos Frenk, is a fellow of the Royal Society and one of the originators of Cold Dark Matter theory, which is the current standard paradigm for the formation and evolution of all galaxies and cosmic structure.

With those impressive credentials at play, it was always going to be a tough challenge to design an iconic new home for this elite cohort, in the form of the £11.5m Ogden Centre for Fundamental Physics.

“The challenge was why we were so drawn to the project to begin with. We wanted to make sure professors and students had a building
that would foster inspiration and creativity because what they do requires so much imagination and precision.”

The project even had a personal dimension, for practice founder Daniel Libeskind, whose astrophysicist son, Roam, did his PhD under Frenk in
the same department.

The three-storey building houses the Institute for Computational Cosmology, the Centre for Extragalactic Astronomy, and the Centre for Advanced Instrumentation, and was funded by the Peter Ogden Trust, a philanthropic organisation founded by Durham alumnus and businessman Peter Ogden.

It stands on the unglamorous site of a former car park south of the city centre, next to the school’s Department of Physics, in the middle of Lower Mountjoy, an area of the university established in the postwar era where its first science faculties were constructed in the 1950s.

The larch-clad facility was conceived as a series of continuous, stacked and interlock- ing forms and is instantly recognisable as the work of Libeskind, whose unflinching architectural style is characterised by angular forms, intersecting planes, and the frequent use of diagonally-sliced windows.

The Polish-American architect is the brains behind some of the most provocative and distinctive buildings in the world, including the Jewish Museum Berlin, completed in 1999, the Imperial War Museum North in Manchester, completed in 2002, and the World Trade Center Master Plan, completed in 2014.

With a gross internal area of just 2,500 m², the centre is much smaller than these cultural landmarks, which raised the stakes in terms of budget and time constraints. Swickerath comments:

“When you are designing a smaller project, trying to achieve some of the geometry can be harder and you have to be extremely conscious of the budget, programme and buildability, compared to, for example, a high rise tower where orders of magnitude are much greater.”

The brief required the inclusion of some 80 offices for professors, lecturers and doctoral students, which given the compact footprint, might have resulted in a very uniform and repetitive spatial layout.

However, the spiral plan made it possible to “break out” the programme and distrib- ute offices along the perimeter, on the ground, first and second floors, to create a variety of room shapes with different orien- tations and external views.

“We had to provide staff and students with the privacy and quiet they need to concentrate on their work, but, simultaneously, we had to make sure it didn’t feel like a sterile office building that can feel relent- less, with long corridors etc.” says Swickerath.

The spiral plan offsets floorplates on successive levels to form two voids that run through the centre of the building, covered by a massive central skylight, and a series of external balconies that step back from the facade and a roof terrace. The angled facades also helped break down the build- ing’s mass to add visual interest.

A key requirement was to engender a sense of connection and community, and the multi-story interior circulation space is configured to provide public gathering spaces where staff and students can break away and chat.

“We had to balance the opposing forces of silence and concentration, on the one hand, and community and collaboration, on the other, because so much of their work is also dependent on sharing ideas.”

Distributing the offices around the perimeter helped boost levels of natural light and ventilation, glazed doors and screens further transmit light into the interior and the central atrium.

Libeskind’s architecture has received criticism in the past for failing to respond to the local context, but here the rich historic vernacular of Durham was key inspiration. The canted curtain walls on the north and south elevations provide spectacular views of the city and Durham Cathedral, one of the finest examples of Norman architecture in Europe. Libeskind spun a Fibonacci spiral from the central tower of the Cathedral back to the site as part of efforts to root the building within the landscape.

The immediate surroundings include important 20th century buildings, including the listed Kingsgate Bridge, a concrete footbridge across the Wear gorge designed by Ove Arup, and Dunelm House, a brutal- ist student union building by Richard Raine of Architects Co-Partnership.

“We really tried to give the Ogden Centre a presence, to counter the fact it is on the site of a former car park on the road out of town, as well as to connect it to the other buildings,” says Swickerath.

The dynamic facade is clad in a ventilated timber rain screen, which is punched through on the flanks with linear bands of operable double glazed strip windows and a series of wedge-shaped outdoor terraces. The responsibly-sourced Scottish larch was supplied and installed by North Yorkshire- based Woodtech Joinery.

The timber is intended to create a warm, welcoming, non-institutional environment for professors, scientists and specialists who will spend such long periods of time inside.

The cladding will silver in colour over time, and in doing so, merge deeper into the landscape, while retaining its texture and material qualities. Other wood finishes, including oak floors, are employed in the interiors, and form part of a natural palette of exposed grey concrete columns and ceilings and frosted glass partitions.

Swickerath describes the reinforced frame as a “pretty straightforward” arrangement of slabs and columns, most of which are vertical, a few sloping.

“As a practice, we always try to balance the excitement of architectural expression with the realities of budgets and construction,” she says.

The specification of timber and concrete forms part of an ambitious environmental strategy for the centre, which is certified BREEAM ‘Excellent’ and targets net zero energy consumption.

Renewable energy is drawn from a ground-source heat pump and a rooftop photovoltaic array. The thermal mass of the exposed concrete ceilings and structural frame are harnessed to reduce heating and cooling requirements.

From the client side, the Ogden Centre project was masterminded by Professor Frenk, who from the outset took an active role in the design process. This is not a new preoccupation for the Mexican-American scientist, who persuaded the University to build the original Ogden Centre
for Fundamental Physics which opened in 2002.

“Carlos is one of the most spectacular people – every time I speak to him I get inspired about the universe we live in. As an architect you get to work with all kinds of specialists in different fields; this was a particularly inspiring group of people because they deal with the big questions.”

Frenk has compared the design of the Centre to the mathematical work carried out by space scientists who will walk its corridors, specifically the use of geometric lines and shapes, and the focus on light, including the skylight that can be used to study the cosmos. Time will tell if this inspirational work environment helps them delve even deeper into the mysteries of the Universe. 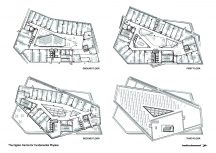 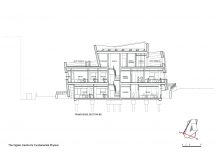