£63 million landmark building that wlll raise the bar for hospital design is being constructed in Manchester.

Innovative private hospital group Spire Healthcare has tasked architect Halliday Meecham with creating a flagship hospital, incorporating some of the most up-to-date facilities and configuration concepts.

Set for completion in 2017, the  76-bed medical facility on Princess Road in the city’s Didsbury district, will provide a large intensive therapy unit together with state-of-the art diagnostic and imaging equipment plus an outpatients unit.

Entirely new services include hydrotherapy and a hybrid 150-seat education centre on the top floor of the four-storey structure.

Quality materials and letting in light

The overarching architectural emphasis is on using quality materials, letting in as much light as possible and embedding a wayfinding approach that’s genuinely patient and visitor-friendly.

“Spire has introduced new designs in recent years but this is a big opportunity to look at all areas and create something that could be a useful benchmark going forward. It is a landmark development, their biggest new hospital for a number of years, so it’s a chance to push to another level.”

The hospital is being constructed at a location that’s not only adjoining one of Manchester’s arterial roads and served by trams but is also near junction 5 of the M60 and on the way to the city’s airport. Phil says: “It’s a prominent site and highly visible from major roads so this will be an iconic building as people come into the city.”

Unseen in any other hospital in the group is the top-floor education centre. Phil explains:

“This is something new to Spire and they’re keen on that serving not only the hospital but also the wider medical community in Manchester, like GPs or pharmaceutical companies.” Facilities will include the latest in audiovisual systems that will, for example, allow people to watch operations going on two floors below. Accessed via its own separate entrance, and a lift that bypasses the rest of the hospital, the education/conference centre will offer panoramic views over Manchester. Elsewhere, careful consideration has been given to the organisation of the hospital’s activities. Phil says: “The ground floor is designed to be the outpatients area, to serve those coming in for a consultation, physiotherapy, an MRI scan or X-ray. The first floor is the location for operating and day care, while the second floor will be home to in-patients’ bedrooms for people who stay overnight.”

Glass exteriors will be a striking feature

While the mostly concrete frame of the building (the top floor is steel) will of course be invisible, the glass exteriors will be a striking feature. Phil explains: “Glazing is one of the areas where we’re trying to do something different. We’re trying to give a lot more visibility in and out of the building and get more light into the building to create a better interior.”

A groundfloor-to-topfloor central courtyard in the middle of the building is part of that plan to bring light flooding in. It helps ensure all bedrooms have windows and most consultation rooms too. Solar shading is supplied by timber louvres, both horizontal and vertical, which, along with blinds, also help to maintain privacy.

Staying with the glass, Phil adds:

“One of the issues when designing hospitals generally is that you don’t get a regular internal grid of rooms like you would do with a hotel, student accommodation or apartments. So you need some sort of glazing scheme on the outside that incorporates both blank insulated panels and glass in what might appear from outside to be a random pattern but which suits the internal arrangements of the building.”

While the education centre-level exterior is fully glazed and boasts a balcony with a glazed balustrade, the rest of the hospital is partially covered with metallic and ceramic cladding – some of which is white to fit in with neighbouring Sir William Siemens House.

Internally, design decisions are just as important and Phil reveals there has been step-by-step input from medical staff at Spire Manchester Hospital on the layout and palette of materials and colours.

“Away from clinical areas like operating theatres, i.e. the public spaces and bedrooms, we’re trying to include high-quality materials that you would more likely see in high-end hotels than a hospital. We’re trying to incorporate natural materials like timber into the building, which is not something that happens often in hospitals.

“The design is very carefully thought out so the environment isn’t overly sterile unless it needs to be. So, for example, the new hospital will feature consulting rooms that are separate from examination rooms. Only the latter really need to feel clinical.”

“Our challenge is to get the balance right between introducing new materials and a more design-oriented hotel-style in some areas while also designing for clinical areas to take into account infection control and hygiene requirements, like using seamless materials that are easy to clean.”

Just as there has been much thought put into creating light and airy spaces inside, getting around the building has been “very carefully analysed” and worked through to make sure it meets Spire Healthcare’s requirements for patient flow, says Phil.

“We’ve been very carefully analysing wayfinding so that people don’t have to walk too far and that they always have a good idea of where they are in the building.”

The building will be fully air-conditioned – not just operating theatres and other treatment rooms but consultation rooms, inpatient bedrooms and offices as well. A sophisticated building management system will control the environment and it won’t be possible to open windows, which is a set-up that deals not only with hygiene concerns but pollution and sound from nearby roads.

Another important consideration for the design team was to deliver a building with strong sustainability credentials and a BREEAM rating target of Very Good. The envelope is designed to minimise energy usage and CO2 emissions and the scheme will feature sedum and wildflower roofs, high-performance glazing and a large number of photovoltaic panels. Any removal of trees during construction was delayed until after birds had finished nesting, and new trees will be planted as replacements as soon as construction allows.

With the project being relatively fast-paced – work started on-site in April 2015 – building information modelling (BIM) has proved very helpful for collaboration between Halliday Meecham and the project’s structural engineers and M&E consultants.

“It meant we could identify and eliminate any clashes far earlier, that is before we got on-site,” says Phil.

Spire bought the land, which comprised an overflow car park and a grassed area, from Siemens. The plot is a part of the German engineering company’s Princess Road campus, another part of which is already occupied by Sir William Siemens House. Spire Healthcare’s new hospital is the first stage in a long-term plan to develop a technology and healthcare-focused business park.

Halliday Meecham has worked with Spire Healthcare on hospital projects for more than a decade now and is currently helping to build another hospital for the company in Tollerton, south Nottingham, which also opens in 2017.

“People’s expectations of healthcare have risen. The design of hotels and shops has moved on and hospital designs need to keep up.

“What we want to do in Manchester is make sure this new hospital has a very a different kind of feel to it than other hospitals – very much a 21st century building using 21st century materials.” 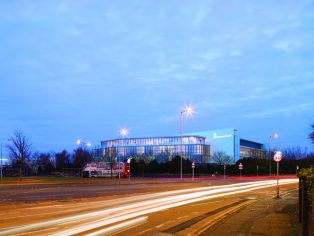