Set in a triangular mews in north London, a quirky mixed-use project offers privacy and bright spaces despite a tight urban context. Jack Wooler spoke to architects Tom Byrne and Simon Lilley to get their take on the scheme

The Old Dairy is a mixed-use scheme An organic feel located in a tight triangular parcel of land tucked away in a private mews, not far from the bustle of King’s Cross station. Its name comes from the now- demolished building it replaces – a defunct 1930s dairy.

Covering just 0.2 hectares of land, the project offered multiple challenges, from its constrained size, to site access and services, to the listed structures that enclose it which required careful treatment.

Now completed and sold, the project includes two commercial units to the west of the site, and a metal-clad terrace to the east, the latter made up of two houses and 13 apartments all arranged over three storeys.

Simon Lilley, director at executive architects Stanhope Gate and Tom Byrne, senior architectural technologist, at the firm, met ADF to discuss how the project’s discreet design tackled a dense context, and how both ends of the Design & Build contract were hampered by that context.

Referencing the original dairy building’s peaked roofscape, the homes required careful design consideration to ensure they fitted harmoniously into these complex as well as compact surroundings.

The building’s distinctive envelope displays folded triangular extrusions of interlocking panels intended to reflect the site’s industrial heritage, as well as blend with its leafy context. Making as much use of the tight footprint as possible, the homes offer generous floor to ceiling heights, especially in the lower ground floors, and a range of garden spaces and inset roof terraces. They are punctuated by long windows, resulting from “a highly considered daylighting strategy.”

Inside, the interiors – designed by architects 1508 London – continue the stripped back, industrial feel of the building’s exterior. The homes offer a light timber palette with wooden floors throughout and exposed concrete staircases in each of the two townhouses, as well as high levels of discreet glazing – to introduce plenty of light while crucially keeping onlookers’ gazes out.

The design of this project was initially headed up by another practice, S333, who provided the initial concept and took it through to an approved planning application – originally for two commercial units and five houses. Stanhope Gate were appointed later to revise the project, “changing it within the spirit of what had already been designed,” explains Simon, “but elevating it.”

He tells me that the main design concept remained the same – to retain the character of the site’s former dairy. The Stanhope team however rearranged the plan and achieved new planning permission to increase the site’s density, as well as privacy.

To retain a link to the former building’s character, the practice wanted to introduce an “organic feel,” to the design, which is most evident in the “faceted form of the plan,” says Simon. “It really responds to its context, which is very green,” he says. “The vertical nature of the tree trunks for example was an inspiration in the design process, and part of the idea behind the vertical folds in the cladding.”

Metal envelope
While the previous application did include metal cladding, the scheme’s envelope was originally specified to be bronze. Simon tells ADF that the Stanhope team instead opted for a Pigmento Brown zinc from VMZinc, in preference to bronze for both budgetary reasons, and because “with bronze you get a transitional period in the weathering process where it doesn’t look great.”

The architects looked at polyester powder coated aluminium too, “which would have been cheaper,” he explains, “but it felt a little too industrial.” They decided in the end that the zinc material chosen “had more depth” to the surface, “particularly when you see the light falling on it – it’s a little more lively.”

Though successful and visually impressive, the architects tell me that there were many challenges in the creation of this envelope, including trying to achieve the concept in reality.

“If we had a joint in the wrong place,” Simon says, “if the wrong type of joint was used between panels, or if there had been a profusion of heavy rivets to hold it all together, it would have killed the purity of the concept.”

Tom tells me that to address these concerns, the architects engaged with the cladding manufacturer VMZinc before they went into the revised planning process to ensure it could be built as designed: “They put a specification together before we went to the contractor for pricing – they even recommended a thicker gauge of metal to prevent a waning effect – it’s a lesson we’ve learned before; it’s crucial to work closely with manufacturers.”

Simon adds: “The devil’s in the detail, It can make or break a project.”

Context
Besides just the cladding, great thought was given to the project’s context, with the architects and planners focused on balancing residents’ needs with avoiding too much building volume.

When amending the plans, Simon tells me that gaining the biggest size and presence possible for the building on the site drove the concept in the client’s mind, but there were many challenges to achieve that in such a small footprint in a busy part of the city.

“We had to have a buffer to prevent overlooking, while being careful to avoid overdevelopment, which is often a problem in central London,” Simon explains.

It was imperative to planners, the practice, and potential buyers alike that the design ensured privacy for residents. As such, the building was set back from the perimeter of the original building, to prevent overlooking from or to the gardens or the adjacent terrace. Much of the glazing was specified as tall but modestly scaled apertures – which just punctuate the facade – so that residents and outsiders are always at an acute angle of each other (especially towards the park), and along the northern boundary the original dairy building’s gable wall was retained to ensure that all views from that side were protected.

Gaining this balance reportedly took several months to achieve, including lots of back and forth between the project team and Camden Council’s design office.

Daylighting
Of course, with such a strong emphasis on designing for privacy, consideration had to be paid to ensuring daylighting wasn’t compromised. Utilising Velfac glazing systems, the architects aimed to introduce as much natural light as possible without hampering the privacy aspects the design had achieved.

On the lower ground floor especially, Simon explains, “the idea was to maximise the amount of glazing we could get.” The interior architects specified white walls, enhancing the available light levels to the maximum.

To mitigate the extensive glazing here, the original scheme had a system of adjustable louvres, but Simon tells me that Stanhope believed this to be “a bit fussy and prone to failure.” Instead, the practice specified simpler screens, as well as the angling of the glazing, which combined reportedly aid the sightline issues “significantly.”

To further increase the natural light available where it was needed, skylights were specified. “Had we not introduced these,” Simon explains, “I think it would have been a bit on the gloomy side in places.”

He summarises: “Each level and home responds to different requirements, ensuring that no one’s missed out.”

“In the beginning, we discussed various methods and materials for the structures themselves,” he continues, “we considered precast planks at one point, for example, but getting them in was going to be difficult, and we also looked at not using as much concrete, but the extra time it would take didn’t match the client’s aspirations.”

After talking to the multiple contractors involved and deciding on the best route forwards together, the finished homes were formed with a reinforced concrete frame from the basement up to first floor level, with a steel frame over to form the pitched roof.

One structural challenge presented in this construction process was the retention of the existing north and west walls, for which the team undertook reinforced concrete underpinning. Alongside this, contiguous piling close to the south and east boundary was necessary to allow the basement works to progress with minimum disruption to the adjoining structures, which were being monitored throughout for any movement.

Simon tells me the conserved wall on the park’s side caused further issues throughout the project. There was a lot of planting, weeds and trees that had seeded between the wall and the two skins, so the team had to peel this away to expose what was left, as well as remove damaged bricks, and replace it with lime mortar and reclaimed bricks. In addition there was the challenge of conserving the wall as best as they could while minimising the cost of the process for the developer.

Energy use
Another challenge in the implementation of the project’s design was integrating services, given the highly constrained nature of the site. Tom explains: “Placing the services was difficult – pushing the rainwater tanks back without doing much deep excavation (specified in the planning process) meant that we didn’t have space for a transformer, and we had to go back and forwards a few times to ensure that we wouldn’t need one.”

The architect says the team’s design was right on the threshold of regulations in terms of requiring a transformer, and as such had to retrospectively design an energy strategy to stay within the parameters. Where the original scheme utilised ground source heat pumps, the architects instead had to substitute a system with a lower electrical demand, which ended up being a communal gas air absorption heat pump.

Despite this perhaps slightly less ecological specification, the team hit Code Level 4 for the homes, and received a high BREEAM score of Very Good for the commercial units. The latter however was not final, as the team only constructed an “insulated shell,” and this necessarily changed during fit out.

Enabling them to reach this target were various sustainable methods, including high U-values in the walls, high levels of airtightness with insulation tape and seals to the windows, and low water usage fittings in the bathrooms and kitchens.

Success
Looking back, the architects both view the project as a “huge success,” especially in the face of its many challenges.

According to Tom and Simon, however, it was all worth it, and the client was reportedly very pleased with the results.

“The fact is that their units have sold, so they were obviously happy, but even far before that, the planners and the potential residents were hugely supportive of the scheme and the spaces we wanted to create,” says Tom.

“It definitely stretched us,” Simon adds, “but the result says it all.” 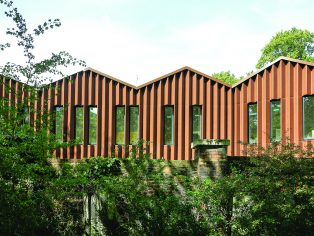 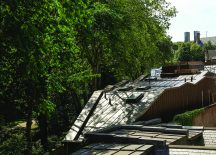