As patrons swim, climb, play bowls, or use exercise bikes at the new Wycombe Leisure Centre, they will perhaps give little thought to how a complex masterplan and financing arrangement lie behind the construction – achieved even in these hard times – of a new replacement for its obsolete predecessor.

Leisure centres can present a problem for architects – how does one make a distinctive design out of something which, when all is said and done, is an extremely large box in which sports and fitness activities are carried out?

When Mike Lee was asked to design Wycombe District Council’s new £25 million leisure he had to create something that would not be visually intrusive despite its site on top of a hill – and next to open country on one side – and which would fit in with as yet unconstructed buildings planned on adjacent sites.

The leisure centre is part of the Handy Cross Hub development complex, masterplanned by architect Richard Markland, which will eventually also comprise a hotel, 300,000 square feet of offices, a park and ride terminus, a Waitrose food store and a mid-rise multi-storey car park.

Handy Cross is about one and a half miles from the centre of High Wycombe close to the junction of the A404 with the M40.

It had housed an older leisure centre along with playing fields and an athletics track.

Lee, a partner in S+P Architects, recalls the first step was to relocate these facilities to nearby sites and then design the new leisure centre so that the adjacent old one could remain operational during its construction phase.

S+P was appointed as architect and lead designer for the leisure centre and car park from inception to the appointment of a design and build contractor through the IESE framework. The firm then provided design services to and worked with contractor Willmott Dixon until completion.

This accommodation mix and brief was agreed after consultation, through the council, with user groups, sports governing bodies and potential operators.

The building uses a steel frame with concrete floors and a flat steel roof. Concrete tanks were used in the swimming pool, while the ground floor is a ground bearing concrete slab and the upper floors are suspended concrete slabs, some of which are precast.

To avoid visual intrusion the centre is clad mainly in aluminium but with a striking green copper cladding used to denote the entrance.

“It is clad in copper cladding at main entrance and aluminium on bulk of building after we went through options for appearance of building with Wycombe council, as its right at top of hill in a residential area.

“The cladding is used to soften its appearance, and on the other side there is the M40 and open country beyond that, so the cladding reduces the visual impact there too.”

“There were requirements over the centre’s visual impact as we are in an area that is containing 71 per cent area of outstanding natural beauty, so it could not be intrusive and the cladding chosen was something that would not catch the light too much as its on top of a hill.”

As to the internal layout, Lee explains:

“The pool hall, cafe and fitness suite are positioned to the front of the building overlooking the boulevard, which links the main building elements of the hub development’s first phase.

“This allows an active frontage and visual draw. Much of the interior is visible from outside so potential patrons can see what is going on and at night the centre glows out at you.” The sports hall has been kept to the rear to limited visual impact.

Leisure centres need specialist electrical equipment, which was provided by REL Electrical on a £2.2 million contract which included works to the 2,300 m2 Waitrose store and the car park.

“One of the biggest challenges was the lighting. Due to the nature of the pool, which will be used for competitions as well as general leisure use, two different levels of lighting were required. This demanded a very detailed design, which would meet the requirements set by Sport England, so we carried out computer-aided light simulation modelling to achieve this.

“The design had to result in a high level of lighting for competitions and ensure minimal glare on the pool surface.”

The adjacent car park provides 323 spaces over five staggered levels, with green walls and hedges as screening to the external walls and public transport to the town centres is available through the park and ride service.

Modern leisure centres are facilities that most councils wish to offer since they are popular with voters, help to attract visitors and assist in delivering objectives for improved public health and fitness.

Designing and constructing them thus has the beneficial knock-on effect – usually later in life – of keeping people out of the costly health and social care systems.

They are though not cheap, and Wycombe had to devise a package the get this project financed.

“the old leisure centre was 40 years old and tired and dated with an inadequate gym.

“We wanted to replace it and needed a package that would pay for it. It has been self-financing from the site.”

The other developments built and planned for the 17 acre site have enabled the council to pay for the leisure centre – it developed and leased the Waitrose store for example.

Lee recalls the council was

“very keen on renewable energy sources as part of development, and wanted to have a district heating system for whole development to eventually include the offices and a hotel and so wanted the infrastructure in place now.

“The swimming pool has a combined heat and power plant as it’s a big energy consumer.

“The council had a strong desire to promote the use of low and zero carbon technologies within the district.”

A biomass boiler is incorporated in the car park to serve the leisure centre providing on-site renewable energy.

All major areas except the swimming pool are naturally ventilated and the whole venue can be naturally lit, which Lee notes is unusual for a sports hall, or it can be blinded for competition events.

“We started doing BREEAM but attaining it was not a planning condition and gradually the processes for it were not used as we were trying to meet aspirations of council, not BREEAM,” Lee says.

Although the centre opened to users in January its formal opening was on 2 March by HRH the Duke of Kent, who had opened the original centre in 1978.

The council says the new centre has proven its worth in its first few months with junior and adult swimming usage having increased by 58 per cent and 74 per cent respectively compared with the same period in 2015. Squash court bookings have risen by 29 per cent.

Lee reflects that he has designed many leisure centres and “they are large boxes, that is the nature of these buildings”, with the architect having to fit in all that the client requires and design something both visually appealing and unobtrusive.

His other work has included the Swiss Cottage leisure centre in north west London, technical support to the late Dame Zaha Hadid on the Aquatics Centre at the London 2012 Olympic and Paralympic Games, and his firm is about the start work on a leisure centre at Ely for East Cambridgeshire District Council. 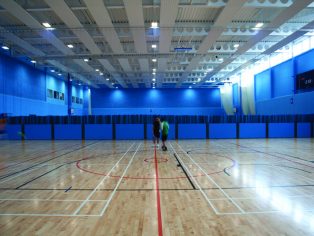 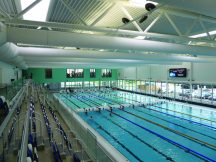