Improving the patient experience is one of the primary objectives of the architects behind Scotland’s newest, hi-tech cancer treatment centre but, as Ray Philpott reveals, taking an unconventional design approach pays dividends

From an architectural perspective, designing a radiotherapy-based cancer treatment centre is an inherently challenging task.

On one hand, you have multi-million pound, hi-tech linear accelerators – used for the radiotherapy treatment – housed in radiation-proof bunkers made from thousands of tonnes of in-situ concrete.

And on the other, in the same building, you have to create a calming and aesthetically pleasant environment that reassures and meets the practical needs of potentially highly anxious patients.

Marrying these two apparently conflicting, essential elements in a single building certainly exercised minds at Keppie Design when the practice was invited to design the state-of-the-art Lanarkshire Beatson Satellite Radiotherapy Centre in the West of Scotland.

The task was made even harder thanks to an enclosed site that is framed by existing hospital buildings on two sides and the key accident and emergency route and a service roads on the other two, none of which could be moved.

Keppie’s solution was to create an ‘inward-looking’ two-storey building with a carefully designed reception and waiting area overlooking an attractive garden ‘oasis’ at its heart – primarily with the aim of putting patients at ease before they enter the radiotherapy area or other clinical facilities.

Lanarkshire Beatson came about to meet growing demands for radiotherapy in the South and West of Scotland and to provide extra capacity for the world-class Beatson West of Scotland Cancer Centre in Glasgow – one of the busiest in Europe.

Built on a vacant site on Monklands District General Hospital in Airdrie, the new £22 million facility for NHS Lanarkshire and NHS Greater Glasgow and Clyde is funded by the Scottish Government Health and Social Care Directorate through the Frameworks Scotland 1 procurement initiative.

As a satellite of the Glasgow centre it also directly serves the local population in Lanarkshire and will enable around 80 patient treatments to be carried out daily for people requiring radiotherapy for lung, breast, prostate and colorectal tumours.

The building is equipped with the same advanced state-of-the-art technology as Glasgow, hosting two linear accelerators and a CT scanner and simulator facility, plus a radiotherapy mould-making room and on-treatment review clinics. Oncology, radiography and outpatient nursing services, among others, are provided on site.

Broadly speaking the building’s superstructure incorporates pre-cast concrete columns, floor slabs and shear walls. The exterior elevations are aluminium clad on the first floor and brick-slip clad in the lower areas with the cladding fixed to aluminium carrier rails.

However the interior structure and design of the technological ‘business end’ of the building is of an altogether different magnitude.

Here, there are three massive concrete radiation-proof bunkers, two to hold the linear accelerators and a ‘decanting bunker’ to enable repairs or a future replacement to be carried out seamlessly.

This concrete is poured and set on site with no pre-manufactured panels involved with the bunkers built first and the accelerators assembled inside.

Each bunker is connected to the main reception area via a winding ‘maze’ corridor with specially designed bends and geometries precisely calculated to prevent radiation ‘scatter’ reaching outside and also to allow a scanner to be transported through them.

Situated at the start of each maze, which have their entrance doors in the main reception, is a radiotherapy control room and a security stationwhere light gates are positioned to prevent people entering the maze when the machinery is in operation.

“To ensure our radiation-protection designs and calculations are faultless, we consulted with a Radiation Protection Advisor.

“The bunkers are designed to accept any model of accelerator as equipment selection had not been finalised when we began the process, which has the advantage of offering flexibility for future replacement choices.

“We worked closely with the main contractor, Laing O’Rourke, on the installation and development of the bunkers. They have industry-leading expertise in this area and we built on experience we’d already gained from working together on a similar project at Aberdeen Royal Infirmary.”

The bunkers are internally clad with laminate panelling to carry the services, positioning lasers and many storage cupboards to hold essential medical equipment and supplies.

Services run through the ceilings of the mazes, with a few direct connections between the bunkers and the control rooms.

In contrast to the accelerator bunkers, the CT Scanner room simply uses lead-lined plasterboard and lead-lined doors to contain any radiation.

“Where possible, we incorporated pre-fabrication and off-site manufacturing – an area in which Laing O’Rourke excels – into the design and construction process to speed delivery and address restricted site access.”

In contrast to the accelerator bunkers, the CT Scanner room simply uses a conventional lead-lined door and lead-lined plasterboard to prevent radiation leakage.

The building was awarded a BREEAM Good rating at design stage. To lower its carbon footprint it features photovoltaic cells, LED and low-energy lighting, solar-control glass on the curtain walls and rooflights, a heat recovery system in the extraction system, and where possible, natural ventilation.

“Beyond meeting the very specific technical needs of the radiotherapy and CT services, our design strategy has always been about the patients and putting them at ease,” explains Keppie’s Project Architect David Morrison.

“However, creating the best possible environment for them and delivering the client’s vision for the new centre as a bright, pleasant, patient-focused facility has been quite challenging, given the restricted site location and the inherent characteristics of the radiotherapy bunkers.

“With no particularly attractive view outwards, it was not considered worth setting the edges of the building back but, equally, we didn’t want patients just looking out onto car parks, perimeter footpaths and fencing.

“Therefore, it made sense to push the building perimeter to the edges of the site and have the patient and public areas focused inwards around an attractive, peaceful, central open space created for people to enjoy.”

A central two-storey atrium space contains the entrance, reception and main public and patient waiting area, giving quick and easy access to all patient facilities and entrances to the radiotherapy mazes.

“Everything radiates out from this area and at the same time it provides a visual and physical connection to the L-shaped and pleasantly landscaped garden – thanks to the provision of substantial levels of glazing,” says David. “It’s lit from above by roof lights, and we also ensured no corridors are dead-end and all of them benefit from natural daylight.”

On two sides of the garden a series of striking, brightly coloured vertical steel sections rise from the ground to form what is effectively a perimeter fence – albeit one you can see through – closing a gap in the perimeter of the c-shaped building.

“This feature sits on the former construction site entrance,” explains Morrison. “We constructed the building from the garden area outwards due to limited site space, storage and access, with materials delivered on a just-in-time basis.”

Patient activity is concentrated on the ground floor, ensuring step-free accessibility for those with mobility needs. Staff accommodation is located on the first floor with good vertical links making it easy to reach all treatment areas and there’s also a link to the existing hospital.

Morrison adds: “In the central area timber paneling softens the walls and also underside the main staircase to the first floor, and we’ve used porcelein floor tiling. The high ceiling and clear glass balustrades on the staircase add to the feeling of spaciousness.

“When people walk in we’ve tried to make it feel more like the relaxed lobby of a hotel or high-quality office building and make people feel they are part of something bigger.

“The furniture used is an important element of that. For example we’ve avoided traditional vinyl-backed chairs and used colourful, cafe style seats and coffee tables to enhance the overall feel and appearance of the waiting areas.”

As part of the NHS art-strategy paintings by Glasgow-based colourist artist Archie Forrest have been scanned and printed onto laminate panels displayed around the building. His images, based on Scottish landscape imagery and open foliage, complement Keppie Design’s subtle colour palette, itself referencing Scotland’s natural environment.

Forrest’s images are used in the maze corridors to make the walk to the radiation therapy areas more pleasant. They also appear in the sub-waiting areas, the link corridor, on doors throughout the building and at the reception desk.

Even the utilitarian radiotherapy bunkers benefit from a nice design touch. On the ceiling, immediately above where patients lie during radiotherapy, are calming, back-lit panels featuring blue sky and clouds.

“Very sick people come to this facility hoping to get better. We hope that, in some small way, through thoughtful design, we’re contributing to their healing process.” 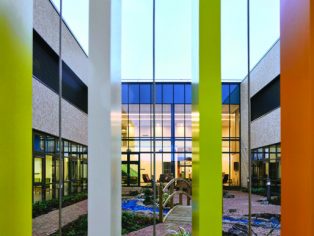 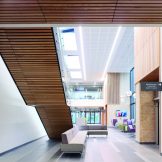 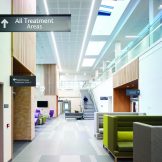 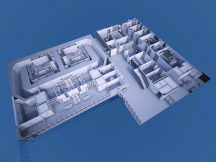 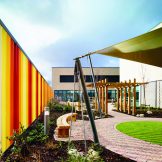