The creation of an important new aerospace research facility at Prestwick in Scotland has included the largest installation to date of the innovative new AluPlusSolar system developed by Kalzip®, with the photovoltaics being integrated into the manufacturer’s standing seam roof by one of its longest established Teamkal contractors.

The 8,000 m2 building was designed by Glasgow-based Hypostyle Architects with Balfour Beatty appointed as main contractor. Fowler McKenzie, which operates across the whole of Scotland from its premises in Aberdeen, is the roofing and cladding specialist which undertook the entire envelope package and was responsible for putting Kalzip AluPlusSolar forward to the project team.

AluPlusSolar is a versatile and highly energy efficient lightweight system that has been developed in conjunction with BIPVco who supplied the panels for bonding onto the Kalzip® 65/400 roof sheets. The latter were rolled to length on site for Fowler McKenzie’s teams to install directly across the full span of the barrel-vaulted structure. Crucially, the super thin PV laminate and connected equipment add just 3 Kg/m2 to the weight of the roof: a total saving of 8.5 tonnes across the development compared to standard systems – while providing a potential peak capacity of 126 kWp.

“Going back almost 20 years, we are the longest established member of Teamkal in Scotland and have been installing Kalzip® systems from well before that. This, however, was our first experience of installing the new Kalzip AluPlusSolar, and our first contract for Balfour Beatty in the Central Belt, as opposed to our work for them around Aberdeen.

“When we tendered for the contract, with Kalzip® 65/400 already specified, it was envisaged to install conventional PV panels over the top, but we suggested the use of Kalzip®  AluPlusSolar as an alternative which we were aware would offer time and cost savings.  It consequently delivered an 8.5 tonne weight saving across the whole building.”

The Kalzip AluPlusSolar profile can be produced in the full range of RAL colours as well as a variety of forms, including concave and convex to suit a wide variety of roof structures. Also being integrated and low in weight, they therefore offer architects and engineers greater flexibility compared to conventional PV arrays while delivering similar power output. With very low future maintenance implications, this all results in a far lower whole-life cost for a development.

The Commercial Director of BIPVco, Justin Canning explained: “Our laminates are very light and only a few millimetres thick, making them fully flexible; With conventional solar panels that are installed on a frame above the roof covering, there is the potential for wind load to cause damage – our panel is bonded direct to the roof so there are no gaps between the roof and the solar panel.”

Looking to the future, Justin added:

“I’m very excited about our partnership with Kalzip® and very happy to have this significant project completed. This is a truly innovative approach to putting photovoltaics onto a commercial roof and is testament to the on-going collaboration between Kalzip® and BIPVco – the 2021 pipeline is looking very strong and we are working on projects around the globe.

“Architects love the fact there is no effect on the roof’s aesthetic, and there is far less maintenance during the life of the roof: the module is self-cleaning due to an outer layer of ETFE and this means we need far less access equipment for maintenance.  We foresee many more jobs on industrial buildings, sports stadia and other structures including residential and modular.”

The Associate at Hypostyle Architects dealing with the project, Steven Colvin, confirmed the positive implications for designers and other specifiers. He said: “The contrast between AluPlusSolar and other PV systems is vividly illustrated by the adjoining building at Prestwick, which we also designed with a Kalzip® roof that has the PV mounted on triangular assemblies – because of the roof angle – plus all the associated access walkways.

“Instead the bonded solution is streamlined to the roof so that you don’t really see it from the ground, and it allows you to just read the building form; while the client was very keen on the greatly reduced maintenance implications. Kalzip AluPlusSolar even rules out problems such as birds nesting under panels, and there are no shadows cast by them being lifted up – which can reduce the efficiency.”

“The Kalzip® solution has taken a considerable loading off the roof and reduces maintenance as we are only installing one product in lieu of a traditional PV panel and a walkway product. Aesthetically it also provides a better finish to the build. It also reduces the number of trades on the roof, which assists health and safety and reduces the likelihood of damage to the finished Kalzip sheet.

“The incorporation of this product into the design at a concept stage will allow further potential benefits to be realised. If incorporated early enough, it could reduce the structural steel section sizes and roof purlin section sizes and centres, which would reduce material costs and install time. This should be a focus for future projects.

“Balfour Beatty have a long history of works at Prestwick dating back to the 80’s, with more recent projects which I was involved with including the Bristow Helicopter Search and Rescue Hangar, also including a Kalzip®  roof and cladding. Aesthetically the AIC building with the Kalzip® roof and AluPlusSolar is the most impressive.

A final perspective on the practicalities of the system was offered by Fowler McKenzie’s specialist sub-contractor which bonded the PV laminates onto the Kalzip® profiles. The MD of Gribben Solar, Paul Gribben, concluded:

“The installation of the PV laminates was seamless in terms of both bonding it to the Kalzip® sheets on site and the visual effect once installed. With no heavy ballast, complicated bracketry, framing or roof penetrations it was much quicker to install compared to conventional PV systems on the market.

“This was crucial given the climate while installing it so close to the sea on the west coast of Scotland, in the middle of winter.  In the last 10 years I’ve overseen the installation of over 35MW of solar photovoltaic systems, across hundreds of commercial/industrial rooftops here in the UK and the Kalzip® AluPlusSolar system stands out as my most favoured system to date: because it’s so lightweight, versatile in terms of output and so quick to install.” 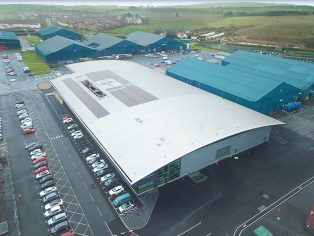