DLA Architecture, a top 100 UK architectural practice, has promoted Mark Redfern as Head of Design across all three studios in Leeds, Manchester, and London. The newly created role has been generated by the business restructure and succession plan announced earlier this year.

Mark, who joined the practice in 2006, operates across all office locations and drives the design ethos within the practice. As Head of Design, Mark will take the lead in developing a more integrated design culture to deliver the company’s ethos of contextual narrative-led architecture across all the DLA studios.

Mark has contributed considerable design leadership through several high-profile projects including the redevelopment of ‘The Majestic’ which is to become the new HQ for Channel 4, and the Central Square development in Leeds which was one of the first BREEAM Outstanding speculative office developments in the UK.  He is also currently leading the master planning for Lisbon Square, a critical gateway site in Leeds’s West End.

Chris Levett, Board Director and Head of the London office at DLA, said:

“Mark’s skills and experience are perfect for this new and vital role demonstrated by Mark’s passion for contextual and integrated design which is widely recognised in the property sector. He is able to balance the commercial requirements of the client’s brief with the challenges that each site brings to create high quality, award winning civic architecture.”

“I am delighted to take on this new role at DLA and see tremendous value in embracing the collective design expertise across all our offices to enrich our design culture. This is a very exciting time for the future of the practice and indeed the property industry as we emerge, post pandemic, with an evolved perspective on the effects of the built environment around us.”

DLA Architecture has been established for more than 40 years with offices in Leeds, Manchester and London. The award-winning practice employs over 75 architects, landscape architects, architectural technologists, and graphic designers.

In January DLA announced its succession strategy with a rebrand and has streamlined its core architectural services to focus on core growth sectors. Whilst its HQ remains in Leeds, it has committed to grow its North West presence with larger premises in Manchester city centre.

DLA is recognised nationally for its award-winning work which includes the sensitive, £21 million PPP delivered community project at Hackney Gardens in London and the transformation of the iconic Majestic building in Leeds city centre. Its expertise covers a broad range of sector including learning, sport, industry, care, workplace, housing, retail, conservation and re-use. 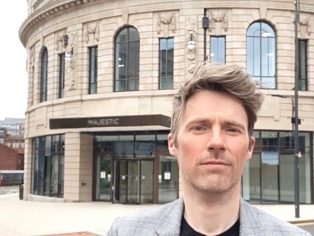