The Torre Agbar was built by the Grupo Agbar and houses its headquarters. Since water is the focus of the Augas de Barcelona, the tower represents a water fountain that constantly changes its appearance. Depending on the incidence of light, the tower changes its colours – the coloured aluminium sheeting that reflects the light consists of 40 different colours of high gloss. In front of this layer the wall is clad with thousands of glass louvres that serve as a sunscreen and can be inclined at various angles to guarantee a maximum reflection of solar energy. The space between the façade layers allows a natural circulation of air in the building.

The Torre Agbar was designed by the French architect Jean Nouvel in association with the company b720 Arquitectos from Barcelona. It is said that Nouvel was inspired by the organic forms of Gaudí’s buildings in Barcelona and by the hills of the Montserrat. The building is often compared to a geyser reaching the sky above Barcelona. 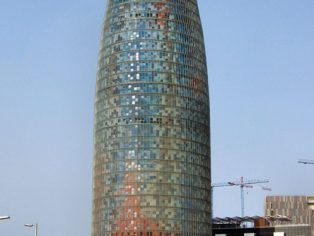