Emerging architecture practice Projects Office have been revealed as the winners of the Arch 42 Gateways competition, organised by the London Festival of Architecture and Wandsworth Council. Their winning co-design project, ‘Tunnel Visions’ aims to bring the diverse and growing local community together through a new connection for Nine Elms, turning Arch 42 into a bold local landmark.

Open to all architects, landscape architects, designers and artists, the competition sought imaginative design ideas for this historic railway arch – which is part of the Victorian railway viaduct carrying the South Western main line into Waterloo station – transforming it into a welcoming new public route that can connect visitors and locals to the new Northern Line Extension, New Covent Garden Market, the US Embassy and the River Thames.

Founded by Megan Charnley, James Christian and Bethan Kay in 2015, Projects Office delight in projects which involve and celebrate communities, at work, at play or in the city. Building on this, their joyful proposal seeks to empower residents with a sense of ownership and forge connections between people and local places to eliminate loneliness.

With a nod to Nine Elms’ railway heritage, ‘Tunnel Visions’ will see Projects Office work with school children, residents and traders to reimagine traditional railway station ‘daggerboards’. Online sessions, and later in-person workshops, where possible, will enable participants to create their own repeat patterns using simple paper-cutting techniques, which will be applied to intricately cut timber façades as a new design language, tying together a number of different interventions.

Proposals include a dramatic funnel archway highlighting the tunnel’s southern entrance with integrated seating and lighting, a decorative arch to the north, a ‘community totem’ which glows at night and plentiful planting. Creating a visual connection between Arch 42 and the new Tube stations, the bold design elements will orientate and direct visitors through the tunnel while also supporting active travel by foot or bike.

‘Tunnel Visions’ is designed as a flexible kit of parts that can be used to create other elements, added to or relocated elsewhere in future as needs and contexts change. The design proposes to use sustainably sourced timber and will be built to last – the components are optimised with standard size materials to minimise waste and can also be recycled at the end of their design life.

The ‘Tunnel Visions’ design was judged to demonstrate the best balance between innovation and artistic merit as well as showing deliverability and robustness for long term maintenance, themes that emerged from public feedback.

Panel member David Bickle, Partner at Hawkins\Brown said: “Projects Office’s winning proposal for Arch 42 effortlessly answered the brief and responded deftly to the complicated and challenging nature of the site. Both poetic and pragmatic it is a fitting theatrical response for a place that is experiencing dynamic and turbulent change.”

Projects Office will now work with stakeholders, and the local community to build upon and develop their initial design vision further, with a view to delivering the project ahead of the scheduled opening of the Northern Line Extension in Autumn 2021. The new link is part of Wandsworth Council’s package of infrastructure investment to support the population growth in the area. Funded by developer contributions, new infrastructure includes the Northern Line Extension, a Thames riverboat pier, Nine Elms Lane improvements, a new school, health centres and community and leisure facilities.

“We are delighted to have been selected as winners for this unusual and exciting competition. With the mainline railway bisecting Nine Elms, the Arch 42 underpass acts as an important threshold between the regeneration area, New Covent Garden Market and the established communities of the residential areas to the south. We look forward to developing bold new structures in collaboration with Wandsworth Council and the communiuties of Nine Elms to connect these very distinct parts of London.”

“Tunnel Visions’ is a worthy winner – a witty and inclusive response to our competition brief, connecting contemporary design, heritage, and local people. It demonstrates how an everyday route can become a memorable landmark thanks to a simple concept, imaginative use of materials and a design that draws upon the character of its surroundings. I’m looking forward to following the design development with input from local people, and to seeing it in place later this year.” 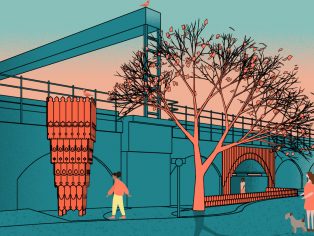