UNStudio has recently opened a new satellite office in Frankfurt, and will soon open two more, in Dubai and Melbourne.

Alongside its offices in Amsterdam, Hong Kong and Shanghai, UNStudio has recently expanded its local presence around the globe with a new regional satellite office in Frankfurt and two more to follow, in Dubai and Melbourne.

With each office covering a span of four to five flight hours, the offices in Amsterdam and Frankfurt cover the whole of Europe, with the Frankfurt office placing a special focus on the German-speaking countries. The new office in Dubai will cover the Middle-East, Northern African countries, the Caucasus and Central Asia. The offices in Shanghai and Hong Kong will continue to service mainland China and Southeast-Asia, while the new Melbourne office will focus on projects throughout Australia.

“Over the last 30 years we have carried out projects around the globe, but from now on, we will also be present on the ground across multiple time zones.”

“While the world is in a state of flux due to the Corona virus pandemic, we are preparing to navigate through this crisis and into the future. The direction UNStudio has taken in recent years has been one of growth and of the exploration of new and developing markets. We are constantly pushing the boundaries of what our profession and our practice can accomplish in the years ahead. Now we are literally crossing borders and becoming a ‘glocal’ company.”

Locally tailored services
Local offices enable UNStudio to better serve different markets, to strengthen our relationships with our clients and local partners and to keep the lines of communication short and efficient. This means that we are now in a better position and on hand to apply our in-house expertise to the entire process, from concept and design to execution and supervision. While Amsterdam remains the head office, all the offices in our practice work in close collaboration and support one another.

Our projects in Frankfurt, Dubai and Melbourne
The satellite offices have evolved in recent years from several large scale projects that UNStudio is currently designing, building and supervising in the regions mentioned. In Frankfurt we are currently supervising the construction of FOUR in collaboration with HPP. FOUR is a large scale mixed-use development we designed in the centre of Frankfurt. It includes four high-rise towers, the tallest of which reaches a height of 228 metres.

Meanwhile in Dubai, the construction of the wasl Tower is going full steam ahead and will soon reach its highest point of 302 metres. This super-high-rise structure, in a pivotal Dubai location in the vicinity of the city‘s emblematic the Burj Khalifa, will have one of the world’s tallest ceramic facades.

In Melbourne UNStudio is working with Cox Architecture on the development of Southbank by Beulah, a new mixed-use destination in the Southbank area of the city. Southbank by Beulah houses a variety of cultural, entertainment, leisure and commercial programmes, including  retail, offices, residential, hotel and exhibition spaces. 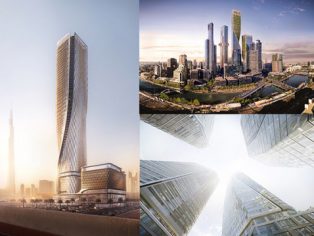 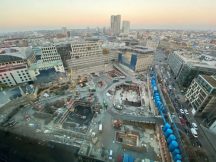 Constucting the wasl Tower in Dubai