Two against the odds

An architect and his former rugby team mate decided to collaborate on two semi-detached, energy-efficient homes in Surrey. But as Tom Boddy reports, they couldn’t have anticipated the challenges that awaited them

When architect Rik Hall (of Arc8 Projects Architects) decided to join forces with his friend, project manager Matt Johnson on a small residential development in Surrey, the pair could be forgiven for not anticipating what lay ahead. All such projects are demanding, but the array of challenges they had to navigate tested their resolve and abilities.

Their goal was a relatively straightforward pair of semi-detached houses, although designed to near-Passivhaus standards for low bills and high efficiency, on a semi-rural, leafy site near New Malden. Ever since they had been on the rugby field together as team-mates, Hall and Johnson had talked about taking on a new build together, later working together on projects in east London.

Johnson found the ideal site, intrigued by its unusual combination of seclusion and convenience, offering a tranquil setting and yet close access to the A3. Sitting on the site was a dilapidated Victorian cottage, with “no architectural merit,” says Hall, and in purchasing it they knew that demolition would be one of the first tasks.

Revealing legacy
It wasn’t long after purchasing the plot that Hall and Johnson discovered a major issue with the land. Not far down the road there had once been a gunpowder factory, built during the 1600s and still in production during the First World War. Resulting pollution had led to significant contamination of the soil over the years. Although they discovered this early on, it was a major setback, but rather than panic, Hall says they sat down to calmly resolve the problem.

The planning department’s officer responsible gave them two choices – install a membrane throughout the site, or strip the ground back to the virgin clay. While the latter meant pushing back the schedule and adding costs, they decided it was something they had to do. Hall put himself in the position of potential buyers: “If this was going to be me living there with my family I wouldn’t want there to be any possibility of soil contamination.” They removed all the contaminated soil, replacing it with clean subsoil.

Getting planning
The overall goal was two generously-sized, desirable family homes, “not just 12-metre boxes for five people,” says Rik. The first plan they submitted was supported by the planning department, however a tree protection order (TPO) was in force on the neighbouring property, so the design had to be checked by a tree preservation officer, causing more delays.

Hall believed he had addressed the TPO in the initial plan, but the officer wasn’t content, and was minded to refuse the submitted plan based on the root protection area required. Rik and Matt tried to show that their design would not contravene the restrictions, but the council insisted they redraw the plans.

Despite this, they worked alongside the officer on the redesign, and eventually both parties were satisfied. As a result, one of the homes is smaller than the other, with the rear extension needing to be set back due to the TPO. “We had to take this on the chin,” Hall ruefully says.

He advises others in a similar situation to “get in touch with planners as early on as possible” to tackle such problems collaboratively: “It’s about having dialogue, working with them as much as possible. You’ve got to submit something that any rational person can look at and go ‘yes I can see that if we can make a few changes here, I’ll be happy with it.”

Fire
With plans finally approved and demolition about to start, yet another challenge reared its head. Hall received an agitated midnight phone call from the neighbours, informing them their soon-to-be demolished Victorian cottage had caught fire, and the flames had damaged the neighbours’ shed.

At this point, Hall was starting to think that the project may be jinxed. Fortunately, the damage needing to be covered was minimal due to the planned demolition. Arson was initially suspected, or “a freak accident,” says Hall. The Fire Service speculated that with it being a particularly hot summer nearby compost could have self-ignited, although Rik is sceptical about this theory!

Another positive outcome was that the team managed to salvage all the bricks from the cottage and sell them to a local merchant. “Where we could, we reused and recycled any materials that were on site,” explains Hall.

Construction
After overcoming all the challenges, the build finally got underway in April 2018. The external envelope is somewhat unusual for this type of domestic project, being of insulated concrete forming (ICF) – hollow EPS blocks reinforced with steel beams and filled with concrete, offering high thermal performance.

Thermohouse UK supplied and installed the ICF frame, providing a “one-stop shop” solution. The shell was completed very quickly, taking eight weeks. “All we had to do was put in the windows and get the roof up,” says Hall. He says it’s a particularly useful option for such ‘self-builds,’ freeing up the programme from traditional construction methods.

“You can get the structure up, and then tender out the various pieces of work. It’s a lot more manageable.”

Passive approach
The plan in creating a very thermally efficient and airtight build, assisted by the ICF, was “never to aim for Passivhaus standards,” says Hall, “but to get as near as possible.” Although the goal was to create a pair of sustainable homes, true passive design was not within their budget, and an MVHR ventilation system, which would have been required to meet Passivhaus air-tightness standards, wasn’t feasible. Hall comments: “In an ideal world, we would have met all standards, but sadly in this case it was a bridge too far on the cost side.”

Instead, the design uses trickle vents within a whole-house ventilation system whereby in moisture- or heat-heavy rooms such as kitchen and bathrooms, a sensor activates so that the air is removed and replaced as needed.

As well as rooflights, solar PVs have been included on the flat roofs to the rear. The panels are currently making enough electricity to export some back to the grid. “Not a huge amount,” admits Hall, “but it helps.” He believes that the PVs will have paid for themselves in around six or seven years.

The two buildings have achieved an Energy Performance Certificate (EPC) rating of 88 per cent – three points off an A. To help achieve the construction efficiency standards they were aspiring to, Rik and Matt hired a specialist air-tightness consultant. Rik comments: ”The crux of the performance relies on the penetrations of the envelope being properly sealed. This is most crucial where drainage and services come into the building.”

Johnson and Hall wanted their build to fit harmoniously within the streetscape, and took design cues from neighbouring dwellings. The pair of houses have similar ridge heights and Edwardian-proportioned windows of their nearby counterparts. Hall explains the careful approach: “It is a well-considered Edwardian aesthetic, minus the bricks.” He adds: “If you’re going to do something completely out of character, you will be up against it from day one, and will have to go the extra mile to ensure the final product is aesthetically pleasing and considered.”

To create a functional space for a family, the homes’ interiors have been divided into two living zones. The upstairs – which Hall describes as a “more formal” area – includes the generously sized bedrooms, a study, and a spare room that can either be a children’s bedroom or a home office – a useful alternative in the current Covid climate. The interior detailing has also incorporated some traditional aspects, as well as being fairly neutral – with simple greys, white painted spindles, mahogany handrails, and carpet runners up the stairs.

The downstairs (essentially the basement due to the gradient), is where a more contemporary feel becomes prominent. It’s a large open-plan space with the kitchen at the front, dining in the middle, and a living area at the rear with bi-folding doors leading out into the garden.

With the downstairs being at ‘basement’ level, the design needed to allow as much natural light into the homes as possible. This was achieved by including lightwells to the front, east-facing facade. This allows the morning sunlight to pass through into the kitchen, and as it passes over, large rooflights in kitchens plus the bi-folding doors at the west-facing rear bring copious light into the ground floor.

The successful way the houses are embedded into the slope was picked up as a design exemplar by the council.

They have asked to use the project to demonstrate a good design approach on a sloping typography.

Despite the project’s litany of problems, Johnson and Hall have taken many positives from it. “It has been a huge learning curve,” says Hall. “The way we’ve dealt with the problems and come out on top, makes it for me a big success.”

The twist in the tale is that although the homes were built to sell on, Hall may end up moving into one as his house is currently for sale. This would mean he and his family would after all benefit from the close attention paid to the needs of potential occupants shown throughout the project. 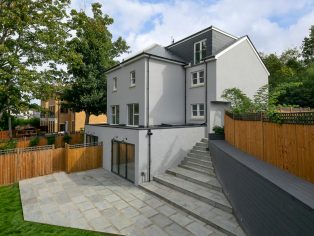