Harris Manchester College is one of the main Colleges at Oxford University. The Victorian buildings contain decorative wooden panelling, gothic revival architectural detailing and large stained-glass windows.  With a new construction site opposite the main building, Selectaglaze treated four rooms that were affected by noise and dust ingress in the Grade II Listed building: two meeting rooms, a student common room, and the Tate Library.

In the two meeting rooms: Series 20 slimline vertical sliding units were installed; colour matched in a wood grain finish to complement the wood panelling and reveals. They were glazed with 6.8mm acoustic glass and placed to optimise the cavity, ensuring high levels of acoustic reduction, as well as offering access for cleaning and maintenance.

The primary windows in the Tate Library are tall gothic arched windows, with three stained glass windows forming a main bay. They all had single glazed openings which could not prevent draughts efficiently or keep the noise out. To complement the interior décor and leaded casings, the timber sub frames and secondary glazing profiles were colour coated in 9005 Jet Black Matt.

The tall gothic arches measured around 4.5m tall and had a mezzanine cutting them part way, which made the design and installation tricky. The portion of the window below the mezzanine was a Series 10 horizontal sliding unit. Stacked above, in an area not requiring access, were two series 42 fixed lights. Above these up to the spring point, was another Series 10, followed by three Series 42 curved fixed lights including reverse curving to follow the lines and details of the tracery at the head. Installed with 6.8 laminate glass and a generous cavity; the space inhibits disruption, is warmer and provides UV shielding to the books and manuscripts in the Library.

The student Common Room needed a resolution to prevent noise entering from the neighbouring construction site, and also to stop noise escaping from it and troubling locals. Series 20 slimline vertical sliders were installed in white to match the interior design. 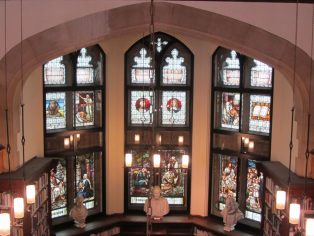