Actis Insulation’s Thomas Wiedmer says that while many specifiers continue to struggle to maximise energy efficiency in dwellings, low carbon results are achievable without adding significantly to the build cost

It is a truism that the fabric of a building is the key to its thermal performance. But it is perhaps surprising that, despite the fact that everyone in the construction industry is fully aware of this, many still struggle to achieve maximum energy efficiency to achieve the required SAP rating on houses.

Once the key criteria in achieving an efficient thermal envelope are mastered, there really should be no reason why all new builds from now on (including those that fall under the more stringent Building Regulations Part L requirements coming into force in June) are not as thermally efficient as humanly possible – without costing much more than building a ‘heat leaching’ alterative.

The key to attaining this state of nirvana is in avoiding thermal bridging; indeed this is an explicit directive in the current Part L, which states: “Insulation should be reasonably continuous over the whole building envelope. The building fabric should be constructed so that there are no reasonably avoidable thermal bridges in the insulation layers caused by gaps within the various elements, at the joints between elements such as those around the window and door openings. Reduction in thermal performance can occur where the air barrier and the insulation layer are not contiguous, and the cavity between them is subject to air movement.”

Using flexible insulation, vapour control layers and breather membranes can go a long way towards addressing this, as they help reduce the margin for error, making the chances of thermal bridging very slight. This sort of product, due to its flexible nature can be guided into place rather than having to be cut accurately, can be installed in a continuous layer, thus providing a seamless air barrier and creating a better performing building envelope.

New Part L regulations extend the emphasis on thermal bridging further and propose that drawings should be provided for junctions and that before elements are concealed, an onsite audit should be undertaken to confirm that the designed details have been constructed, with particular focus on product substitution. Recognising that construction detailing is one of the biggest issues causing the performance gap. Tying projects up with specific details used is important to close the gap between designed and expected performance.

This might sound onerous, but there is help at hand; You can use junction details from a reputable non-government database containing independently assessed thermal junction details, such as Local Authority Building Control’s Registered Construction Details Library (at www.labc.co.uk). They offer a combination of specific detail, good practice and points to watch, together with a range of modelled psi-values using different build ups. The LABC RCD are freely available and also accessible on the go and drawings and documents can be fed into specifications for projects.

While specifiers are given an element of flexibility on how to balance the efficiency of the building fabric and building services – two elements which are crucial for the SAP rating – the Target Fabric Efficiency Rate (TFEE) limits the U-values of thermal elements, ensuring that an efficient envelope provides the backbone to an energy efficient house.

A 15% leeway given under the FEE is aimed at ensuring developers can’t build homes whose envelopes are inefficiently constructed and make up the deficiency with excessive use of renewable technologies. It doesn’t have to cost any more to insulate a house to an impressively low U-value than to insulate it to the minimum required thermal efficiency.  Some insulation materials are easier and quicker to install than others – so those which take less time obviously mean fewer man hours and therefore less outlay on labour.

The more thermally efficient the building, the less needs to be spent on renewables to achieve the required energy efficiency targets. The motto is ‘fabric first’ – that is, look to making your building thermally sound as a priority rather than finding ways to warm a constantly cooling, poorly insulated internal environment – which, as well as being a nuisance, is a waste of time and money.

The most usual places where thermal bridging can be found are at angles, where one element joins another – the eaves, for example. Basic science dictates that if you use something solid and inflexible to insulate a roof with all its many various shapes, there’s a greater chance of gaps, which then need to be infilled with compressible tape or expansion foam. Using a flexible, stretchable, forgiving product, on the other hand, means that the gaps can be eliminated. Its edges can be overlapped and taped together to ensure an airtight seal and a continuous insulation layer.

Vapour control layers, used on the warm side of any insulation material – behind the internal finish in roofs, walls and ceilings – can massively reduce the risk of interstitial condensation and provide air tightness. Some also act as an insulation, which means the thickness of the main insulation can be reduced to achieve the same U-value.

A breather membrane is designed to control moisture, and like vapour control layers, some also act as insulation. Reflective and watertight, yet vapour permeable, breather membranes are used on the cold side of roofs and walls. Because water vapour molecules are smaller than those in water droplets they let moisture out, but not water in, and add air tightness and boost ‘thermal resistance,’ by keeping heat in. 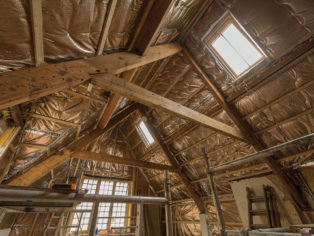