The devil’s in the detailing

Brick, which has of course been a major part of the British built environment for thousands of years, is undergoing a renaissance. The material is finding fresh audiences for the way it can add texture to buildings in exciting, innovative and contemporary ways. Not surprisingly, new generations of architects are seeing the potential of ‘hit and miss’ cladding techniques and projecting brickwork on large scale urban projects as they seek to push boundaries with more ambitious and visually striking facades, such as those seen on the 2017 RIBA National Award winning Victoria Gate in Leeds. Modern methods of construction, using digital imaging and precast concrete, have further opened up design possibilities, enabling complicated textured brickwork patterns with a complexity of detail, which would have been impossible with traditional construction, while adding the associated advantages of faster and more efficient off-site construction. However, as the design potential for more ambitious and elaborate facades grows, so do the technical and physical demands made on projecting brickwork in exposed applications. Traditionally, F2 has been the recognised standard for frost resistance of facing bricks, with ‘Class A’ engineering bricks – having high compressive strength and low water absorption – offering the highest level of durability.

However, the fact that F2 certification offers the highest frost resistance classification for facing bricks in flush finished brickwork does not guarantee that the same bricks can withstand the more severe omnidirectional freeze-thaw conditions seen in exposed applications. In fact, in textured brickwork tests, many F2 facing bricks have actually experienced failures which could potentially result in the degradation of the bricks when they are projecting. In reality, the level of freeze-thawing experienced by projecting brickwork is far more severe than conventional flush brickwork and closer to in fact that of pavers. As the ‘bed’ face of the headers is more exposed to the elements, there is always the potential for the rainwater to sit on the ‘bed,’ causing the brickwork to become saturated, and then be vulnerable to freezing and deterioration. Despite the need for bricks with much lower water absorption rates in exposed applications, there is currently no industry wide standard in the UK specifically for ‘hit and miss’ or projecting brickwork, unlike in Holland and parts of Europe, where tougher tests similar to paver freeze-thaw tests are beginning to be introduced. At present, the onus is on individual manufacturers to have their own products freeze-thaw tested to a higher level, and their results published. The onus is also on architects to check with the manufacturer that their specification is suitable for detailing that deviates from a standard flat panel. There now a strong case for projecting header bricks to be tested to 100 freeze-thaw cycles (with no cracks), on all five exposed faces at projections of a minimum of 30 cm and preferably 50 cm, in order to give architects and specifiers complete reassurance that they are fit for purpose. Victoria Gate Victoria Gate in Leeds, part of Hammerson’s Victoria Leeds Estate in Leeds city centre, was developed and inspired by its local historic and architectural context. Designed by architects ACME, the creative and innovative use of projecting brickwork produced what is considered to be one of the most intricate and distinctive brick and concrete facades in the country, with an elaborate pleated pattern on three external elevations of the new arcades building. The challenging scale and complexity of the 6,000 m2 geometric brickwork facade was delivered through a combination of high specification materials, the latest advances in digital technology, and last but not least, innovative use of off-site constructed pre-cast panels. Approximately 360,000 ‘Class A’ Staffordshire Red ‘snap headers’, bespoke specials and brick slips, were supplied by Ketley Brick. Purpose-designed to include perforations or ‘snaps,’ two headers were generated from each engineering brick without cutting, whilst providing a positive ‘key’ for casting onto a reinforced concrete backing. BIM processes and 3D mould technology enabled Thorp Precast to plot and place every individual header onto the 550 pre-cast panels, seven, nine, 11 or 13 bricks wide, and repeated in differing lengths. The tops of the panels were dressed with corbelling made from full bricks with a dedicated cut out to secure them to the concrete backing panel. Considerable time was spent researching bricks, which not only had a precise form and sharp-edged aesthetic to suit the geometrical design, but also the physical characteristics to withstand freeze-thaw conditions at exposed projections of 25 cm on all three facades. 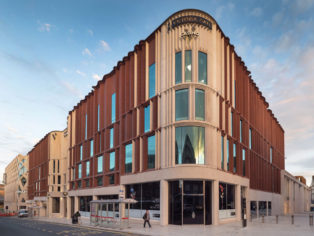 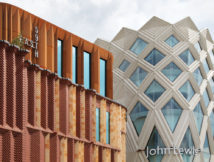 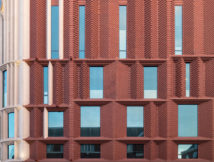 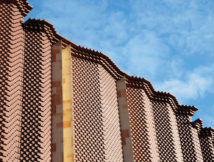