The Atlas Building, the tallest tower in London’s Tech City area has completed

Delivered by Design Delivery Unit, with a concept design by Make, the 40-storey residential tower and adjacent 10-storey commercial building sit on a prominent site on City Road, a stone’s throw from Old Street Station.

Providing a prominent marker and a positive addition to Tech City, the buildings sit above London Underground and Thameslink lines. The tower delivers 302 apartments with leisure and spa facilities and basement parking. While the commercial building is occupied by WeWork and provides access to three  roof terraces, with external green walls. Over 35% of the footprint is new public realm; with a
landscaped piazza of shops and cafés created between the two buildings, providing a new pedestrian link between City Road and East Road.

The Concept Design
The architecture clearly responds to the building’s urban context, and maximises the potential of the site and location. The concept design is sleek and simple. A series of 12 vertical blades articulate the elevations and work together to compose the tower’s striking façade. Contrasting elevations have been created with more solid anodised aluminium façades with punched windows to the east and west contrasting with the predominantly glazed elements of the north and south elevations which capture the views and maximise natural light.

The blades are connected by glazed infills which provide floor-to-ceiling windows and ensure all residents have private outdoor space.

As the cladding reaches the ground the level of transparency increases, offering more active frontage at ground floor. This together with the creation of a double-volume space at the front southern tip, imbues the building with a sense of lightness that is at the same time very dynamic.

Internally, the building accommodates a range of apartment types each with open-plan living and dual aspect views. All have generous balconies with roof terraces for apartments at the penthouse level that sit within the tapered roof as the blades descend.

“The tower has pushed the boundaries of design in this fast-changing area. It needed to stand out, and that has certainly been achieved.” Tom Appleton – Director, Rocket Invest.

A boutique kiosk to be occupied by Infarm, the vertical farming company, located at the southern prow of the site announces the building on the approach from Old Street station ahead of the residential entrance.

The Delivery Challenges
The Atlas building has a cantilevered structure due to the below-ground constraints of the underground and Thameslink lines, which cross at the southern tip of the site. This discovery at Planning stage changed the concept for the structural strategy, resulting in the creation of a new superstructure design to prevent the building from twisting and leaning. Impacting upon all consented internal layouts. Large shear walls had to be introduced and the core redesigned with column locations and sizes altered. Whilst the façade concept was maintained, it was carefully deconstructed and redrawn to suit the new layouts, with the original architectural language safeguarded.

The mass provided by the frame (and by increasing the thickness of the ground floor slab and the mezzanine first-floor slab) helped give the structure sufficient inertia to dampen the ground-borne vibrations from the underground trains.

The original approved planning consent was for a series of white and off-white shades of terracotta cladding for the façades. However, with the stability issues raised at post planning, the weight of the terracotta posed a challenge with the cantilevered building. Design Delivery Unit advised the Planners of this and demonstrated options that could be achieved using an anodised aluminium. Following modelling
and testing of the material we were confident that given the scale, repetition and shape of the façade, a unitised system would work and would still achieve the original vision.

The delivered tower respects the original design intent, to create a stunning addition to the London skyline and contributes to the regeneration of this part of the capital. 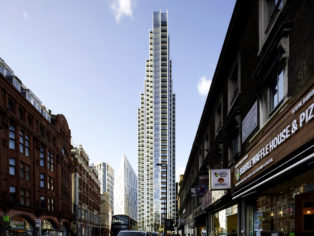 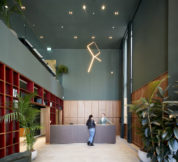