Thousands of pieces of reclaimed timber were used to create a “directional vortex” and a monolithic grand staircase for the award-winning Hotel Hotel interior in Canberra. Stephen Cousins reports

Walking up the grand staircase and into the lobby of Hotel Hotel, a new boutique hotel located in Canberra, South East Australia, you get the uplifting, and disorienting, sensation of being thrust into hyperspace whilst moving through a lumber yard.

The walls and ceiling that surround the stair, a key element of the hotel interior design by Melbourne-based practice March Studio, are covered with over 5,000 pieces of reclaimed timber suspended in “mid-air” on some 1,200 vertical steel rods.

The scattered timbers filter light in from outside the  building, casting pixelated shadows across the floor and the staircase, itself a stacked agglomeration of chunky reclaimed timber sections.

The strips of timber give the impression of the blurred movement experienced when moving at high speed, which stands in contrast with the humble simplicity of the wood.

So powerful is the effect of this space, and other elements of March Studio’s scheme for Hotel Hotel, that it won World Interior of the Year at the INSIDE World Festival of Interiors in Singapore in 2015, beating 100 other nominated projects across nine categories to take the prize.

In delivering their verdict, the judges commented:

“The choice of raw elements gives a warmth and familiarity mixed with the excitement of the unexpected. They combine to make a powerful but not overwhelming series of spaces.”

March Studio’s brief was to design the interior for the hotel’s ground floor lobby, including the grand stair accessed from Nishi Commercial’s lobby, a reception area, bar concierge, retail and hospitality tenancies.

The brief for the lobby was to create spaces that encourage residents, guests and visitors to linger in what would otherwise be a transient space characterised by open space and large cylindrical structural concrete columns.

March Studio’s design draws inspiration from the splendour of the building’s construction site, a melting pot of both chaos and precision. The use of recycled material was a key client requirement, and timber was salvaged from across the site, including piles of formwork beams, cut offs from the Blackbutt (Eucalyptus pilularis) timber facade, and reclaimed wood from other sources.

The practice has previously exploited the robust simplicity of raw materials, most notably in its design for a series of stores for Aesop. The floor and ceiling of the store in Paris is covered by 3,500 planks of wood, many of which jut out to create shelves on which products are displayed.

For the hotel lobby, the practice wanted to create an instant patina using a palette of materials with character and age, primarily recycled timber, exposed concrete beams and steel panelling.

In a statement, the architect commented:

“The walls in the hotel lobby, the seating, the benches, the counters, are an attempt to bring the handmade into the rigorous, polished building around it. Materials such as custom glulam timbers and precast concrete beams are allowed to sit, unadorned, stacked in a simple manner, overlapping, their joints overrunning and poking out. The singular system – the same for both materials – is stretched where needed, opened where useful, broken where forced.”

The grand stair links Nishi Commercial to Nishi Residential, a multi-storey apartment building housing two floors of hotel rooms, wrapped around a central courtyard and a light well. It was designed to function as a stage for

performances and idle procrastination and, Jenga-like, is made up of heavy glue-laminated timber profiles stacked in an agglomeration to give a semi-random appearance.

The timbers suspended in the air around the staircase were positioned to create a “directional vortex” intended to lead visitors upwards and into the hotel spaces. The timbers form irregular patterns around the precast concrete pillars, blurring boundaries between lobby areas, framing views outside and between interior spaces, and creating patterns of light and shade.

“Freed to scatter up the walls and across the ceiling, the suspended timber filters exterior light and views into and from internal spaces,” said March Studio in a statement. “Spidery, pixellated shadows are cast on the floor and bare walls.”

The wood was installed in a variety of widths and lengths and drilled with holes to accommodate many different widths and lengths of steel rods. The tricky and time consuming work was carried out by main contractor/carpenter CBD to adhere to March Studio’s master plan.

Two walls, one made of concrete, one of stacked recycled timber, snake around the entire perimeter of the project, creating areas to sit, areas at the bar, areas to work, and continuing outside to form a secret garden.

The reception area leads through to the bar and in both spaces bare concrete beams are stacked to create tables and surfaces and also extend outside to create a seating area. The bar is utilitarian in appearance, a combination of black steel and concrete, using materials that get better with age. Decorative lighting fixtures hang from the ceiling and large holes were punched into the concrete slab above the seating in front of the bar to provide glimpses into the courtyard above and allow natural light to penetrate into the space.

The language of weightless steel, utilized around the staircase, is picked up in steel doors designed to be part opening, part display. The stacked concrete props up the sleek steel elements that weave into and halt the flow of suspended timber exploding out from the stairs and the commercial lobby.

The main entrance to Nishi Residential, opposite the top of the stair, was also part of March Studio’s brief. The practice said in a statement:

“Outside is a canopy that shrugs off its weight with flowing timber recalling the Nishi Commercial lobby. The entrance airlock is lined on two walls and ceiling with what could be steel punch cards for an ancient mainframe. Filling the gaps punched in these steel sandwich panels are amber marbles, thick glass which filters the light and warms the space.”

The INSIDE World Festival of Interiors judges felt that March Studio’s innovative design for Hotel Hotel had created a “Bilbao effect” (recalling the impact of architect Frank Gehry’s design for the Guggenheim Museum Bilbao, in Spain) that has helped to rejuvenate the area. They described it as a “masterful integration of different spaces into a seamless and delightful interior.” 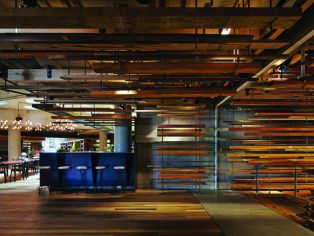 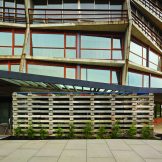