A new, multi-million pound arena in Swansea clad in gold and nearly 100,000 LED lights has become the UK’s first major events venue to complete in the wake of Covid-19.

The new Swansea Arena, designed by architects ACME, can showcase dynamic visual content – using the tens of thousands of LED lights to form a giant wraparound display. During the daytime, the striking new venue shimmers in bright gold. At night, the exterior lights up in a dazzling array of colours using the thousands of individuals lights.

A star-studded programme of acts is lined up to play Swansea Arena this year, including Alice Cooper, Royal Blood and Welsh funnyman Rob Brydon, who recently praised the arena as a “huge cultural boost for the city.”

Swansea Arena is at the centre of Copr Bay – a £135m regeneration scheme in Swansea city centre which will also deliver a new 1.1 acre coastal park – the city centre’s first new park since Victorian times – as well as new public realm and a landmark public bridge. New apartments and new independent restaurants will also soon open at the scheme. 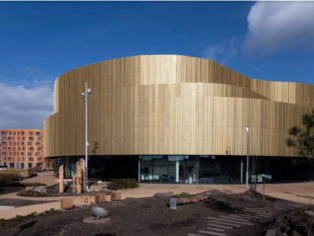