Safety rises to the top

Representing the biggest improvements to building safety in nearly 40 years, the Building Safety Act will have far-reaching implications. Nick Mellor at LEIA explains what it means for design of evacuation lifts for all users

In the wake of Grenfell, the initial focus of the Building Safety Bill is understandably on higher risk residential buildings. This follows recommendations from Dame Judith Hackitt in the ‘Building a Safer Future’ report for a “new regulatory framework to develop an ‘integrated systemic change’ with a greater focus on getting building design and ongoing safety right.”
In a nutshell, the Bill is concerned with improving consistency and oversight between the entire supply chain to improve safety. This means that a digital record will be created for projects, presenting a ‘golden thread’ of information starting from design, right through to construction and occupation. All of this will be overseen by a new building safety regulator. While the Bill will eventually be primary legislation (essentially high-level ‘enabling’ legislation), much of the detail will come out through more detailed, secondary legislation.

For architects, or the principal designer on the project, this means new requirements to plan, manage and monitor design work to ensure it complies with Building Regulations. In addition, there is the requirement to cooperate, communicate and coordinate work with other duty holders in the process. So where does this leave you when it comes to planning evacuation lifts and adhering to standards?

However, the use of lifts for the evacuation of disabled people is being looked at in several pieces of work. There has been work to draft a European standard which would be EN 81-76 (‘Evacuation of persons with disabilities using lifts’). A draft for public comment should be circulated in May 2022 which will include proposals for optional evacuation modes including a driver assisted operation – similar to but a development on from what we have seen in British Standards – and an automatic evacuation operation.  Approval and publication of a final EN 81-76 (2023 at the earliest) is not guaranteed so the draft EN 81-76 should not be referenced as if it were a standard.

The possibility of an automatic evacuation operation for disabled people to self-evacuate without assistance was recognised by the new London Plan – published in March 2021 – which includes Policy D5(B5) requiring development proposals to be “designed to incorporate safe and dignified emergency evacuation for all building users. In all developments where lifts are installed, at a minimum at least one lift per core (or more subject to capacity assessments) should be a suitably sized fire evacuation lift suitable to be used to evacuate people who require level access from the building.”

London Plan
The changes in the London Plan will have very significant implications, not only in London, but also in influencing other guidance and recommendations revised to respond to similar challenges.

In the meantime, work started at BSI to revise BS 9991:2015; a draft for public comment was published in August 2021. This supported the London Plan policy for all building users to be able to evacuate from a building as independently as possible and included proposals for all developments where passenger lifts are installed to have at least one evacuation lift and for buildings in excess of 18 metres in height to be provided with more than one evacuation lift. These lifts would have protected lift lobbies and other protection such as secondary power supplies.

It is not certain whether the final published BS 9991 standard will include these proposals, so the draft should not be referenced as if they were a published standard. However, we do expect that forthcoming standards will focus on improving the evacuation lift provision in new buildings.

Until other standards are published, there is currently only one description of an evacuation lift: BS 9999:2017, Annex G. BS 9999 also includes all the building elements needed to protect and power the evacuation lift.

While any revised BS 9991 and BS 9999 will set the benchmark for new buildings, in her report Judith Hackitt recognised the need for a continued and determined focus on driving improvements in (fire) safety in the existing housing stock and that, “If there is just a focus on new build, the required improvement in safety in all existing high-rise residential buildings will not be achieved.”

Speaking on behalf of the group Actuate UK at the Construction Leadership Council’s COP26 session, Michelle Agha-Hossein highlighted that 80% of buildings in existence today will still be in use by 2050. While she raised this in relation to improving sustainability, it also has implications for improving building safety; the improvement of existing lifts will become a major factor. 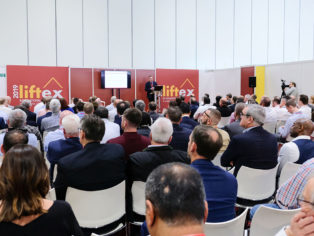