Royal Greenwich Trust School (RGTS) has celebrated a major milestone towards completion of its £13.4 million extension and refurbishments project, funded by the Royal Borough of Greenwich, during a special topping out ceremony

Construction of the state-of-the-art extension started in 2019 and is due to be completed in June 2020. The new accommodation will allow for an additional 450 students, taking RGTS’s pupil quote to 1,050.

During the event, which took place on Wednesday 22nd January 2020, guests from RGTS, Willmott Dixon, architect Astudio Limited, Mott MacDonald, Skelly & Couch, Lyons O’Neill and Gleeds were given a tour of the building. This was followed by speeches from Professor Peter Heathcote (Chair of University Schools Trust), Cllr Mick Hayes (Mayor of the Royal Borough of Greenwich) and Adam Worrall (Director of Willmott Dixon London & South).

“This is a key milestone for the project, which we will deliver to high standards and exacting quality. The completed extension will bring world-class educational facilities to the students at Royal Greenwich Trust School, enhancing the teaching and learning environments and improving educational opportunities in the Borough for many years to come.”

“The new build marks an exciting and significant point in the school’s history. The new facilities will transform the educational experiences of our students and provide a much-improved working environment for our staff. The school is certain to go from strength to strength and we look forward to a bright future ahead.”

“This exciting expansion project will improve the prospects of children and young people attending Royal Greenwich Trust School, giving them state-of-the-art facilities to help them reach their highest potential. It’s fantastic that Royal Greenwich has been able to enrich local pupils’ education opportunities by funding these school improvements.” 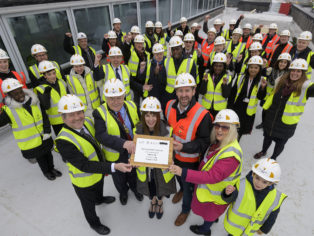