From radical refurbishments and modern extensions to ventures into housing development, Hogarth Architects has made a success of the residential sector, as Teodora Lyubomirova found out.

Stick to what you’re good at – this has been the underlying notion underpinning Hogarth Architects’ business philosophy, according to Ian Hogarth, director of the practice. However, while this might suggest playing safe, the west London architects have made a name for themselves designing ‘radical refurbishments’ – exemplar modern extensions displaying a bold vision for incorporating space and light into schemes.

Formed in 2003 out of the ashes of Littman Goddard Hogarth, where Ian was a partner before the trio decided to split, Hogarth Architects had fairly tough beginnings.

“When we started in 2003, it was literally me and an assistant working in my daughter’s bedroom,” says Ian Hogarth.

Within four years, the firm had moved into what is still the practice office, at the corner of Dawes Road and Estcourt Road in Fulham. He says the key to success was starting with low overheads and focusing on a single sector – residential – instead of competing with other practices for ‘massive buildings’.

The office is itself an example of the architects’ transformative approach to space. In owning it, Hogarth is in the unusual role of a landlord and tenant of this modest basement and ground floor property, which had previously been used for various functions ranging from a grocery store to a massage parlour before the architects turned it into “a nice place to work.”

This was done through a careful adaptation of the internal spaces to fit in a naturally-lit reception and waiting area at upper level, with a translucent glass wall through which visitors can see the architects working downstairs. There’s also a subsidised canteen at the back and a secluded meeting room near the reception.

Downstairs, the architects – consisting of three associates, three project architects, and a number of architectural assistants in the process of completing their professional qualification – sit together in an area that enables them to “call out from where you sit and talk to every member”, as Hogarth puts it.

When asked whether there’s a desire to expand elsewhere in the capital, Ian concedes that a move to a central London location could be on the cards, particularly if an opportunity to transform the current premises into housing arises. He jokes, “My older practice used to have very swanky offices on the river and we used to watch the river all day and lose money,” adding, “I think we are settled in this size at the moment.”

The 18-strong team at Hogarth Architects is formed by a multi-national bunch of professionals from a range of countries including Greece, Lithuania, Slovakia and Canada.

“We are ‘nationality-blind’ – we take the best people regardless of where they come from,” explains Hogarth.

All three associates are from overseas – Stella Nikolakaki and Maro Kallimani from Greece and Laurie Maclaren from Canada – and a number of trainees hail from the continent. Moreover, the associates have all either worked at bigger firms including Foster + Partners and ZHA or ran their own practices (or both), but for a variety of reasons chose to work at Hogarth Architects.

Hogarth comments on the trade-offs some staff have experienced from working at larger practices:

“To do this sort of work may not be as glamorous, but they have authorship on their work – they meet the clients and dictate the direction of the project.”

Quizzed on how much design freedom is granted to his employees, Hogarth explains,

“We don’t have a house style per se but we all plough the same field,” with some at the practice having a stronger interest in sustainable methods, and others focusing on historic buildings and restorations for example; this diversity bringing a breadth of expertise. “You can see the threads going through all our work – light and space, modern ways of living, just getting the maximum value out of a site or property.”

There’s also a focus on nurturing talent within the practice rather than employing ‘ready-made’ professionals. “We tend to train our own , says Hogarth, adding “we take on Part 2s and provide for their training, and in return for we ask them to sign a trivial contract to stay – it’s very rare that we’d actually advertise for a senior position.”

The practice works for private individuals or developers but also for hotel firms, and on restorations and refurbishment projects.

“What we do is ‘radical refurbishment’, says Hogarth, “We take a building and do massive structural work to bring in light and volume.” He adds, “On listed buildings we tend to restore and then add modern extensions – we don’t do ‘fake’ old extensions – we like to be able to say ‘this is our work’.”

Another commendable strategy adopted by the practice is specifying as standard sustainable solutions, such as heat-recovery ventilation or good levels of insulation.

“We ask the client ‘why wouldn’t you do it?’ rather than ‘would you like it?” says Hogarth.

Beyond their work for private clients, the practice is increasingly focused on schemes created under Hogarth Architects’

development arm, Hogarth Homes. This includes the development of four brightly-coloured houses on Ash Row in Bude, Cornwall, which are designed ‘upside down’, with double-height living spaces on the top floor overlooking the vast green expanses and the sea, with bedrooms situated on the first floor. Each house is equipped with high-quality bespoke kitchens and staircases, bedrooms with en suites and terraces overlooking the scenery.

“My interest in Cornwall is really just because I’d like to try and test my own beliefs and decisions in the market,” says Hogarth, who is planning to build eight luxury town houses in the area under Hogarth Homes, including one for himself. This will be on farmland in the picturesque village of Poughill on the north Cornwall coast, and each property will be designed to make the most of its setting and equipped with high-end features such as plunge pool and hot tub.

Back in London, Hogarth Architects are working on a scheme just round the corner from their office, transforming an old tyre shop into two modern maisonettes in Estcourt Road, South Norwood. Other schemes include a 55-room hotel in a conservation area in Kensington; a modernisation and extension of a listed building in Primrose Hill, which will benefit from triple-height spaces above the living area and a mezzanine in the loft; a retrofit of a private home, where the architects are remodelling the interiors for open- plan living. Another project in a conservation area is the stone-built Grafton House in Wandsworth, which will be remodelled into four generous flats, with a new basement created and a modern timber/metal-clad extension adjacent to the existing property.

Ian Hogarth’s name hit the mainstream when TV show Grand Designs picked Hogarth’s family home for one of its episodes back in 2012. The property, most notable for its ‘disco’ basement, with illuminated floor and club-worthy lighting and audio equipment, became so popular the architect and his wife, Claire Farrow, had organised weekly club nights ever since, which became a victim of their own success, as he explains: “Our nights have outgrown the house – we have to hire a club now.” He adds that the property may have to be repurposed when his children, who were both teenagers when the home was completed, ‘fly the nest’.

However, until then, the 2,600 ft2 property is occasionally let out via home-swapping websites, while Hogarth focuses on his new project in Cornwall, as well as the occasional office outing.

“The whole office is going to Cornwall this weekend,” he says. “We’ll do coasteering and some long walks and to talk about the design of the new homes,” Hogarth concludes, affirming the practice’s image of a closely-knitted group of architects with a shared passion for work and life. 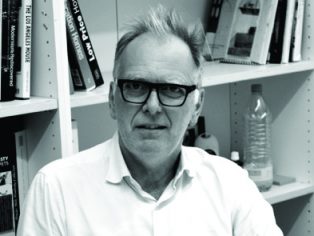 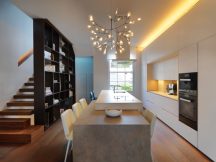 The practice’s refurbishment of an apartment in Oakley Street, Chelsea 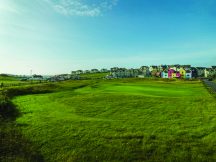