BuckleyGrayYeoman is a name that is increasingly heard in connection with award-winning projects, as Norman Hayden discovers.

Over the past 20 years BuckleyGrayYeoman has developed a growing reputation for delivering high-quality design that has been acknowledged by a number of recent awards and has seen the practice climb to a position of 48th in a list of the 120 largest architectural firms in the UK.

Formed in 1997 and based in London’s Shoreditch, the architecture and design practice specialises in offering what it describes as “pragmatic and deliverable solutions to complex design issues”. With an expanding portfolio of work across a range of sectors including offices, residential, retail, hotels, schools and masterplanning, BuckleyGrayYeoman prides itself on delivering projects on time and within budget, regardless of the size or complexity of the challenge.

Directors Matt Yeoman and Paul White lead a staff of 90. Paul, who gained his architectural diploma from Manchester and a BA from Leeds joined the company in May 2006, and has over 20 years of professional experience. He works with national and international clients delivering projects across a wide range of sectors including office, leisure, education, residential and retail.

Heading up the education team, he is currently overseeing a number of projects, including the redevelopment of Channing School in Highgate and the recent completion of one of the UK’s leading independent girls’ schools, Roedean. The school’s Grade II listed boarding houses have undergone a complete overhaul. In 2014, Paul oversaw the new-build contemporary IT and events building at Forest School in Snaresbrook, north east London.

White is also leading the masterplan for Chelmsford County High School for Girls in Essex. This significant development will provide new facilities for the school while remaining sensitive to the original historic buildings on site.

White’s involvement in major workplace refurbishment schemes includes the remodeling of the old F.A. HQ in Soho; a 64,000 ft2, eight-storey building for Aviva Investors. Aimed at the creative industries, the workplace offering provides a robust aesthetic with a palette of concrete and steel. For Lasalle Investment Management, he oversaw the sensitive refurbishment of a Grade II listed 34,000 ft2 office building in the Covent Garden Conservation Area.

White is currently overseeing the comprehensive remodelling and refurbishment of a landmark 200,000 ft2 building on Old Bailey. The scheme, which includes two extra floors, will position the building in the top segment of the refurbishment stock.

Most recently, he led the design team on the major upgrade and repositioning of Commodity Quay, St Katharine Docks for Prestbury Investments. Some 130,000 ft2 of commercial space has been transformed, incorporating a dramatic double-height entrance space linking the front and back entrances.

He also refurbished 30 Market Place for CBRE Global Investors, undertaking a series of complex structural changes to enact a complete transformation inside and out, Caroline House, a commercial office project in Holborn, creating 14,000 ft2 of office space, and the Covent Garden head office of Fred Perry.

Fellow director Matt Yeoman holds a DipArch from Oxford and a BA (Hons) from Canterbury and was a founding partner. He recently completed several projects in the workplace sector across London, such as C-Space, a former carpet factory on Old Street and Yalding House, the home of BBC Radio. Matt is currently working on 750,000 ft2 of office space at the Goodsyard in Bishopsgate.

Matt says his constant drive is to achieve simplicity in design, believing that even the most complex design constraints can be overcome with practical and effective solutions.

Further completed projects by BuckleyGrayYeoman include Henry Wood House, a major co-working space for The Office Group in the West End of London. A further project of note is The Passage, which is thought to be London’s largest voluntary sector resource centre for homeless people.

In addition, the practice has worked on several boutique stores for the Fred Perry brand in London, Cologne, Munich and Bangkok, the Citadines Apart’hotels in London, Paris and Hamburg, and Pure Aldgate, a high-quality student accommodation building in east London.

Pure Aldgate is seen as an iconic project with its 20-storey tower containing over 400 student bedrooms and social spaces, including a SkyLounge on the top floor with spectacular views across London.

White also points to the Channing School project as being particularly satisfying.

“We have enjoyed a long and creative period working with this school and client,” he comments.

“Initially, we designed their new dining facilities, but most recently it was completing the new sports hall and sixth form facilities. Following this award-winning new-build project, we are currently on site with the next project for the school, which is their performing arts building, due for completion in early 2017.”

Earlier this year, BuckleyGrayYeoman announced its involvement with a new gallery concept being unveiled at Cromwell Place in London’s museum district in Kensington. The project will see a cluster of up to 30 galleries operating in five listed buildings opposite the Natural History Museum. This new gallery hub of over 35,000 ft2 has been designed to house offices, flexible exhibition space, viewing rooms and art storage.

Pondering the firm’s current work portfolio, White says: “It is very varied. We have just received planning permission for a new creative retail and maker space hub in Belgravia for Grosvenor, which will start on site later this year.

“We are currently on site with three new-build office projects in Central London for the Berners-Allsopp Estate and Great Portland Estates and we are also about to submit a planning application for a new-build gallery in South Kensington. This will be a significant addition to the already burgeoning art gallery scene in the area.”

What does he see as the biggest industry challenges? “The way we procure buildings,” says White without hesitation. He elaborates:

“The quickest and cheapest methods do not always deliver the highest quality of design – neither, for that matter, does it always deliver what the client wants and expects.”

Nevertheless, things look positive for BuckleyGrayYeoman. The practice currently boasts a turnover £9.5m with budgets from £500,000 to £30m and with many exciting projects on site and others about to move to detailed design, the future has never looked stronger.

“Our approach to having a broad range of sectors, clients and project sizes has created the foundation for a successful practice,” concludes White.

• Formed in 1997 and based in Shoreditch, London

• Award-winners across a range of sectors including offices, residential, retail, hotels, schools and masterplanning

• 90 members of staff including two directors and six associate directors 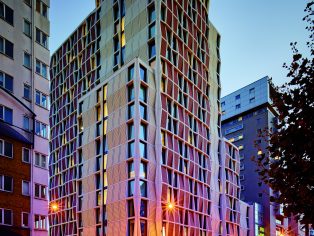