Scott Brownrigg’s design for a new purpose-built TV studio located at the Thames Valley Science Park in Shinfield has been unanimously approved by Wokingham Borough Council on behalf of the University of Reading.

This follows the University’s announcement in December 2020 of a deal with a US film studios investor to develop a major film studios to be known as Shinfield Studios. Scott Brownrigg have been tasked with envisioning the masterplan and architecture of this new complex.

With the University’s vision to create a new ‘Cine Valley’, the development forms part of Thames Valley Science Park, with the TV studio element aiming to be operational in 2022. It will host a range of popular TV shows, and is being developed to accommodate the latest broadcast and media technology.

Film and TV studios in their very nature are enclosed spaces, protected from the outside by an envelope that has to meet a high acoustic performance. Scott Brownrigg’s concept embraces this with a simple, elegant façade that is broken up by a stylish cladding system. The entrance to the building emerges as a glass crystal appearing to twist, opening up and welcoming all.

The first two floors are pushed back to create a protective canopy with the production facilities and talent room above. The materials have been chosen to be sympathetic to the existing Gateway 1 building, aiding in evolving the masterplan naturally.

The development will also uphold values of environmental sustainability, supporting the University’s aim to become carbon neutral by 2030.

Darren Browne, Commercial Director of the University of Reading, said:

“We are thrilled that the proposals have been approved by Wokingham Borough Council, the culmination of a great deal of detailed work by our team and our partners. It represents a great opportunity to further build on the growing film and TV ecosystem evolving through our Cine Valley vision, which will deliver significant investment and new jobs over the next few years.”

“We look forward to working closely with the wider community as the studio plans are delivered over the coming year.”

Professor John Gibbs, Head of the School of Arts and Communication Design at the University of Reading, said:

“The new TV studio will potentially create the opportunity for a range of work experience, placement and mentoring schemes for University of Reading students, and enable us to work with other local partners to develop opportunities for young people from a diverse range of backgrounds. These schemes could provide training and routes to careers in a variety of fields important to the growing creative media industry, which has been marked as of economic importance to the wider UK economy.”

“This is a great opportunity for the University, especially alongside the Scott Brownrigg designed Shinfield Studios, to enhance the position of TVSP as a global media hub. The new studios will be tailored to the company’s vision, flexible to the changing requirements of each production, and geared to fully meeting its sustainability objectives.”

Construction is planned to begin late 2021. 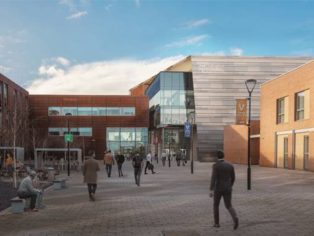