Often seen as the panacea for the housing crisis, is offsite construction methodology able to live up to its potential in terms of design quality as well as volume? Teo Lyubomirova spoke to four architects to hear their views.

Imagine being able to create good quality homes in large volumes and at a pace previously unseen. A utopian concept or a dream solution to the UK’s spiralling housing crisis? The Government is hoping for the latter as it promises to inject cash into schemes delivered by or incorporating ‘modern methods of construction’ (MMC), or modular offsite construction, as this burgeoning industry more commonly termed today.

However, although it has an attractive set of characteristics including speed of delivery, reduced on site hassle and greatly improved quality control, modular construction is still trying to shed its bad reputation of cheap ‘prefabs’ and poorly-designed high density estates built in the post-war period. This is partly why today industry experts, entrepreneurs and lenders baulk at saying the word ‘prefabs’ and prefer the tag ‘offsite’.

Scratching the surface of standardisation

Factory construction and, increasingly, automation is at the heart of the offsite construction process, whether it is volumetric modules pre-fitted with beds, sinks or toilets, assembled and ready to trans- ported and lifted into position, or panel systems prepared for on-site assembly.

According to Stuart Carr of Inglis & Carr, the main driver for success in this industry is expansion of the market and achieving higher levels of automation.

“We have to industrialise and standardise and creativity could flow from that,” he says. “If you set the performance specifications and the design parameters, then you can invite creativity.”

“There aren’t industry standard module sizes,” he says. When it comes to potential routes to mainstreaming offsite, he says: “Working closer with manufacturers to create standard protocols for modular is one way – and it’s starting to happen”.

However, Carr admits the billions required for a mass-scale expansion “just aren’t there” yet.

“If we were to try and industrialise in the same way the automotive industry has done, then we are biting off more than we can chew.” He adds: “We need to know who the end user is,” highlighting the industry’s reliance on continual orders to justify keeping factories running.

The Government’s £3bn Home Building Fund is intended to encourage firms to enter the MMC sector. Carr suggests it’s “basically a cushion” made to protect businesses entering the market. “We are really scratching the surface,” he says. “If you think about the cost of building 100,000 homes (the current supply shortfall), then £3bn wouldn’t suffice, so this is really low scale funding considering the scale of the
housing crisis.”

Beyond expansion and standardisation, just how far offsite methods are able to control construction quality is an aspect that has historically raised questions from lenders and clients alike, but perceptions are shifting, with the method now being sold on the basis of guarantees of quality. “I think we are moving past the reputational problems that prefabrication had and into an era where good quality is expected,” says Rory Bergin, partner at HTA Design – the practice behind some of London’s landmark modular buildings, including the 90 metre student accommodation facility Apex House in north London (pictured), which recently topped out after a reasonably swift 13-week lift and fit procedure.

“It’s much easier to guarantee the quality of a product made in a factory than it is on site,” Bergin claims, adding, “The building standards are much higher, we have much tougher standards for structural and environmental performance, we know much more about testing regimes and building design lives. The industry has learned a tremendous amount from the failure of building technol- ogy in the last 50-60 years; you have to be careful though that the products you use have been tested, accredited and meet the right standards.” Carr goes further: “Today you expect perfection, and that is down to manufacturing through the assembly line process in factory conditions. There’s absolutely no reason why building something in a factory should have a shorter lifespan than something delivered on site.”

Asked about the quality control procedures followed on HTA’s schemes, Bergin reveals this is no arms-length process for architects who instead need to work alongside manufacturers to ensure all elements are built according to brief, often with tests being carried out on a reference model. “It’s not a case of us doing some drawings and sending them off and then waiting for them to turn up (as modules); it’s a continuous conversation.” He admits once architects have nailed down the specification manufacturers become responsible for the structure – however, architects need to carry out the technical supervision of the construction process.

Within the design realm, flexibility and cost are closely linked. In education, where modular construction is often used to deliver whole facilities or extensions, it’s vital to have clarity on the design from the project’s inception.

This is because adapting a project for modular at later stages can prove costly.

“It’s not really that adaptable,” says Maari, “so if you are looking to expand, then it’s difficult to use that system.” He adds: “Getting the thermal massing is also quite difficult – if you’re going for a well-ventilated building, it’s challenging to get all the shafts and holes in the right places unless you plan ahead.” He concludes, “There are interfaces that need to be traditionally done and spans that can’t be modular; these still have to be an adaptation between modular and traditional build.”

Flexible modular solutions must arguably be on the table however if offsite is to enjoy mainstream success in the residential sector.

“Manufacturers recognise sites are not always square or rectangular; you have to be able to deal with different angles and shapes and planning requirements that drive us towards more complex building shapes than heavily-engineered system would want,” claims Bergin. He says the type of construction doesn’t need to affect the quality of design either: “There are two approaches: to make the building ‘look manufactured’ or like a building where the fact that it’s been manufactured is more or less invisible. We want to make buildings that look ‘normal’ – we don’t try to emphasise their being modular.”

Combining offsite with different types of frame, such as cross- laminated timber, also calls for a degree of discipline, architects believe. As Bergin puts it,

“I think good design comes out of constraints – I don’t think it’s ever come out of a blank piece of paper on an empty site and a complete freedom to express yourself,” he says. “The projects architects are most proud of are the ones in which they have had to use their ingenuity.”

So will offsite construction finally take off in housing? Bergin says that change will be driven by Government backing:

“Things are moving quickly and the Government’s £2bn Accelerated Construction initiative is aimed at supporting that and giving people a strong reason to invest in factories.” Maari, however, remains sceptical about any large-scale success, despite admitting the use of offsite construction is bound to grow due to the skills shortage as well as the increased cost of materials being witnessed currently. He says: “I can see it working with social housing and the like but not in the mainstream residential market. It’s taken off in North America because they see housing as a product – there you can pick your home from a catalogue – this is not the ethos in the UK and I can’t see it changing.”

For Carr, targeting a specific sector, such as Build to Rent, is the way forward to drive large-scale adoption of offsite.

“It’s predictable and tends to be funded by institutional investors and you’ve got a repetitive model; of course, you can apply creativity within that.” He highlights the fact that adopting standard criteria can lead to ‘enormous savings’ and create housing that’s environ- mentally friendly and constructed in a safe manner. Concluding, Carr says: “It seems to me modular is the logical conclusion of centuries of researching into how things work best.” 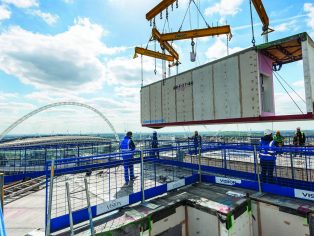