56 units were installed; comprising of four Series 45 side hung casements in the Chapel and 52 Series 46 slimline fixed lights installed in the Nave. The slimline Series 45 hinged casement system is suitable for treating many types of window and standard sized doors. Neat flush hinges and slim handles or flush locks provide clean internal lines. The Series 46 slimline fixed light can be shaped or curved to a full circle – ideal for church windows that do not need to be opened regularly. Little maintenance is generally required to well designed and constructed stained glass. Both the Series 45 and 46 secondary glazed units will reduce heat loss by up to 50%. High performance compression seals will almost eliminate drafts and ensure much greater comfort near the window.

A large circular primary window in the Nave was perhaps the most complex treatment due to its shape and elevated position.  Having previously worked on a similarly large circular window, a timber mullioned cartwheel frame was crafted to securely hold the secondary glazing. The timber subframes were built in segments with each mullion split to be screwed together within the window opening during installation, forming the cartwheel frame. Seven bespoke Series 46 fixed light segments were made for it and glazed with 6mm toughened glass to give additional rigidity and structural strength. 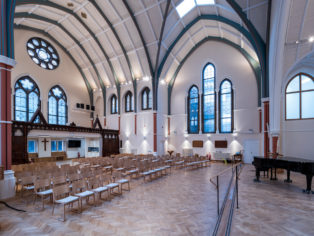