Our masterplan and architectural design for Shinfield Studios – a new state-of-the-art media hub at the Thames Valley Science Park in Berkshire – has received full planning approval by Wokingham Borough Council.

The £250 million film and TV studios will provide approximately 85,000 m² of sound stages, workshops, offices and ancillary spaces, becoming one of the largest film and TV studios in the UK. Four stages are now ready for operation, with a Disney production confirmed to start in 2022. Once complete Shinfield Studios will create up to 3,000 new jobs and is expected to generate total inward investment to the UK economy of approximately £600 million each year. 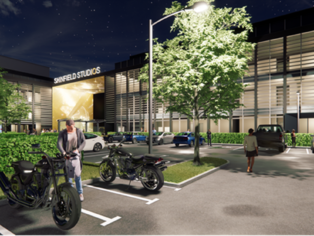