Pitzhanger Manor-house, as its late owner Sir John Soane referred to it, had passed through several hands until 1800 when the accomplished designer, whose practice held the post of architect to the Bank of England at the time, purchased it for a £4,500 sum. Working tirelessly on plans to renovate the manor in Ealing, Soane produced over 100 known drawings – attempting to realise the visions for his ‘dream villa.’ Incorporating his own idiosyncratic, but still classically influenced architectural style, renovation works were completed in 1803.

Soane left soon after, in 1810, the building then hosting various subsequent owners and occupants in ensuing years – among them, the Walpole family (relations of Spencer Perceval, the only British Prime Minister to have been assassinated). Then, in 1900 the property fell into the hands of Ealing Urban District Council to serve as a public library, and later a small gallery and exhibition space.

Jestico + Whiles were first approached by Ealing Council in 2009 who, along with Pitzhanger Manor & Gallery Trust, had put the heritage asset’s masterplan and refurbishment out to competitive tender. “It was fully operating, with people visiting, and the park was in heavy public use. The gallery was also operating with minor exhibitions, but it was all quite dilapidated,” says project architect Jude Harris. Responding to the building’s gradual decay, the council wanted to improve the public benefit of the asset by developing a masterplan which would better integrate the centre into its surroundings, while rehabilitating it with the addition of vital facilities.

A leading theme throughout the design process for the architects was the manor’s “demunicipalisation” which, for Jestico + Whiles, required bold changes to the building. These posed a high risk of planning conflicts; preservationism being the standard for Grade 1 Listed buildings like Pitzhanger. In addition to their respect for Soane’s original design, Harris cites the practice’s solid previous experience renovating historic buildings as the factors that carried them through the OJEU process to be selected as managing architects on the scheme.

Masterplan
As the focus of the masterplan, the manor sits at the north-eastern extremity of Ealing’s 12-hectare Walpole Park. The building itself is an amalgam of two designs: The original house, now named the Dance Wing, designed and built in 1768 by George Younger – to whom Soane was an apprentice, and Soane’s rebuild.

“We took the view very early on that the house should be restored to how Soane left it in 1810 – modest domestic spaces,” explains Harris. With the expectation of an influx of visitors post-refurbishment, the architects had to install the right facilities to cater for that, “which we chose to locate outside of the manor building,” adds Harris.

In addition to housing the new gallery spaces, the 1939 library building situated adjacently north to the manor was chosen to contain much of the accommodation necessary to make a cultural centre function; toilets, relocated reception and entrance areas, a shop, and plant facilities for the entire estate such as heating and air conditioning. “This meant that the manor house could be what it was intended to be – a domestic building,” says Harris.

Neither the manor nor the library building offered sufficient space for any catering facilities to provide refreshments to visitors, so a new cafe building was erected in a walled garden some 12 metres south of the manor – now known as Soane’s Kitchen. Given its position and context, the architects wanted to keep the building as discreet as possible: “It’s a single storey building with a garden roof,” says Harris.

In terms of materiality, the 571 m2 cafe is a contemporary reiteration of the original villa building, subtly referencing elements of Soane’s style. The use of reclaimed portland stone, red brick and flint nod to the manor’s entrance archway, being composed of the same materials and referencing elements of style. The frameless rooflight refer to the manor’s restored skylight and coloured glass on the windows echo the conservatory and Soane’s use of amber glass.

Relocation & restoration
Since Soane’s departure, the manor had become “compromised by Victorian accretions and internal alterations,” say the architects. So, in a set of swift manoeuvres, they sought to renew Soane’s original vision.

Firstly, a Victorian infill accommodating a dining room that had been attached to the northern elevation of the building in 1901, plus a mid-19th century extension providing extra bedrooms for members of the Walpole family, were demolished.

In the place of the infill, the architects revealed the original northern facade and rebuilt a colonnade to Soane’s original drawings, creating a covered connection, an open courtyard, and views between the two volumes. This provides more definition to the architectural heritage of the buildings which exhibit “two very different neo-classical styles.” Removing the bedroom extension enabled both a west-facing conservatory overlooking the park and a rooflight on top of the manor to be reinstated as Soane had originally intended them.

Harris stresses Soane’s pioneering use of glass as a construction material, saying: “He had this great glass conservatory on the side of his house 50 years before anyone had even heard about Crystal Palace.”

The client was “understandably nervous” in the earlier phases of the project, so the architects acknowledged that engagement with stakeholders was key: “Talking about our proposals and hopefully getting them to support us.” Harris continues: “The main challenge was that it was Grade 1 Listed. Only 4 per cent of buildings have that status, so in terms of quality it’s right up there.”

Portland stone for the refurbishment of some of the manor’s stone columns, reclaimed brick matching the original yellow of the facades, and new lead sheeting for the roof were all sourced to address smaller scuffs and issues related to external wear, while reclaimed floorboards were placed internally.

When it came to the interiors, before Jestico + Whiles started work, “It was all painted magnolia. It could’ve been any local authority building,” commented the architects. They took advantage of the tremendous archive of work held in the Sir John Soane museum, which consisted of 250 drawings and watercolours he completed of the exterior and interior of the Manor. “We used these as a references to restore the interior to exactly how he had left it.”

Soane’s original intricate paint schemes, which were overpainted in the 1830s, have been meticulously recreated throughout the Manor following detailed historic paint analysis by interior decoration specialists Hare & Humphreys. Supported by their research, spectrometry technology allowed the architects to “peel back every layer of paint from the last 250 years right down to the base layers, and find actual examples of the paint that Soane had used.” From here, the architects could gauge precisely what colours had to be used to bring Soane’s original work back to life and, realise the brief.

“Some of the rooms are stunning by virtue of their spatial arrangement, but also by virtue of their decoration,” says Harris. Relatively cost effective techniques like marbling and other decorative paint effects (combined with hand-painted Chinese wallpaper in the drawing room – which took six months to create) all imbue the manor with a vivid sense of grandeur.

Look, think, feel
Before commencing work on the master plan, Jestico + Whiles worked closely with landscape architects J & L Gibbons to demolish certain elements of the gardens and salvage views over the park. “There was an old toilet block, an old cafe shed, and certain trees that we felt obstructed the historic vista,” says Harris, “so we removed those and restored the regency landscaping.” Entering the house’s gardens and immediate surroundings, the design team continued the regency themed planting, and reinstated the vehicle suite in the forecourt area using period-style gravel to replace the municipal tarmac that had been applied over the years.

Within the 1939 Public Library building which almost doubles the original manor’s footprint, the scheme now houses 225 square metres of gallery space. Three bays of ornamental glass lay-lights flood light into the main gallery, and clerestory windows serve as a reminder of the building’s former use.

The gallery will present three exhibitions a year of work by artists, designers and architects, each offering a new perspective on Soane’s ideas and architecture. In the first of these exhibitions, Anish Kapoor presented a series of sculptures echoing Soane’s sophisticated use of mirrors and light to amplify as well as dissolve space. Harris comments on Soane’s use of translucent and reflective materials: “He wasn’t afraid to use large expanses of glass. There were things he did at Pitzhanger that he did on other projects; mirrors, for example.”

The architect notes how the client was keen to have a small space for nationally renowned pieces of art, so it was crucial that the ambient and security qualities of the gallery areas matched these intentions in design terms. As part of the Government indemnity scheme for such key cultural projects, the right environmental conditions, such as humidity, UV and temperature are preconditions to borrowing and exhibiting the most treasured pieces.

As well as a large, flexible naturally-ventilated gallery space, there’s a smaller controlled ‘Grade-A’ gallery space with track lighting installed; all of the walls are lined with a construction that makes it easier to hang artwork and fix other installations to the wall. The entrance to the gallery connects, via a new staircase and lift, to visitor toilets, an exhibition preparation room and plant room on the lower-ground floor. From here leads the accessible route into the manor, via a covered colonnade link through the recreated Soane courtyard.

Up & running
“We completed in summer 2018 and the building opened this spring, which gave us a useful period of familiarisation and preparation for the opening,” says Harris. “A few niggles had to be worked out with the contractors, but nothing serious.”

As a measure of success for the client, Pitzhanger now attracts word-renowned artists and is welcoming numbers of visitors in excess of what it had anticipated prior to restoration. Based on current rates, some 70,000-100,000 visitors will visit the new Pitzhanger Manor and Gallery per year, a hefty increase on the 35,000 preceding the restoration. This is just part of why Jestico + Whiles, and the rest of the design team, can rightly consider this a success. 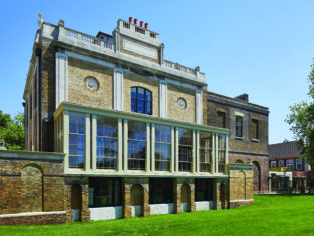 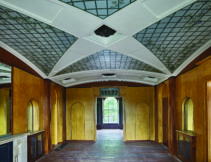 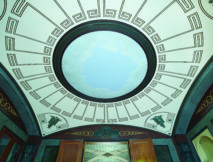 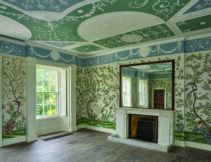