Magnusson Architecture and Planning (MAP) announces the firm’s recognition by the American Institute of Architects (AIA) as a leading firm in architectural excellence in New York City, State, and the Tri-State region. For their projects, St. Augustine Terrace and MLK Plaza, the firm has been awarded three AIA awards in the last six months, including the 2020 AIANY Design Awards, AIA New York State Design Award, and the AIA Tri-State Architectural Excellence Design Award

The AIA announced St. Augustine Terrace as a recipient of a 2020 AIANY Design Award at the Design Awards Jury Symposium on January 13th, at the Centre for Architecture in New York City.

St. Augustine Terrace was also selected as a winning project in the Multi-Family category, by the 2019 AIA New York State Design Awards jury. The development was one of 25 projects selected by the jury out of nearly 300 submissions. The award celebrated local, national and international projects that achieve architectural excellence designed by architects throughout New York that have contributed significantly to the profession of architecture.

“The interior open plan is flooded with natural light and panoramic views to the community,” commented the Jury.

Built on the site of a former Bronx church, St. Augustine Terrace was inspired by the notion that a house of worship is a beacon of light in its community. The mid-rise building provides 112 units of affordable housing for low-income families in the Bronx. From that idea came 13 floors of large, fully glazed elevator lobbies which provide spectacular views by day and then become a glowing tower by night. Churches increasingly are engaging with the issue of affordable housing as an extension of their mission to help those in need. The project is a visual representation of the client’s mission relating to hope and community, as well as a model for what affordable housing can be.

In October 2019, MAP’s design for their project MLK Plaza was awarded the Tri-State Architectural Excellence in Design Bronze Award, in the Multi-Family Residential Design category.

The Jury wrote, “The project introduced a strong new profile to the urban skyline that optimised new zoning regulations to accommodate significant density and affordability in this new housing development. With a tight budget, the project’s mastery of a restrained material palette was also noted by AIA.

Located in the Mott Haven section of the Bronx, the 13-story, 167-unit affordable residential building was one of the first developments to use the new Zoning for Quality Affordability regulation, which allowed for a rezoning of the property from manufacturing to residential. Completed in March 2019, the block-long development includes twenty-five (25) studios, fifty-seven (57) one-bedrooms, sixty (60) two-bedrooms, and twenty-four (24) three-bedroom units. The project offers a prime example of how New York City used rezoning to foster the development of affordable housing—in this case for moderate-, low- and very low-income renters (including 33 units set aside for formerly homeless households) – within a high-quality building. 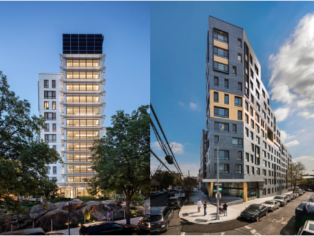