Two years after it set foot in the Middle East & North Africa (MENA) with a Dubai studio, Hong Kong-based global architecture practice LWK + PARTNERS launched its second studio in the region. The LWK + PARTNERS Riyadh studio, which began operations last week, is the firm’s 12th office in the world as it continues to expand its global footprint.

Since the inception of its Dubai studio as the MENA regional headquarters in 2018, LWK + PARTNERS has been collaborating with noted private developers as well as governmental organisations in the region to build a diversity of inspiring urban projects, including mixed-use developments, public infrastructure, luxury residences and more.

In Saudi Arabia, the practice has seen a rising demand for its work as levels of investment from within the country and overseas, particularly from China, increase. In fact some of the Dubai studio’s first commissions were for Saudi clients that reached out for new retail typologies and mixed-use environments that seek to challenge perceptions and buck trends.

Working alongside the Public Investment Fund (PIF) of Saudi Arabia, LWK + PARTNERS has contributed to the country’s built environment through masterplanning exercises, framework consulting and digital transformation solutions for major projects, leading to efficient, future-proof deliveries. Upcoming projects will also include a major transportation development and a province-wide masterplan which features a complex programme of initiatives and wide variety of key stakeholders.

The new Riyadh studio will be led by Kerem Cengiz, LWK + PARTNERS Managing Director – MENA, and Usama Aziz, a new Director. Despite the current global challenges, the practice is confident that time is right to expand and strengthen strategic strongholds in the quick transforming MENA region.

“We’ve always had the intent to ‘go-out’ while staying actively engaged in key markets,” said Kerem, “We have forward-looking imagination parallelled by dynamic corporate governance with a strong management team.”

As Saudi Arabia refocuses its national economy with Vision 2030 to reframe the country as a regional and international powerhouse of education, arts and culture, tourism and commerce, LWK + PARTNERS Riyadh team sees real potential in the market and looks to bring in global insights together with diverse project experience to make cities a better place for people. It aims to shore up Vision 2030 through urban planning exercises, transportation projects and diverse urban solutions responding to the needs of evolving cities.

According to the World Architecture 100 2020 report, LWK + PARTNERS is the 36th largest architectural practice in the world, offering multidisciplinary services across the globe. In the 34 years since it was founded, the practice has earned extensive experience and well-deserved reputation in China, and is known for its early adoption of building information modelling (BIM) technologies. While gradually expanding its business in Asia and beyond, it has acquired strategic partnerships, including a long-term partnership with isBIM Limited, a sister company under the same mother group C Cheng Holdings Limited.

LWK + PARTNERS is still growing internationally. In Southeast Asia, the firm decided to scale up regional presence by opening a Singapore studio last year, working alongside with its Manila office to seize opportunities in a region of dynamic growth and increasing influence.

As Saudi Arabia, the GCC region’s biggest construction market, continues to thrive, the new Riyadh office will ride on the firm’s existing client networks and partnerships as well as international experience to bring quality urban landscapes to life. 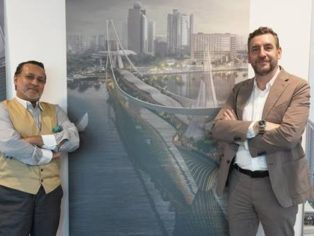