LWK & Partners (HK) Ltd is glad to announce that the Company has won a design competition held by Sun Hung Kai Properties for their new site in the Kai Tak area. LWK will be the Design and Project Architect for the new development.

“Since the Hong Kong International Airport has been moved to Chek Lap Kok in 1998, the industry and the general public has been anticipating Kai Tak’s transcendence into its next phase. We are very proud to not only witness, but also play a major part in its transformation from ‘a place of transit’ back to ‘home’.”

Located in Kai Tak, Southeast Kowloon, the project has a site area of approximately 16,556 sq m. The current scheme comprises residential towers, a retail podium, and other auxiliary welfare amenities. The retail podium will be connected to the future Kai Tak MTR Station on the Shatin to Central Link and its adjacent sites, providing easy access for residents and visitors alike. Its premium location foretells the project’s tremendous potential to become one of the most successful developments in the area.

The conversion of the former international airport to a new residential hub in Southeast Kowloon calls for particular consideration on creating a lifestyle for users to dwell and enjoy, over what was merely a transitioning, passing space.

As a comprehensive residential-retail mixed-use project, it stands as a sound example of the Company’s all-rounded capabilities as LWK’s professional experts were pulled from different teams to join hands and work on the project together, including the Company’s in-house research team, the residential team, and the retail and commercial team.

Prior to working on this project, LWK has also worked on multiple sites in the Kai Tak area. The Company’s first Kai Tak project, One Kai Tak by China Overseas, was the first private residence that was put up for sale in the area and the first site developed under the ‘Hong Kong property for Hong Kong residents’ policy. LWK was the Design Architect, Project Architect and Executive Interior Designer for the project, which consists of four high-rise residential towers and 13 low-rise houses, as well as a retail precinct that includes a covered walkway. Apart from previous feasibility studies conducted for 11 sites out of the total 13 private residential sites in the area, the Company is currently involved in two other on-going projects in Kai Tak, including one for Wheelock Property, and one for the joint venture of KWG Property and Longfor Property. 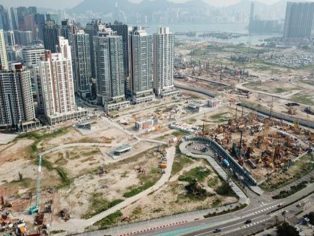