The project team behind the design of the new cruise liner terminal in Liverpool are excited to see the latest designs revealed, which include a 90 second fly-through video. An outline planning permission was granted for the scheme in April and the city council has applied through Mersey Docks and Harbour Company for a Harbour Revision Order for the construction of the Jetty in the River Mersey.

The new cruise terminal is being built within the Liverpool Waters area and includes a state of the art passenger and baggage facility, complete with security checking and customs areas, lounge, café, toilets, taxi rank, vehicle pick up point, car park and four-star hotel. It is expected to directly create more than 500 new jobs. The detailed design is being progressed with a view to submit a reserved matters planning application in November.

“Ramboll is delighted to have reached the stage on the new Liverpool Cruise Terminal where we can release the latest images and fly-through of the new terminal. This is a major regeneration project for Liverpool City Council and their partners that will play an important role in growing Liverpool’s tourist numbers. Our team, including architect sub consultants Stride Treglown, and major sub-consultants JLL and Turner & Townsend, are looking forward to seeing the scheme through its construction stage and into operation and accepting ships.”

“The Liverpool Cruise Terminal is a new gateway to a beautiful city, loved the world over. We have acknowledged the historic setting, whilst also looking to the future, and reflected the excitement of travel in our architecture. We designed the new terminal to be open and outward-looking. Expansive glass walls frame far-reaching views across the city and out to the Irish Sea, and a zinc skin will shimmer with tones of the River Mersey. A concrete plinth, upon which the building sits, is a modern interpretation of the old dock walls.”

“The construction of this new terminal will mark a new chapter in the city’s maritime future as we create a world class experience for the cruise companies and their passengers. We are working with some of the very best in the construction industry to deliver these facilities as the stunning video shows.”

Revealing the latest designs for the cruise terminal follows consultation events to support the pre-planning application for the new four-star hotel on the new cruise terminal site, with Wates appointed to construct the hotel.

“The new cruise liner terminal is a key element in plans to further boost our flourishing visitor economy, which is now worth more than £4.5bn a year to the city region’s economy and provides more than 53,000 jobs. Attracting more visitors, in bigger ships, will give a boost not just to businesses in the city centre, but around the city region, indirectly creating additional jobs for local people across the supply chain. The video brings the plans to life and helps demonstrate how much closer this project is to becoming a reality.”

Site preparation works for the new facilities are expected to start in the new year, subject to approval of the Harbour Revision Order. 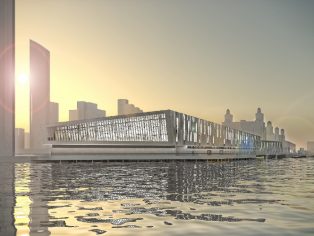