As part of a new “air transport-related economic zone”, the project brief calls for the purposeful design of a new generation of workspaces, with integrated retail, dining and entertainment offerings. Daxing International Airport will create a new commercial environment for aviation companies, as well as catering to the needs of the 100 million travelers expected to pass through annually.

Lead 8 was awarded the project based on their innovative design strategy on hybrid workspaces, and a proven track-record in aviation designs. Under the challenging site conditions, Lead 8 adopted a creative and inspiring approach in handling of the spaces, while working in collaboration with the operators.

“The new aeropolis is a glimpse into the shape of the cities of the future. Our future workspaces are being influenced by the changing lifestyles of a new generation, as work, entertainment and hospitality blurs the boundaries to create new opportunities.”

“We hope this scheme will inspire future airport developments, as there is a growing demand for quality workspaces with integrated natural environments, particularly in Beijing.”

Lead 8 has been making its mark in the aviation space in recent years as it redefines creativity in the sector. Several other airport authorities from across the region have approached the firm as they look to enhance and innovate their offerings, and to maintain competitiveness. 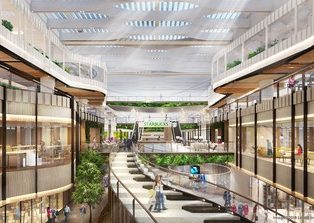 Maximising natural daylighting and indoor greenery Into the hybrid workspaces create a pleasant, vibrant and intimate environment for travellers and coworkers. © PRNewsfoto/Lead 8

An integrated workspace with retail and hospitality makes it very convenient for travellers to commute between buildings within the terminal as the airport aims to strengthen itself as a commercial hub in the new district. (PRNewsfoto/Lead 8)