Is it refurb or rebuild?

The Bartlett School of Architecture will move into its new 22 Gordon Street building this autumn, but its predecessor home will be lurking within, explains Mark Smulian.

How radically can a building be altered before it crosses the boundary from refurbishment to new build?

That question may be debated by architects for years to come as The Bartlett School of Architecture’s new premises takes shape in the 22 Gordon Street (formerly Wates House) project in Bloomsbury, central London.

The concrete frame and floor slab of the original building remain, but that is all. From its scheduled opening this autumn, the Bartlett will have in effect a new building following a £20 million refurbishment of 22 Gordon Street.

The building, dated from the mid-1970s and while not life expired, had ceased to provide suitable spaces for the growing student numbers.

Building an entirely new school somewhere else was an idea entertained but rapidly discarded as the Bartlett School of Architecture is part of University College London (UCL) and needed both to be near the rest of the institution and also to retain its central London location close to concentrations of architectural and consulting engineers’ practices.

Its site though brought its own constraints. 22 Gordon Street is at the boundary of two very different conservation areas. To the west are large early 20th century buildings and to the east smaller 19th century and late Georgian ones and the London Borough of Camden’s planners wanted something that would sit well with both but also have some gravitas in an area filled with imposing buildings.

For architect Hawkins\Brown there was the challenge not only of designing something suitable within these constraints but also it would be working for an architects’ school where every member of staff is paid to have and express opinions on architecture. A demanding client indeed.

Senior lecturer Mark Smout, who has acted as a link between architecture staff and the project team, explains the problems to be overcome.

“Originally this was going to be a demolition and rebuild but we decided after talking to Hawkins\Brown that the amount of embedded energy in the existing concrete made it silly to demolish that and replace it with essentially the same thing, so we opted for a refurbishment that involved taking the building back to its core,” he says.

“Something needed to be done because this is the highest ranked architecture school in the UK but it didn’t look like that. There were leaking windows and occasional floods and it looked poor for open days or when prospective students came.

“We’d become a victim of our own success with more and more students wanting to come here and not having the space needed.”

Mr Smout says areas in which students present work were small and had been subdivided for other purposes, while the building lacked a gallery and adequate breakout and exhibition space.

Hawkins\Brown partner Euan Macdonald says that once refurbishment and expansion was chosen the question arose of how to use the space better.

An additional sixth floor has been added and the building’s perimeter extended by 1.5m to in all add over 3,000 square metres of space to the 5,500 that Wates House originally had.

A library and the Bartlett School of Planning, formerly in the building, have moved elsewhere giving the architectural school an additional 3,500 square meters of usable space and primary use of its new home.

Issues emerged with the capacity of the original frame though, with a structural engineer advising it would be difficult to get the original substructure and superstructure to take much extra loading.

The solution was to use a special brick imported from Germany which is lighter than normal by being 75mm rather than 100mm, this also helped to meet the planners’ requirement for a ‘heavy’ looking building with ‘gravitas’ despite the lighter materials being used, Mr Macdonald says.

By locating a gallery and exhibitions space on the ground floor the design is also intended to open up 22 Gordon Street to the world in way that Wates House had not been.

“The concrete frame is still there and the new part of the building is concrete and steel linked to the original frame, with steel extensions to upper floors and five steel columns inserted to create a double height gallery and support the existing building above. It is effectively a new building.”

Wates House was hard to navigate, he says, with its staircases strangely located and “we have changed that so that when you come in there is a double height reception area and the staircase and lifts are in front of you,” he says.

“It makes the building easier to navigate and the new building is arranged so that large lecture and seminar rooms and administration are on the ground and first floors and floors two-to-six are spaces for students to work in together with staff offices large enough for small meetings.”

The basement accommodates workshop activity, offering space for making with natural light. Some mechanical and electrical plant is housed here, though the bulk of it is on the roof.

On the second to sixth floors spaces are designed for up to 20 students to work on projects, with partitions between these easily demountable if necessary.

Generally, staff are to the south of the building and students to the north with the staff rooms large enough to be used by two academics and still offer room for small meetings or workspaces.

Each of these student ‘bays’ is open to circulation routes above which services are exposed for ease of access.

“This was a serious challenge with the relatively low floor to ceiling height,” Mr Macdonald says.

To reduce energy consumption and CO2 emissions, the building is connected to the university’s district heating system.

It additionally uses a photovoltaic array on its roof, and an intelligent building management system monitors energy to minimise its use. There are also
water-efficient appliances.

The design had to be mindful not only of the Higher Education Funding Council for England’s carbon reduction target of 43 per cent by 2020 against a 2005 baseline, but also the requirement of central London planning policy for a 35 per cent reduction in carbon dioxide emissions above those of Part L 2013 of the Building Regulations for refurbishments of more than 1,000 square metres.

Once the refurbishment option was chosen, the question arose of how the school would function during the project. It had originally been intended that work would take place around the staff and students, who would stay as it morphed from Wates House into 22 Gordon Street.

This idea was dropped when it became obvious that the scale of the work would be such as to make teaching and research impossible around it, and so a temporary home became needed, which proved to be an architectural project in its own right.

“While it was being built we had to decant the school, so we found a disused warehouse not far away to adapt for that. It was a shell and needed a lot of M&E work.”

The design of the temporary building has though helped with the transition in the way staff use space, Mr Smout says.

“The temporary building, being a large open space rather than small offices, has opened up the way we work together ready for the new building,” he notes.

The Bartlett School of Architecture is growing, Mr Smout says, with its present 750-800 student total likely to soon exceed 1,000. At present just over 500 are studying for Royal Institute of British Architects Part 1 or Part 2 qualifications and the rest are taking a PhD or one year master’s degree course, the latter an area that is particularly expected to grow.

In all, at present, there is almost double the number of occupants in the school for whom Wates House was originally designed.

At the time of decision to refurbish Wates House the Bartlett’s Dean, Professor Alan Penn, said:

“Retaining the existing structure not only saves embodied energy, but adds a certain quirkiness to the design.”

As students arrive at 22 Gordon Street for the 2016-17 academic year they will be able to use a building designed for modern needs in teaching architecture, in which the visible remaining parts of the original structure have, perhaps quirkily, been left looking intentionally somewhat ‘distressed’ and different from the new structures.

How many will realise that the ghost of Wates House lurks around them as they work in what will give every appearance of being a new building, yet which is not? 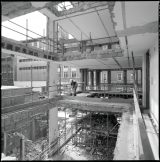 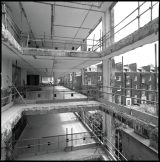 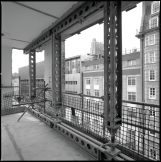 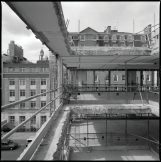 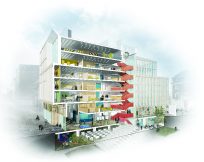 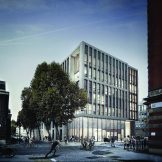