How to avoid a war over water

Every cloud has a silver lining and if there was ever a positive to come out of Covid it is a greater appreciation of what clouds bring us – rainwater.

Research conducted during the pandemic has shown a more genuine regret for the impact we are having on the environment, some of which has been evidenced by the clearer skies and lower pollution levels caused by the massive drop in air travel and industrial activities.

This greater respect for the environment has seen sales of rainwater harvesting systems hit new heights during the lockdown months of April and May. Some manufacturers have reported 100% increases in consumer sales of above-ground systems such as water butts (which capture about 500 litres of water) and 50% increases in below-ground pumped systems, for the garden only as well as for the garden and house, which can easily filter and store up to 10,000 litres.

At the same time, environmentally conscious developers of high-end properties particularly are starting to design and build rainwater harvesting systems into their portfolios from scratch. The new-build option further reduces the very attractive supply and installation costs.

Far-sighted manufacturers believe that designing rainwater harvesting systems into all new-builds, regardless of whether they are domestic or commercial, should be mandatory, even in the UK – a country with relatively high rainfall  (100mm/month compared to areas of South America and the African continent at 400mm and 1mm respectively).

This would also help to relieve the burden on water utility companies which are already struggling with demand and the cost and inconvenience of repairing leaking water pipes which do not differentiate between drinking/potable water and grey/non potable water.

In the UK, up to 50% of the 150 litres’ daily usage for the average person excluding garden irrigation could be saved if they used harvested rainwater to flush their toilets and clean their clothes. This is in comparison to the extremes – the US which uses a massive 580l/day and Mozambique which uses a mere 10l/day.

At a time when the price of drinking water has increased by 500% over the past couple of decades, this could save up to 50% on a water bill. If people also used recycled rainwater to water the garden and plants, they could save 60l/m2 per year of potable water. Commercial properties could save up to 85% on their bills.

We are somewhat protected in the UK from the horrendous lack and poor quality of drinking water that some areas of the world suffer. And this has made us complacent, unlike the people in developing countries who spend 200 million hours/day collecting water and the two million children killed every year by contaminated water.

As well as being environmentally sound, rainwater harvesting conserves ground water resources, reduces demand on potable water supply and mains water consumption in areas where water is scarce as well as the energy consumption needed for the purification of drinking water, and contributes towards flood prevention and stormwater management.

And the days of water butts featuring function but no form are long gone. Almost 50 years of experience has led to contemporary, discreet designs made from recycled materials that even the fussiest property owner would be proud to have in their garden.

Collecting and dispersing water has always been a matter of life and death for humans. In our informative years we must have cupped water from rivers, springs and waterfalls while traversing wild landscapes following herding animals and shoaling fish. The use of cisterns to store rainwater can be traced as far back as the Neolithic Age.

It was the dawn of farming that brought about innovations in capturing and storing rainwater and using it to irrigate crops but modern urbanisation over the past 500 years has greatly distanced most of us from the strains of water harvesting.

Many people have likened the Covid crisis to a war. With just 0.4% of the planet’s fresh water being available for 7 billion people, rainwater harvesting champions are unhappily convinced the next war will be about water.

*Source: Priv. Doz. Dr. Reinhard Holländer, Bremen, Germany: http://www.platzregen.info/bakterien.html
**The report covers above and below ground systems as used in residential and commercial, as well as agriculture and industrial applications, in recent significant developments by leading vendors including the Graf Group. 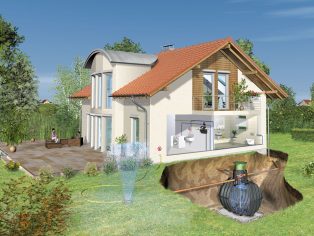