Integra House is a new home built for a client that’s also the product of a research project at Robert Gordon University to improve provision of energy efficient, sustainable, healthy and genuinely affordable housing. Prefabricated truss construction used for the entire house construction is claimed to be a potential way to not only eliminate fuel poverty, but also address capital and life cycle costs and indoor air quality, in a fully repeatable model. “The client specified a budget for a two to three bedroom house, and she wanted it to be environmentally friendly,” so says Gokay Deveci – professor at the university and the designer behind the pioneering, all-timber house. The architect has made a name for himself over recent decades for his contributions to affordable eco-housing, of which Integra represents one of his latest iterations. Excluding the foundations, the project’s budget was set at £140,000 – around £1,000 per square metre – posing tight financial constraints to an already isolated plot which was challenged further by the often aggressive Scottish weather. Deveci continues: “The client came from a granite cottage before and was very concerned about the running costs. So, I had a very limited amount of money to build a new house that was also energy efficient.” The slightly sloping rural site, located in Tyrie, near Fraserburgh, Aberdeenshire, consisted of a farm building and derelict sheds, served by single-track access. Early proposals made attempts to integrate a house inside one of these pre-existing buildings. “There were some existing stone walls,” says Deveci, “but their structural conditions were so bad I had to abandon that.” Regarding planning, Deveci notes that the project received encouragement from planners: “They were comfortable with us being a little experimental.” Given these circumstances, a saving grace for the architect was that the client had no particular fixed idea in terms of the architectural identity of the new building. So, partnered with the generous size of the site, the design was allowed more space to breathe in certain areas. Unknown at the time of the brief, these parameters would serve as a platform for innovation in affordable green living.

In plan, Integra house is long, simple and rectangular – roughly 18.2 metres by 7 metres – for practical structural reasons, as Deveci explains: “It’s to do with the gable ends and the way the roof trusses stand side by side.” It’s an extremely windy site and as a result the building gables were located facing the prevailing wind. The building is almost as simple in form as in plan, featuring a pitched roof which combines 60 degree and 25 degree angles, serving to displace the roof’s peak to the eastern side of the house’s mass: “It came entirely from the materials, the structure, and the way that things were put together.” The entire structure, skin and insulation is comprised of timber. The architect explains that a flat roof was considered early in the design process due to it being cheaper, however because of the climate and conditions it would have needed a specialist sub-contractor: “Different trades always add to cost of ‘affordable’ housing,” he says. Externally, the geometric form of Integra house is complemented by a near-monotone specification of material for the external envelope – the building being almost entirely shrouded in larch strips, interrupted only by the glazing and dark steel frames holding them in place. The house sits on a timber platform, providing a sort of terrace which wraps around its periphery. Internally, the building houses two floors: The ground level covering the entire expanse of the plan – except for some intrusions at both ends of the building; and the first floor houses three-metres-wide ‘attic’ space extending along the total length of the building. At ground level, the southern side of the scheme houses a open-plan kitchen and living area, a utility room and concealed storage space, while at the northern side two bedrooms and a bathroom are situated. When entering the building through the main entrance situated on the house’s western elevation, the user enters a hallway which provides access to these two wings, as well as a generous staircase leading up to the first floor attic space. This houses a bedroom plus WC, a modest study, and further storage areas towards the northern side, while a void on the southern side turns the living area below into a double-height space, while providing the client with the flexibility to add a fourth bedroom later on if desired.

The innovation that Integra House champions has to do with its structure. “Standard normal timber frame become so expensive due to energy efficiency and airtightness requirements,” says Deveci, adding, “I could afford much more roof truss.” The architect says he “interrogated himself” on why a robust, laser-cut product using good quality structural timber like a roof truss couldn’t be used for the walls, floors and the roof. So, by using off-the-shelf roof trusses and having them extend to these areas to construct the building’s superstructure the design produced significant cost savings of around £20,000-30,000, and reduced construction time considerably. Integra House took nine months in total to build; three months longer than anticipated because there was no main contractor. Instead, a separate contractor was used for the groundworks, another for the joinery, and Deveci got hands-on, doing the plumbing and electricity himself. “Workmanship was difficult, and a bit more time-intensive,” Deveci admits. In addition to specifying budgetary constraints, the client was, says Deveci, “very involved.” Weekly meetings were arranged over coffee to which “she would always bring a magazine and try to hint that there were certain aspects that she liked and didn’t like.” The architect compiled a wish-list of features which included a wood-burning stove and far-reaching views from the kitchen and living area over the Aberdeenshire countryside. In order to retain the monolithic aesthetic of the building provided by the timber cladding, Deveci also specified a drainage system whereby rainwater flows through the timber cladding on the roof via thin slits, down a corrugated iron roof beneath and into a hidden gutter. “I didn’t want a plastic or metal gutter; it would have been a much less elegant solution.” There were already agricultural sheds and stables around the site, and the ageing of the materials plus the shape of the plan make the house look “almost agricultural in nature,” says Deveci, “particularly to the north of the scheme, where there are very few openings in the house’s external envelope.” In terms of acoustics, Integra House is well-suited to the building’s intended function. “My client is single – if there were others in the house then there may have been some challenges.” According to the architect, the double height spaces tend to create some constraints when it comes to acoustic performance: “It’s best to have some kind of mass in an all timber-framed house.” The internal organisation of the building was impacted by the gable ends in that first floor space was particularly tight due to truss wind load calculations, and there was also a need to be conscious of the direction of the stairs leading up to the attic space, which had to run parallel to the trusses.

The truss is made from standard structural grade soft wood, the external cladding is 45 mm thick Siberian larch “which does not require external treatment,” and the insulation is partly wood fibre. which is, according to Deveci, recycled and more breathable compared to other alternatives. “It’s a good example of how architects can build using sustainable and future recyclable materials as well as addressing circularity.” The architect says: “The project is ageing nicely, taking a greyish colour which fits with the existing roofs and structures in that part of the world.” Deveci continues, discussing how the material benefits the environmental and wellbeing qualities of the spaces within: “considering health, using healthy materials is important since our buildings are becoming more and more air-tight.” He also notes that “low energy housing solutions, in particular the affordable housing sector, often have their ventilation switched off, which can lead to long term health problems.” Given all these features, the house almost reaches Passivhaus standards – “in terms of insulation, it’s better than Passivhaus,” says Deveci. The only aspect that didn’t meet Passivhaus was airtightness, which was partly deliberate for the research aspect; it is rare for affordable housing to incorporate the mechanical ventilation systems that would be required to offset extreme airtightness, due to their cost (minimum £4K, according to Deveci). Instead, the architect designed a bespoke ventilation system which extracts the air from the living room – heated by the woodburning stove – and redistributes it through diffusion into the bedrooms in the north of the plan, or vice-versa. When quizzed on what could’ve been added to further improve the thermal performance of the house, Deveci notes that he would’ve liked to use a concrete foundation to make use of ground-stored heat, however, the environmental and budgetary constraints meant that this wasn’t feasible. Aside from the ecological sustainability benefits that Integra House provides to the client, for Deveci, the real sustainability is economic: “Affordability is so often only seen in terms of capital costs, and not running costs,” explains Deveci. Integra House incorporates both of these, achieved by using a simple, yet elegant solution. “I think what I demonstrated is that custom and self-build doesn’t need to be one-off or expensive. They can be very cost effective and meet the construction standards. There’s no need to make sacrifices. If it’s not affordable it’s not repeatable!” In the midst of a housing crisis, a strong case can be made for Integra House as more than a singular example of a passing fad for affordable eco-housing in rural areas. The truss-based system makes it a cool contender among the many solutions being proposed in efforts to ramp up housing production and meet both customer demand and Government targets. While Deveci insists “it’s not just a numbers game,” the house’s simplicity makes it easy to build, easy to maintain – maintenance need not be carried out by specialist contractors, making it especially apt for rural and remote areas and the self build market – and easily customisable, since a wide array of materials can be applied to it to the preference of the client or user. Also, often overlooked in debates over housing in the United Kingdom is the cultural component – with architectural language being a reflection of cultures, morphing over time and space, and over and within borders. “Should the houses in the north of Scotland be the same as those in the south of England?” asks Deveci rhetorically, before answering: “I don’t think they should.” It makes sense, then, to seriously consider solutions that can be easily tailored to local character and identity. When the solution can be constructed with such ease, giving access to self-builders and smaller housebuilders, an even more enticing answer to the challenges materialises. 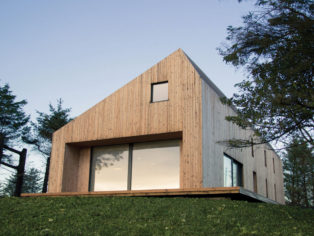 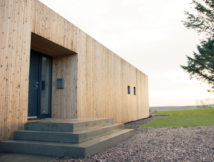 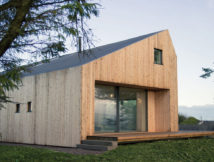 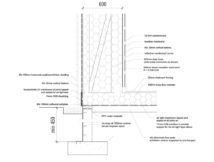