An ambitious technology-driven project is underway which sees architects collaborating with the materials sector to find a ‘transparent’ answer to the housing supply dilemma. Sébastien Reed reports

The Carbon-Free Group (CFG) was founded in 2007 as a critical response to inefficiencies in current processes of innovation in the design of housing. Anthony Morgan, the group’s co-founder, explains the challenge posed to innovation in the industry: “One of the problems with any innovation is that it has to take place in a very siloed environment.” A key issue is that due to how intellectual property works, innovators don’t have the ability to go out and look for applications, or bolt on other technologies to improve an idea.

According to modular panels manufacturer and CFG partner, Tufeco, the construction industry presents particular problems which the firm hopes the CFG can overcome in attempting to innovate a new approach: “The industry often tackles build problems and mandatory improvements by adding layers to existing systems, rather than looking for a whole, encompassing solution.”

CFG has been set up to research and develop a more holistic approach to modular housing. It has created a framework whose purpose is to incubate individuals who are developing new ideas, while maintaining a collaborative approach to innovation.

One of the fruits of this is Atelio, a housing concept developed collaboratively by architects Grimshaw, SAM Architects and Tufeco, who have devised a profoundly thought-through vehicle that harnesses a range of technologies to produce a model of future-proof and zero-carbon modular housing.

At the heart of Atelio is Tufeco’s panellised system, made of a reconstituted glass composite and boasting impressive
properties. Originally developed for hurricane-proof housing, it is watertight, almost 100 per cent hermetic, and extremely thermally resistant, as Morgan explains: “the most closely akin technology is the re-entry shield of a space shuttle. Outside temperatures can be 16-18 hundred degrees, it’s 21 degrees inside, and there’s just 55 mm of material in between.” Unlike traditional insulating materials, the ceramic GRP technology used to encapsulate the panel works to reflect and expel heat rather than slow its transfer.

The 1.2 metre wide panels are manufactured on a fully-automated linear production line from a glass ‘porridge mix’, which is sandwiched between layers of GRP before being kiln-fired. The

resulting sheets are then cut to specification within as little as three hours, delivered, and assembled onsite. “From point of order to watertight building, it’s effectively two weeks,” says Morgan.

Unlike volumetric concepts, Atelio arrives on site flat-packed, avoiding the cost of ‘shipping air’ from A to B. Construction can be undertaken by just three people, the highest-skilled being a spider crane operator. Two “kickers” place the panels by hand, allowing for a construction time of as little as 48 hours for a three bedroom home.

Grimshaw added considerable value to the project by applying the practice’s BIM expertise, as Paolo Vimercati, Grimshaw associate principal explains: “We are developing BIM elements to enable a clear design-to-production process. This is a parallel work stream we are investigating as research and development in collaboration with Tufeco and the rest of the team.”

The architects have also identified a number of typological needs for potential clients and developed housing models as base design templates. In masterplanning test sites, it has placed strong focus on social and environmental considerations. Vimercati explains: “The Atelio vision empowers a new way of community living, and our methodology reflects a fresh approach to earth-friendly living.
We have developed a landscape-driven planning concept that encourages a community spirit through engagement with the environment.”

Melanie Schubert, partner at SAM Architects, who have designed smaller residential buildings within the project, outlines its design concept: “The houses and apartments focus on natural daylight with large floor to ceiling windows, rooms with dual aspect focused on a connection to nature.”

The first Atelio typologies resulted in small apartment buildings (consisting of twelve one and two bed units) and four independent houses (two bed over one level, two bed over three levels, three bed over two levels, four bed over two levels). Following those, the architects have been developing semi detached and terraced typologies to ensure a wider offering into the market and engage with issues of density in peri-urban sites.

Atelio’s pro-collective ethos is stressed by all parties involved, with Morgan describing CFG as a ‘community-first’ organisation. The buying experience is client-driven, and he draws parallels with buying a new car: “If you want to buy a car, you go and choose your model, in red, with leather upholstery, effectively that’s what we’re going here.”

Housing typologies can be expanded and retracted to give way for extra interior space, balconies, terraces, or more outdoor space. Windows and doors can be placed at the discretion of the end-user, with Grimshaw’s BIM model checking for any potential design clashes. Local planning restrictions are also built into the model, saving legal hassle and further minimising build times.
Accounting for the constraints placed by the British climate on year-round energy generation, smaller buildings can make use of photovoltaics and battery storage to meet their energy demands. Larger buildings, on the other hand, can make use of inter-seasonal thermal storage. Energy is taken from the photovoltaics and pumped into the ground during the summer months, ‘charging the ground with thermal energy’, which is ready to be recovered with a heat pump in the winter months.

In the spirit of zero-carbon, Morgan also sheds light on possible mechanisms of community energy management. CFG are working on the development of a peer-to-peer energy trading

platform allowing people with excess energy to sell that energy directly to their next-door neighbour and vice-versa. Addressing recent Government policy initiatives, Morgan says: “It’s all very well the Government saying we need another two million houses but actually, these are predominantly going to be electrically driven, what’s the impact on the national grid? This addresses those issues.”

When questioned on the longevity of the technology, given fast moving developments in energy management, Morgan responds: “We’re thinking about that too.” Atelio features a central utilities core – an ‘energy cabinet’ – designed to be swapped out as and when any technology becomes obsolete. Being made primarily

of glass, the panels are fully recyclable, helping contribute to the circular economy.

Beyond the performance gap

“Typically in the UK, the amount of energy required to run a house post-occupancy is 10 times greater than the original design of the building,” Morgan notes, “building out of materials where they are layered up, there’s an inherent issue in the way that the materials go together.”

The collaboration is also concerned with addressing the performance gap, which is particularly troublesome for the end-users of large house building projects. Atelio combats this by fundamentally compressing the supply chain, as Morgan explains: “It’s a one-stop shop which strips out a lot of the cost.”

He continues: “Traditional D&B contracts are often contractor-led. The primary contractor inevitably has the overall say in the design process. They water down the sustainability credentials of that development and when you actually get to developing and delivering onsite, subcontractors that are taken on don’t necessarily understand what the intention of the original design feature was, and mistakes are made.” By contrast, the Atelio approach is centralised, facilitating full stakeholder engagement, with all parties aligned from day one of the project to create what’s claimed as the “first zero-carbon modular building”.

Despite its nascent nature, Atelio will be available to order in 2018 following construction trials. Despite it being designed to offer zero carbon, the group behind the project claim the delivered cost will be around £136/ft2, in line with a traditional brick and block building – and that cost is expected to decrease. “We’re actually at the most expensive now,” says Morgan. “In order to get the economies of scale in the production line, we need to be delivering 2000 houses a year, at that point there’ll be significant supply chain cost reductions,” making Atelio more competitive than traditional housing.

Criticisms of the project have included questions around panels’ limited scope to facilitate architectural design, but Morgan says that Atelio is fully customisable. Curved panels are a possibility, and exterior finishing options are said to be ‘virtually endless’ for clients.

From a product R&D perspective, Atelio’s resulting proposal is certainly compelling – offering faster and more integrated construction methods resulting in ultra low-energy residences through a process anchored to the end user. And, with the collaboration between architect and manufacturer so central to the project, it consolidates an evolving role for architects. As Vimercati says, “The architectural profession is more and more open to this ‘agency’ approach, and we feel it could gain a lot from it.” 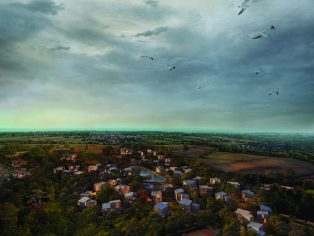 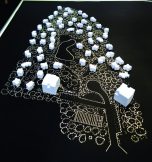