Future Watch – Back to the future

Professor Steve Goodhew of the University of Plymouth reports on the CobBauge project, which is seeking to bring a traditional sustainable building material up to date and into line with thermal Building Regulations

Building using earth in its unfired form is not new. The use of straight edged blocks dates back to 6000 BC, and rounded earth blocks in the Middle East and central Asia to possibly 1,000 – 3,000 years before that. In the UK some buildings made from cob – a local form of earth construction using a mixture of earth, water and fibres like straw and hemp – date back to around the 14th century. In the European Union, cob heritage represents at least 200,000 buildings.

In the UK cob buildings are abundant in the south west of England and can be found between Cornwall and some parts of Hampshire, although they are most numerous in parts of north and mid Devon. The use of cob has the potential to bring substantial reductions in carbon dioxide (CO2) emissions and construction waste compared to conventional masonry materials. While perceived as a building material of the past or for those self-builders that are enthusiastic followers of ‘deeper green’ environmental construction, cob is becoming a logical choice of construction technique in certain parts of the UK and northern France. Its inherent low carbon credentials and ability to act as a buffer to the increasing internal moisture levels in our ever more sealed buildings, while preserving the cultural linkages to thousands of vernacular buildings, make it a sustainable alternative for designers.

A number of architects have used earth in construction. Examples include rammed earth walls at the Eden Project in Cornwall by Grimshaw Architects, and the Centre for Alternative Technology in Wales by Pat Borer and David Lea Architects, yet such application tends to be specified in small sections of their designs, often in a position where the material forms a thematic influence on the building infill rather than an active part of the structure or facade. This is understandable as more clients look for sustainable buildings but still wish to avoid new materials and the perceived risks associated with them.

Yet one of the major limitations to specifying cob is current Building Regulations both in the UK (Part L) and France (RT2012). While there is plenty of evidence that cob buildings are warm in winter and cool in summer, the thermal conductivity of the earthen, fibre composite does not currently comply with the latest U-value prerequisites without using very thick walls or adding insulation.

Our research project CobBauge has now succeeded in bringing this ancient, sustainable building material into line with modern thermal standards. CobBauge is an amalgamation of the English and French words for the material, and the project is a collaboration between researchers at the University of Plymouth and French partners Ecole Supérieure d’ingénieurs des Travaux de la Construction (ESITC), and the University of Caen.

The technique involves two different grades of cob – one lightweight version with greater insulating properties, and one denser, stronger type – that are bonded together to form walls.

Over the past year we have experimented with different mixes based on English and French soil, and come up with one each of the structural type, and one each of the lightweight thermal kind. While what we have come up with is without a doubt a modern interpretation of cob, we hope it will satisfy both the traditionalists and those looking for a high-tech, energy-efficient material. As a result of this research, we can say there is no reason why cob cannot be used to build modern houses that meet the latest standards.

While the focus to date has been on using natural fibres, work is ongoing to determine whether other fibres, such as waste paper, could be used to deliver a viable CobBauge mix.

As the material has been researched from a production point of view as well as from a pure ‘material properties’ perspective, the CobBauge wall will be an easily deployable technology. Limitations tend to be distance from material supply rather than technology – the closer the buildings are constructed to appropriate soils and local fibre suppliers, the more sustainable they will be. Other limitations involve height: new cob buildings of three or more storeys do exist, but currently two storey dwellings are the main focus.

The decision to use cob is one for everyone in the client/designer/ contractor team. It is probably unwise to introduce materials and production methods that are new to a contractor without making the design philosophy clear at tender stage.

The December launch of our CobBauge material saw 100 architects, specialists and industry and local authority representatives hear a series of presentations about the project findings. One of five larger scale demonstration walls was on display, and potential clients and designers could see how the material would be constructed, and the potential of the final product.

The next stage of CobBauge, subject to further EU funding, will see at least two houses built on either side of the Channel. These will be monitored for two heating seasons to benchmark the energy use and general interior air quality, allowing comparisons with other energy efficient dwelling designs/systems.

Dr Jim Carfrae, Lecturer in Environmental Building at the University of Plymouth, explains:

“There is a realisation that modern building materials might have all sorts of negative consequences for inhabitants, making this work particularly timely, and creating a new focus on the use of natural materials like cob.”

Professor Steve Goodhew is associate head at University of Plymouth 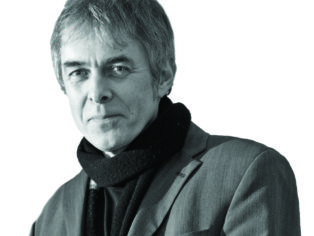 CobBauge partners with a demonstration wall in the new material