The Design Engine scheme for a new Design Technology & Engineering Building at Stowe School has been submitted for planning consent. Stowe School has been based since its founding in 1923 in the historically recognised Stowe House site, formerly the seat of the Dukes of Buckingham and Chandos.

The new building at Stowe will serve as the creative hub to introduce pupils to modern design and manufacturing skills and sit alongside and support the other STEM subjects of science and mathematics. The school strongly believes that Design Technology should be considered a STEM subject offering pupils valuable practical skills as they move from theory to manufacturing. The subject complements the application of knowledge, understanding and skills in mathematics and science, deploying both theory and practice simultaneously. Stowe has established itself as the country’s leading school for Robotics and this new facility will embrace developing technology in mechatronics, Computer Aided Design, Computer Aided Manufacturing, Computer Aided Engineering, 3D printing and other cutting edge technology.

The unique nature of the school campus, sitting within the grounds of Stowe House (and occupying the house itself) demanded a rigorous approach to the setting of the new building.  The initial stages of the project therefore involved an in-depth analysis of the campus as a whole in order to explore all options for the location of the new facility.  The brief asked for a new stand-alone building that would replace the outdated facilities, to house state-of-the-art workshops that would embrace developing thinking in all areas of design, technology and engineering. The proposed two-storey building is sited within woodland, to minimise visual impact and to ensure logical adjacencies with other faculties.

The materiality of the building will contribute greatly to its relationship with its historic architectural and landscape context. Stowe School also wanted to explore how the building could work as an educational tool, expressing how different materials are employed in contemporary architecture.

To assist with the proportions of the building and its sense of repose in the landscape we have introduced a horizontal split in the elevation establishing a low level and high level material. This has the effect of reducing the overall visual mass of the elevations within the woodland.

The proposed bronze-coloured material for the upper level will tonally complement the woodland setting but will also maintain a low sheen and reflection.  By manipulating contrasting tones of material on different planes we have been able to introduce depth and pattern to the elevation. Brickwork is proposed to the low level area. The brickwork colour and texture is intended to have a parity with adjacent brick buildings. Architecturally, this creates a ‘monolithic’ base on which the more ‘open’ upper facades appear to sit, echoing the traditional and Classical forms of Stowe House.

We have been anxious to make connections with the historic estate through materiality but also through geometry. Many of the buildings and follies on the estate take their architectural proportioning from classical design principles. As part of the creative narrative behind the building and as a proportioning system we have adopted the golden ratio (Golden section) to compose the colonnade elevation.

The building will play a central role in ensuring the continuing success of Stowe School as an outstanding centre for Product Design and Robotics in the UK.

David Gausden, Director at Design Engine, said: “We have been working closely with engineers Buro Happold to explore how the building can serve as an educational tool, to illustrate how different materials are employed as structure and fabric. The interior of the building will be developed to reveal how materials are connected, and how spaces are serviced. We hope the building will fuse the act of drawing and making, helping to inspire a new generation of creative individuals and problem-solvers.

Dr Anthony Wallersteiner, Head, Stowe School, said: “The Design Technology & Engineering Centre at Stowe is unashamedly modernist, but follows classical principles; it is bold and innovative, but sits discreetly in the sylvan landscape. The architects of Design Engine are following in the footsteps of Adam, Kent, Borra, Soane and Gibbs. I am confident that Design Engine will produce a superb building which will in turn take its place among the architectural wonders of Stowe.” 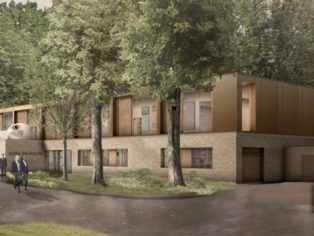