Transport facilities are subject to heavy footfall and tiled flooring offers an aesthetically appealing and hard-wearing solution in this environment. But even the most resilient surfaces are vulnerable to damage after installation. Judith Mawtus, general manager at Dural UK, offers expert advice on preventing cracks from appearing on a client’s flawless floor

Consider the stresses a building is under during its life cycle, expanding and contracting in all directions. Imagine if the floors were sheets of glass, any slight movement and they would crack, break up or shatter.

A subfloor construction within a typical commercial building is commonly laid in sand and cement rafts in bays of approximately 6m by 6m. Each raft will take on average a full mm of depth per day to dry out and as they do they shrink in size. This natural drying time can be a problem if the project completion date is time critical.

All hard flooring moves independently by expanding and contracting at different rates so it is a requirement for flooring installations to have movement protection.

A time-saving solution is to lay decoupling matting directly over the subfloor. It can be put in place as soon as the subfloor is dry enough for a person to walk over it. Air channels in the matting allow the subfloor rafts to continue to dry out in a con- trolled way by preventing the top layer of the screed drying quicker than the bottom. This slow drying period leads to a stronger subfloor. The edges of the subfloor will curl upwards if the top dries quicker leaving an uneven surface.

Decoupling matting prevents the subfloor shrinkage and cracking from being passed into the newly laid surface tiles.

Tiling directly onto the rafts that are not chemically dry and without matting will almost certainly cause random ‘lightening flash’ cracks in the surface tiles and they could potentially ‘tent’ or pop off the subfloor.

All subfloor rafts will move independently over time as buildings expand and contract horizontally and vertically due to ambient air temperature and below-ground water table fluctuations.

To isolate this problem a movement absorber is needed in the surface tile directly over the subfloor movement void between each raft. This comes in the form of a Movement Joint (MJ). Bedded into the adhesive under the tiles the movement zone of the joints allows movement to occur in all directions and iso- lates stress in the tiles from one raft to its neighbour.

Movement Joints and decoupling matting are specified on all types of transport projects and other projects where there are large expanses of hard flooring, projects such as retail, commercial and large domestic dwellings.

Movement Joints are available in PVC, aluminium, stainless steel and brass. Unless cost is an overriding issue PVC profiles are not used. They’re a short-term solution and lack the durability needed for tiled flooring. Aluminium-based profiles will adequately protect the majority of projects. Stainless steel profiles provide the greatest strength and are the least visible due to the design of the profile, these are ideal for Transport projects.

It’s advisable to use movement joints designed to exceed BS5385. For a seamless designer look they can be specified in any of the RAL colour scheme range and if a tile sample is sent to the MJ manufacturer, an exact colour match is achievable even if the tile has a speckled effect. This upholds the beauty of a seamless tiled flooring scheme.

Clients generally don’t like movement joints because it’s felt they can be obtrusive and spoil the aesthetic appearance of their carefully chosen floor. An added complication is that they have to be positioned directly above the sub-floor void between each raft. If the position of the subfloor MJ has not been considered at an early design stage then it could end up running through the middle of the floor like a scar and rather ugly if the floor finish has a intricate surface pattern.

In some instances however designers take advantage of the position of the subfloor MJ such as at Barnsley Bus Station. The MJ on the surface followed the grid pattern in the subfloor which created an affective geometric design so in this instance there was no need to try to hide them using coloured MJs.

By incorporating decoupling matting and movement joints into early design concepts, architects and contractors can be confident their clients will have seamless tiled flooring that will remain permanently crack-free. 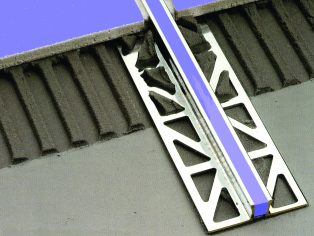 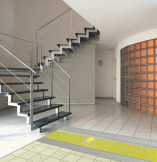 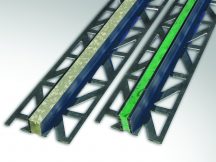 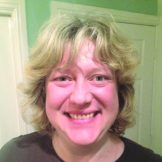 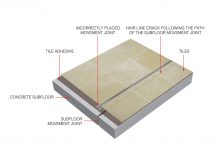